Is Great Britain Preparing for a War with China? 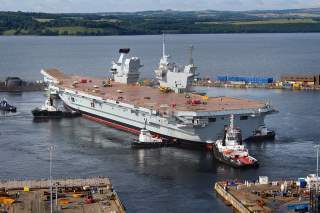 The Pacific Ocean does not exactly bubble with happy memories for Britain. In December 1941, Japanese torpedo bombers sank the battleship Prince of Wales and the battlecruiser Repulse off Malaya. In early 1942, the Japanese captured eighty thousand British soldiers at Singapore.

Already overstretched fighting the Nazis in Europe, Britain couldn’t do much in the Far East during World War II. For almost a century, America has been the big stick in the Pacific.

So why is Britain vowing to send its military muscle to the Pacific?

Kim Darroch, the British ambassador to the United States, recently told a Washington think tank that Britain will send aircraft carriers to the Pacific once they become operational in the 2020s. Four Royal Air Force Typhoon fighters, which arrived in Japan in October for joint exercises, are scheduled to fly over the South China Sea.

“Certainly, as we bring our two new aircraft carriers onstream in 2020, and as we renew and update our defense forces, they will be seen in the Pacific,” Darroch announced. “And we absolutely share the objective of this U.S. administration, and the next one, to protect freedom of navigation and to keep sea routes and air routes open.”

Naturally, Beijing warned that these moves could threaten relations between China and Britain.

There are two questions here. The first is technical: What exactly does Britain think it can accomplish militarily against China? The Royal Navy is now down to just nineteen destroyers and frigates, and is phasing out its antiship missiles, leaving British warships to slug it out with cannon like the Grand Fleet at Jutland in 1916. The Royal Air Force is shrinking, and the British Army has fewer infantrymen than were killed on the first day of the Somme in 1916.

Compare this to China, whose defense spending has surged 12.9 percent per year between 1989 and 2011. Even with the Chinese economy slowing, the defense budget was still expected to increase by 7.9 percent in 2016.

Assuming the Queen Elizabeth–class carriers and their F-35B aircraft are ready by 2020—two big ifs, given the history of these two programs—then each carrier will accommodate perhaps fifty aircraft at most, including F-35B vertical/short takeoff and landing strike fighters, as well as assorted airborne early-warning and antisubmarine aircraft and helicopters.

If the Americans, with their bigger carriers and sophisticated Aegis-equipped escorts, are worried about Chinese submarines, hypersonic weapons and carrier-killer ballistic missiles, how would a British carrier task force fare? If a time warp could take a Queen Elizabeth battlegroup back to 1982, it could possibly take on the entire Argentine air force and navy. But China in 2020? Not likely.

Which in turn brings up the question of what Britain hopes to accomplish. As a means of asserting British influence in East Asia, the British military presence probably won’t help much unless London is prepared to somehow wield a bigger stick (nuclear weapons don’t count—China has them too). As deterrence against a Chinese attack on Taiwan or Japan, if Beijing isn’t afraid of the United States, then it’s not likely to be afraid of Britain.

Militarily, despite some claims that Britain could defeat China under some conditions, this seems a risky proposition at best. With Chinese GDP almost five times greater than Britain’s, it is a proposition that will only get riskier. In the high-tech arms race between America and China, Britain simply doesn’t have the resources to compete.

Nor should it. Regardless of what China does, there is still the emerging Russian threat in Europe. Wouldn’t it make sense to concentrate the Royal Navy in Europe and the Mediterranean, as in World War II, and let the United States worry about the Pacific?