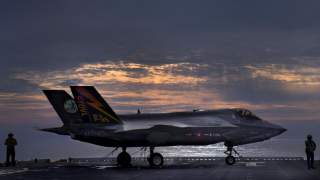 Despite the United Kingdom’s recent vote to leave the European Union, London will remain a key ally of the United States in the decades to come.

Even as London begins to implement ‘Brexit,’ Washington is committing to a closer military relationship with its British partner. Indeed, as an indication of just how close the two allies remain, the United States has agreed to deploy Lockheed Martin F-35B Joint Strike Fighters onboard the Royal Navy’s soon to be commissioned Queen Elizabeth-class carriers. Moreover, the United States might allow British-owned F-35B jump jets to deploy onboard U.S. Navy vessels.

“Today I can welcome the commitment of the United States to deploying F-35s on the first operational deployment of Queen Elizabeth—the HMS Queen Elizabeth in 2021,” British secretary of state for defense Michael Fallon said during a joint press conference with U.S. secretary of defense Ashton Carter on Sept. 7.  “And in the fullness of time, we expect our F-35s to be welcome on the American carriers in like for like.”

Carter, for his part, stated that the United States respects Britain’s decision and said cooperation between the two nations will continue and even deepen in certain areas. “The United States respects the decision of the British people on Brexit.  And we're committed to continuing and building upon our broad-ranging military, political and economic cooperation,” Carter said. “That's because Brexit does not change at all all that our countries have to do together.  It doesn't change all that binds our people together.  And it certainly does not change how we will partner together to meet the challenges and seize the opportunities and defend the principled order in a rapidly changing world and amid new threats to the trans-Atlantic community.”

One area where London and Washington will deepen their cooperation is in the realm of cyber-warfare. “Our special relationship is, as Michael noted, also becoming a cyber relationship,” Carter said.  “Just today, we concluded a memorandum of understanding, the first of its kind, to share more information and carry out vital research and development together to advance our offensive and defensive cyber capabilities.”

Additionally, while the United States and Great Britain will continue to partner on defeating ISIS in the Middle East and maintaining stability around the globe, one of the renewed focuses of the transAtlantic partnership is the resurgent Russian threat. The United States still expects that London will use its influence in Europe to prod other NATO allies into meeting their defense spending commitments.

“The British military is doing so much around the world on its own, as part of NATO and with the United States, all three,” Carter said. “It's increasing its personnel contributions to NATO's Resolute Support mission in Afghanistan.  We're grateful for that.  It's also strengthening our collective deterrence against Russia, as well as leading in the NATO alliance not only by keeping its pledge to spend two percent of GDP on defense, but also in the field.”

Thus, even as Britain starts to plot a new course away from the European Union, Washington and London will maintain the strong partnership that was forged in the Atlantic Carter in August 1941 onboard USS Augusta and the HMS Prince of Wales off the Newfoundland coast.

“In a time of change and a time of challenges to our two nations have built and defended, we have to continue to do so together.  And as we do, we must not be afraid of change or intimidated at the challenge or doubtful of our capacity to meet it.  We must not flinch at the rock and tempest's roar or be distracted by false lights on the shore,” Carter said in a Sept. 7 speech at the University of Oxford. “Instead, we've got to sail on, sail on together for our national and shared interests, for the principles and values embodied in the Atlantic Charter, for the principled international order that has continued to serve us all so well.  As we do, we must remember that the hearts and the hopes of the world are with us.”