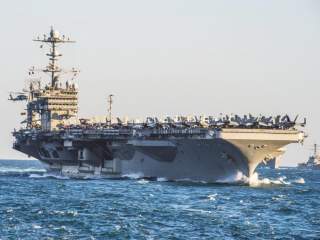 President Barack Obama’s 2017 defense budget proposal refocuses the Pentagon on great power conflict—or in other words, Russia and China. Both nations are becoming more aggressive along their peripheries, which means that even as the United States continues to cooperate on certain issues with both countries, Washington must be prepared to compete with Moscow and Beijing over the next twenty-five years.

“The most significant shift in the future security environment—and that is a return to an era of great power competition,” Deputy Defense Secretary Bob Work said during a press conference at the Pentagon on February 9. “Today, we are faced by a resurgent, revanchist Russia and a rising China. Both are nuclear-armed powers. Both are fielding advanced capabilities at a rapid rate. Both are permanent members of the UN Security Council, and both take issue with some aspects of the principled international order that has preserved stability and enabled the peaceful pursuit of prosperity for decades.”

As such, the administration is requesting a total of $582.7 billion—$523.9 billion in the base budget and $58.8 billion in overseas contingency operations (OCO). The total conforms to the Congressional Bipartisan Budget Agreement (BBA) that was reached in 2015.

According to Work, the United States—as directed by Defense Secretary Ashton Carter—will focus on three items to address the challenges. “First, we should prioritize strengthening our conventional deterrent against the most advanced potential adversaries. When doing so, he didn't expect us to match advanced adversary capabilities, either numerically or symmetrically,” Work said. “He instead told us to offset their strengths using new technological, operational and organizational constructs to achieve a lasting advantage and to strengthen deterrence.”

Moreover, the Pentagon will focus on the quality and capability of its forces rather than the size of those forces. As Work explained:

“Second, with respect to the services, the secretary [of defense] asked us to focus far more on shape than size. He asked us to try to achieve the best balance of capacity, modernization, and readiness within the existing budget level—seek that balance.  And in terms of readiness, he expected us to focus on reconstituting full spectrum readiness.”

“If you take a look at last year's plan, the Navy was going to build up to 321 ships and then come down.  And we asked ourselves, what can't we buy because we're going from 308 to 321?  We said, well we can't buy a lot of capability. And so it was a very—and this is not an indictment against the LCS.  If we didn't like the ship we would stop buying it.  But those twelve ships would take us from 321 to 309 ships.  And it allowed us to put more money into torpedoes, more money into P-8s, more money into advanced munitions, more money into tactical aviation.”

But readiness, training and the most modern weapons of the moment aren’t everything, the United States will need to invest heavily to maintain its technological edge into the future.

The new budget will have an immediate impact on the services. “For the Army, it supports the ongoing transition back to high-end combat and full-spectrum capabilities,” said vice chairman of the Joint Chiefs of Staff, Air Force Gen. Paul Selva. “[The budget] invests in the Navy's lethality through improvements in surface capability, tactical aircraft and investments in advanced undersea capabilities. It maintains the Marine Corps' preeminent role as the Nation's most capable expeditionary response force," Selva said. He added that "for the Air Force this budget invests in high-end capabilities across the range of domains that we expect our Air Force to respond in, while attempting to improve readiness through training for the high-end fight.”

However, while the Bipartisan Budget Agreement brings much needed stability to the defense budget after a number of tumultuous years, some sacrifices had to be made. Modernization accounts took the brunt of the hit—but the Pentagon has tried to be smart about what it cut. “We went to the modernization account, which tends to be the most volatile. And that's where we had to take some risk, both—so you'll see, for example, twenty-four less Black Hawks, five less Joint Strike Fighters for the Air Force; fewer V-22s. The aircraft procurement accounts, in total $4 billion less; less money for shipbuilding,” said Pentagon comptroller Mike McChord. “These are all not—you know, these are not maybe things that we love to do, certainly, but as we talked about protecting readiness recovery, that people are our most important asset, and with the kind of inadvisability of trying to make a rapid change in force structure based on a fairly short-term budget signal of a two-year deal, this is where we had to go.”

The reaction from Republican majority in Congress was tepid. “I am disappointed that this request does not adhere to the budget agreement made just last fall. Last year, Congress passed the Bipartisan Budget Act, which establishes a minimum level of funding for our military,” said Rep. Mac Thornberry (R-TX), chairman of the House Armed Services Committee (HASC).  “I hoped such an agreement would provide some budget stability and begin to rebuild our military. Unfortunately, this Administration continues to play budgetary games with our country’s security and diminishes what credibility it had left.”

Rep. Randy Forbes (R-VA), chairman of the HASC Seapower and Projection Forces Subcommittee said that he was pleased to see an increased focus on high-end capabilities. “Although I am generally pleased to see increased investment in some of the high-end capabilities that I have been championing for years, I am concerned by the proposed force structure cuts including $7 billion in cuts to Navy ships and personnel,” Forbes said. “President Obama has forced our armed services to choose between capability and capacity, but the undeniable reality is that our military needs more of both. It is now up to Congress to correct these errors and place our national security on a stronger footing.”

Congressional Democrats were—as one might expect—kinder to the budget rollout. “I want to fully understand the President’s budget proposal before making any decisions on overall funding levels or individual programs, and I welcome a debate about the appropriate funding for FY17 for the Department of Defense to ensure that our military has the resources that it needs,” HASC ranking member Rep. Adam Smith (D-WA) said. “Moving forward, I hope that my colleagues on both sides of the aisle will join together to support members of our military and their families while strengthening American diplomacy and development as part of a truly holistic approach to national security.”