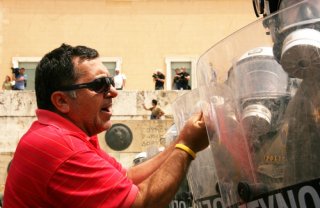 Greece’s domestic turmoil is well documented, but Greek foreign policy over the past three months has been equally fraught with turbulence, frustration and failure.  For despite the coming to power of Syriza—a vigorous, outwardly uncompromising and almost revolutionary party of government—the Greek state has found it impossible to dislodge the formidable exogenous structures blamed for worsening the country’s economic woes.  The episode reveals much about the plight of small states on the world stage, especially during “hard times.”

Syriza was elected three months ago on a platform of opposing austerity.  In 2010 and 2012, Greece’s former leaders had accepted fiscal restraint and economic restructuring in exchange for massive economic assistance and Greece’s continued participation in the Eurozone.  But in campaigning for office, Syriza insisted that this plan to rescue the Greek economy through swingeing cuts to public expenditure was riddled with internal contradictions.  Austerity was causing economic hardship, not alleviating it, Syriza and others argued; fiscal restraint was a form of collective punishment—an inherently unjust and ineffective means of responding to the economic crisis.

For Syriza, the solution was to cow the country’s creditors into renegotiating the terms of the Greek bailouts.  This could readily be achieved if only Greece was to speak with unity and confidence, it was suggested.  In effect, the party’s leaders promised voters that obtaining a better settlement for Greece was simply a matter of standing up to the so-called ‘troika’ of the International Monetary Fund, the European Central Bank and ministers from the Eurozone countries.  Greece need not be a passive recipient of others’ foreign economic policies; instead, the country had the capacity to chart its own path on the world stage.

To date, this program for action appears to have been premised on false assumptions.  For the most part, Greece has been thwarted in its negotiations with Berlin, Brussels and the IMF.  The reason is simple: however popular the Syriza government might be domestically, it comprehensively lacks the bargaining power necessary to force creditors to restructure the terms of their loans.  Eurozone countries in particular have their own vital interests at stake when it comes to how the Greek problem is dealt with; they must be mindful of how special treatment for Greece will affect other members of the single currency.  Moreover, politicians like Germany’s Angela Merkel must cater to their own constituents before they pay heed to the demands of the Greek electorate.

Spurned by its supposed friends, Greece has looked elsewhere to gain leverage.  Prime Minister Alex Tsipras recently visited Moscow, for example, reportedly in an attempt to secure financial and trade concessions from Vladimir Putin.  While abroad, Tsipras insisted that Greece is “a sovereign country with an irrevocable right to conduct a multi-faceted foreign policy,” thus raising concerns in the west that Greece was preparing to break ranks with its European partners.  In the event, however, no economic lifeline was forthcoming from Moscow, an outcome that further highlights the weakness of Greece on the world stage.  (Worse still, Tsipras’s condemnation of western sanctions upon Russia might even have left Greece in a weaker position vis-à-vis the troika than before).

In another foreign policy gambit, the Syriza government has resurrected Greek claims to financial compensation from Germany for crimes committed by the Nazi regime during the 1940s.  First raised as a serious issue in February, Athens clarified earlier this month that it was seeking €279 billion (over $300 billion) in reparations.  Unsurprisingly, this gargantuan sum of money has been dismissed by Berlin as mere propaganda (Germany paid millions in compensation to Greece during the 1960s).  Although Greece’s submissions are being taken seriously by some scholars and international lawyers, it is unlikely that any legal attempt will succeed in extracting money from the German treasury.  But nor are any political objectives likely to be satisfied by this particular diplomatic offensive: while Tsipras is probably hoping to improve his bargaining position vis-à-vis Germany by playing on its war guilt, raking up Nazi-era crimes is more likely to worsen Greece’s external relations than anything else.

What the past three months show is that Greece’s leaders are stuck between a rock and a hard place.  At home, heavy expectations have been put in place that the Syriza government will seize for Greeks a more just international settlement.  A promise has been made that international-level improvements will result from domestic-level pressure.  But the truth is that Tsipras and his co-partisans have very few tools with which to make good on these promises.  Greece is a comparatively small and weak country trying to make deals with relatively rich and powerful neighbors.  The result is that Athens is saddled with an unforgiving set of obligations that its current crop of leaders can neither discharge nor disregard with ease.

Thucydides’s maxim never seemed so appropriate that, in international politics, the strong do what they can while the weak suffer what they must.  Alex Tsipras and Syriza are making a spirited effort to defy this law of power politics.  But the evidence to date shows that their efforts have yielded few positive results.