"On Greece, it is clear that Merkel has failed the test of statesmanship." 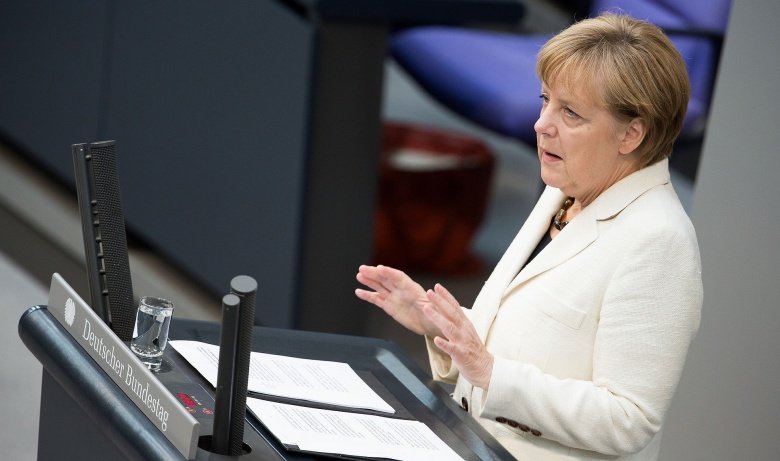 In Greece, with one in four unemployed, the people have voted (once again) for an end to self-defeating austerity imposed from abroad. In Brussels and in Berlin, officials and ministers declare their loyalty to a 'European' vision of monetary and fiscal rectitude that might have borrowed its name from Foucault ('discipline and punish') or Dostoyevsky ('crime and punishment'). Across the whole southern half of the continent—from the Pillars of Hercules to the outer approaches to the Hellespont—unemployment has robbed a generation of a future.

Only a decade ago, Europe was mostly remarkable as a place where history had stopped. Nothing symbolized this more than the euro. Today, the single currency is the emblem of a crisis not just in Europe's stagnant economy but in the whole idea of European political unification.

Greece's sins—and there are many—have been endlessly detailed. Cooked books. Corruption. Waste. In Denmark, where I live, the story stops here: profligate Greeks.

But Greece has not imposed a depression on itself. If Athens' economic position in 2010 was parlous, by 2012 it was catastrophic. What brought this about was not Greece's failure to stick to the medicine meted out to it, but the medicine itself. We now know that even the IMF questioned the remedies ceaselessly recommended.

But Germany, above all, insisted. In the middle of a global recession unprecedented in severity since the 1930s, there would be drastic cuts to pensions and welfare spending; an admittedly bloated public sector would lose thousands of jobs; the rights and conditions of those still in work would be dramatically eroded; national assets would be sold off at fire-sale prices. What's more, Berlin would do nothing to stimulate demand at home or elsewhere in the Eurozone to compensate for its collapse in the Aegean. On the contrary, Germany, with a trade surplus greater than China's, would make a budget surplus a requirement under federal law.

What explains Germany's behavior? The first part of the answer can be found in the personality of its chancellor.

At the end of last year, Angela Merkel was the Western world's favorite politician. Responding to the global interest, a long and revealing biographical essay in the New Yorker notes “scientific detachment” (Merkel is by training a quantum physicist), “caution under dictatorship” (she grew up in East Germany) and “reticence” as her defining personal qualities. A senior German official described her as “about the best analyst of any given situation that I could imagine...She looks at various vectors, extrapolates, and says, "This is where I think it's going."”

But in regard to Greece, that only raises the question: did she? Is this really where she thought it would end? Is this, in fact, what she wanted?

Certainly, Greece needed reform. But Merkel is on record as saying that she never considered Greece fit to join the euro. The punishment for Athens' profligate dishonesty should be so tough that, in her words, “nobody else will want this.”

Usually praised for her foresight, Merkel has led Greece and Europe to the brink by failing to see what should have been obvious from her much-vaunted reading of German history: that cutting public spending in the middle of a global recession to satisfy the demands of foreign creditors would create the depression-like conditions that have ever been a boon for political extremists; and that, if such measures were forced upon Greece by a foreign government, the principles of democratic politics on which the EU is built would be flagrantly undermined.

But what matters to Merkel is not Europe but Germany. She can (and does) take Europe for granted. As Merkel's predecessor Helmut Kohl is quoted as saying in the New Yorker, she is interested in power, and Germany is its base.

The New Yorker notes that, as a former East German, Merkel has a real commitment to the overriding importance of personal freedom and national self-determination (note her many statements, for example, on Ukraine). But she is nonetheless ‘a learned democrat' and a learned Atlanticist. And growing up a world away from the 1950s and 1960s 'fathers of Europe' (de Gasperi, Monnet, Schuman and Spaak), she's no less a learned European. Far less than her predecessors Kohl or Gerhard Schröder, thinking like a European doesn't come at all naturally to her. And the crisis has shown it.

In Germany, her policies are wildly popular.

The country's most popular politician for over a decade (if she has recently lost that position to her Finance Minister Wolfgang Schäuble, it's because he's seen as even more a monetary and fiscal disciplinarian than she is), Merkel is known to her people as Mutti ('Mum'). She's perfectly in tune with Germans' perception  of debt as a sign of moral failing, the legacy of a Lutheran mentality compounded by the still traumatic memory of 1930s Weimar hyperinflation and the red carpet it laid for the Nazis.

Among others, Thomas Picketty has pointed out that, in 1955, saddled with the costs of two world wars, West Germany was itself the recipient of the kind of debt relief that Germans would deny Greece today. Its late enemies, including Britain, France and Greece, wrote off half the national debt. “Fortunately.” Picketty observes, “we were more intelligent (then).”

But Greece's (and Europe's) tragedy is that Germany's instincts are stronger than its memories. And there's nothing in Merkel's personality or experience to lead her to jog those memories. Germany's tragedy (and Germany will suffer too from this debacle) is that Germans' own interests could only be defended by acting in contradiction to their supposed national values and perceived (but not, it bears repeating, their complete actual) history.

This is not unusual. In 1957, Henry Kissinger observed that:

“The whole domestic effort of a people exhibits an effort to transform force into obligation by means of a consensus on the nature of justice. (…) But the international experience of a people is a challenge to the universality of its notion of justice, for the stability of an international order depends on self-limitation, on the reconciliation of different versions of legitimacy.”

That is, foreign policy is challenging because it can often demand a course of action that would be rejected as wrong or unjust in a domestic setting—even adherence to a quite different set of values from those that form the basis of domestic peace.

“Not for nothing,” Kissinger continued, “do so many nations exhibit a powerful if subconscious, rebellion against foreign policy, which leaves the travail of the soul inherent in arriving at decisions unrewarded, against this double standard which considers what is defined as "justice" domestically, merely an object for negotiation internationally.”

If Germany's mistakes with regard to Greece have a single cause, it is that the country has misidentified a foreign-policy problem as one of domestic policy, and erred in its remedies accordingly. For the resolution of the Greek debt crisis demanded the domestically indefensible: debt forgiveness or its mutualization through the issue of common 'euro bonds'; looser Eurozone interest rates and looser German fiscal policy; and the initiation of a serious movement towards a more complete fiscal and political union.

Faced with the challenge, the German governing class balked. It resorted to all it knew about itself, ignoring what it could learn from the study of the world around it, even as far as declining to consider Germany's own place within in it. When Kissinger writes that “a statesman will tend to have great difficulty legitimizing his policy domestically, because of the incommensurability between a nation's domestic and its international experience,” it's noteworthy that, especially on Greece and the euro, Merkel has not encountered any such difficulty.

On Greece, it is clear that Merkel has failed the test of statesmanship.

It is quaint now to recall British Prime Minister Margaret Thatcher and French President François Mitterand's opposition to German reunification in 1990. Even then, the idea of German tanks in London or Paris was absurd. But what if what their fears were justified not by World War III but by the rise to a position of leadership of a power unready for the burden of its responsibilities? (Their consternation at Bonn's precipitate 1991 recognition of Slovenian and Croatian independence was a sign of things to come.)

For the duration of the Cold War, such a foreign policy as Germany had ('Ostpolitik') was in fact domestic policy: the reunification of East Germany to the West. Germany was reunited in 1990. That it has struggled ever since to define its post-reunification goals in Europe and the world is a truism. Yet even more than West Germany during the Cold War, East Germany, whose leadership took directives religiously from Moscow, was a country without a foreign policy. So where, in the East before 1989 or in the West thereafter, would Merkel have learnt the principles of sound foreign policy? Where, more to the point, would Germans?

From the start, Merkel has been committed to making sure that Germany's domestic experience of the euro crisis was to all intents and purposes the only relevant experience of the crisis at a European level. This was a successful strategy for ensuring her domestic popularity, and the German population hasn't challenged it (nor has Germany's strange kind of democracy helped stimulate debate; the Government is as a grand coalition of the country's two largest parties; there's effectively no Opposition). But it was disastrous when it came to ensuring Germany's long-term interests. Already Berlin is having trouble where in the recent past it has always succeeded: lining up the leaders of the Eurozone's other big states (France, Italy and Spain) behind its positions.

Make no mistake. The Greek referendum was a defeat of German leadership in Europe.

True, whatever happens from here, the economic pain will fall on Greece and its people. But the big loser from last weekend's far-from-pointless referendum will be Germany. Whether a new deal is reached which still contains the element of 'punishment' the German Government considers so important to impose, or Greece defaults and leaves the euro, Germany will have shredded its claim to leadership in Europe. For that leadership will have been shown to rest not on consent or voluntary submission to a strong Germany claiming to act in the interests of all, but on force and the threat of economic Armageddon.