Hagel's Fate Was Sealed Long Ago 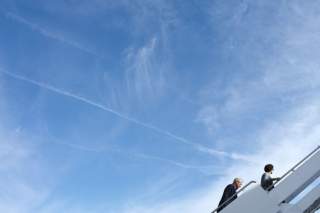 To the surprise of many, Secretary of Defense Chuck Hagel resigned his post Monday, apparently under heavy pressure. According to some accounts, this development has been brewing for weeks. In reality, it was presaged nearly two years ago in the former Army sergeant and Nebraska Senator's farcical confirmation hearings before his one-time colleagues.

Writing at the time in this space, I defended Hagel's "fumbling and apologetic" answers as a byproduct of the political theater in which Senators were trying to score points with the voters back home and the nominee had to absorb their punches, many of them score settling for his turning against the Iraq War, as the price for ultimate confirmation. I observed that "Hagel is that rare public official who's always said what's on his mind and voted his conscience on the issues without much caring what anyone thought about it" but that, in the hearings, "For perhaps the first time since Basic Training, he wasn't free to speak his mind."

As it turned out, that didn't change once he took the helm at the Pentagon. Instead of having to placate those Republican Senators who saw their erstwhile colleagues as a turncoat for having switched sides on an unpopular war and then agreed to work for a Democratic president, he'd have to defend contradictory administration policies in the Middle East--where among other things we were on both sides of a civil war in Syria, simultaneously bombing ISIS, aiding their allies in the Free Syria Army, and opposing the Assad regime they are both against--while pretending we were pivoting to Asia and shifting to a peacetime force posture. Hagel was visibly unenthusiastic with his role, often appearing disengaged while, if reports are to be believed, often actually left out of the policy discussions.

Before leaving for my present position last August, I spent six years at the Atlantic Council, where Hagel served ably as chairman until taking over the Defense Department. His predecessor, General Jim Jones, had been picked to join Obama's "team of rivals" as National Security Advisor. Both men were highly accomplished public servants, widely respected by Republicans and Democrats alike for their competence, intellect, and integrity. Indeed, Jones may very well have been selected as National Security Advisor or another prominent role had John McCain prevailed in 2008. (Interestingly, Hagel was followed by Jon Huntsman, the erstwhile Republican governor or Utah and presidential candidate who'd alienated his base by serving as Obama's ambassador to China.)

In both instances, the qualities that got them chosen made them poor fits. In an administration that sees foreign policy as an extension of domestic policy, simply asking "What's in the US national security interest?" isn't enough. In case after case, the administration chose half measures that would appease the Democratic base while minimizing criticism from Republicans on the "weakness" front.  So, they announced a military surge in Afghanistan that was far less than requested by the commanding general while simultaneously announcing a premature deadline for withdrawal. They authorized military action against the Gaddafi regime in Libya, the Assad regime in Syria, and against ISIS in Iraq and Syria but without any obvious consideration of the strategic consequences.

It didn't help that Jones and Hagel were outside the inner circle of foreign policy advisors that Obama had brought with him from the campaign and the Senate. Their willingness to work across the aisle may have won them plaudits from the broader foreign policy community but it meant that they would never be trusted team players. They were constantly being sniped at by anonymous staffers in the press and were ready scapegoats for failed or unpopular policies. Meanwhile, the president has shown steadfast loyalty and infinite patience with Susan Rice and others.

Among the reported reasons for the president wanting yet another change at the top of the Pentagon—Hagel’s successor will be the fourth in Obama’s less than six years in office—is that Hagel has frustrated the longstanding administration goal of closing Guantánamo by pointing out the problems of repatriating detainees to Afghanistan and that he’s clashed with Rice on the Syria issue, pointing out that the administration’s Assad policy is at odds with itself. Being obviously right, apparently, is not a defense.

Ashton Carter is among the top names being floated, again, for the post. But whoever gets the nod is going to face the same obstacles as Hagel if national security policy continues to be seen as the extension of an unending electoral campaign. An astrategic strategy won’t be any less so by changing the faces at the table.

Image: US Department of Defense.