A Hawkish Hillary Clinton Upsets Friends and Gets Labeled 'Trumpian' 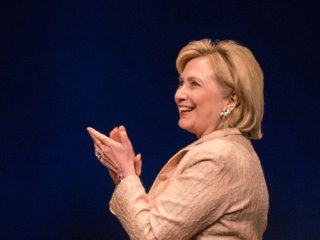 While various industries have waxed and waned in the United States, the nation's undisputed lead in information technology remains a constant. Many countries have produced one, two, even a handful of entrepreneurs with a bright idea that made them billions, but the United States churns them out. In Silicon Valley, success feeds on success as entrepreneur turns investor and often goes on to repeat the cycle again and again. The place has power. Many of the industry's leaders meet regularly with U.S. political leaders and the sector has firm views on what should change in areas such as education, immigration and trade. One of their own, Carly Fiorina, a one-time CEO of Hewlett Packard, is among those seeking the Republican nomination, but in recent years the industry's support has trended Democrat. This Business Insider piece describes attributes of a particular breed, the tech Democrat, and how they have influenced the party.

Right now though, many are none too pleased with Hillary Clinton.

On December 6 at a Brookings Institute event, Clinton suggested the government should use tech companies to block or take down ISIS Web sites, video and encrypted communications. The comment came before the Republican debate in which Donald Trump suggested shutting down the web in Syria, but while his suggestion could be laughed off by the tech industry, Clinton's comments were not as easy to dismiss, especially given the sense of betrayal. As the New York Times noted:

“Over the past year, technology firms have made clear they do not want to be in the position of ideological censors. And Mrs. Clinton herself was a major advocate, as secretary of state, of programs that expanded Internet access to get around the censorship of repressive societies, starting with China.”

The tech industry has always tussled with governments on striking the right balance between access for those who want to enforce the law and privacy for everyone else. In the United States, since Edward Snowden exposed what the National Security Agency had been up to, much of the debate has focused on 'backdoors,' technical entry points that would give authorities a route to user data. The industry's majority view on the subject was recently summed up by Apple chief executive Tim Cook, who said backdoors are not a solution because “You can't have a back door that is only for the good guys.”

In Saturday's Democratic Party presidential debate, Clinton suggested there should be a Manhattan-like project (referencing the World War II atomic bomb exercise) to bring the government and tech communities together so law enforcement can prevent attacks. And then she went on to say:

“Maybe the backdoor isn't the right door, and I understand what Apple and others are saying about that. I just think there's got to be a way, and I would hope our tech companies would work with the government to figure that out.”

Cue the brickbats. This is The Verge on the Clinton statement:

“None of that makes any sense, of course. Figure out a way to do what? Breach fully encrypted communications? (That's called a backdoor.) Improve information sharing between industry and government? (We already have PRISM and CISA.) Clinton's non-answer here is essentially Trumpian: don't worry about the details, the experts will figure it out.”

“The real concern is that backdooring encryption means that everyone is more exposed to everyone, including malicious hackers. You create a backdoor and you open up the ability for malicious hackers from everywhere else to get in.

“So, she's trying to walk this ridiculously stupid line in trying to appease everyone. She wants the security/intelligence officials to hear 'Oh, I'll get Silicon Valley to deal with the 'going dark' thing you're so scared of,' and she wants the tech world to hear 'Backdoors aren't the answer.' But, that leaves a giant 'HUH?!?' in the middle.”

Clinton's comments also prompted this tweet from Edward Snowden to his 1.7 million followers:

Aaaaaaaaand Hillary just terrified everyone with an internet connection. #DemDebate

No doubt the Clinton camp will be pleased to place Snowden in their non-supporters camp. And the bottom line for many of the now fuming tech Democrats is that by the time the election proper rolls around, they are unlikely to have any option other than Clinton. In the early voting states, Clinton leads in Iowa and Sanders is ahead in New Hampshire but nationally this Washington Post-ABC News poll suggests Clinton is favored by 59 percent of Democratic-leaning voters with only 28 percent putting Sanders first. No doubt many hope President Hillary Clinton would be more like the Hillary Clinton who was secretary of state than the furiously campaigning politician they are watching now.

Emma Connors is managing editor of the Interpreter, where this article first appeared.