Heavy Armor: The Tank’s Role in the Future of War 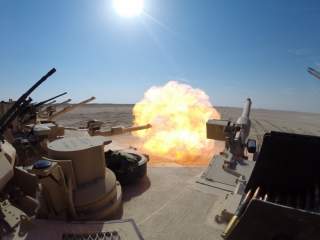 Recently, an article was posted on War is Boring concerning the first arrival of U.S. M1 tanks in the country of Georgia for an exercise. In response, I posted the following on Twitter.: "Slow" -relative. The Speed that matters isnt about getting into the greasy grass quickly, its about winning there.

This thought is short for Twitter’s sake and a reference to Custer and his foray up the Little Big Horn, a river the Lakota Sioux called the Greasy Grass. One recalls that his expedition doesn’t end well, partly for leaving cannon and gatlings behind in favor of travelling light.

This brings us to the present day with all the questions of the utility of the tank as we look at the past decade of counterinsurgency fighting. The future of the tank is secure. Men first mastered animals to move faster on the battlefield than their foes afoot, and it continues today. Men build machines that are faster, but more importantly to protect them from weapons on the field, and enable them to carry more devastating firepower than they could on foot. This is the magical combination of mobility, firepower, and protection that all armored vehicles balance in some way, shape, or form.  And remember, before the U.S. embarked on a long COIN fight in Iraq, tanks and infantry vehicles fought and bested Iraqi tanks and BMPs in armored slugging matches that superior soldiers and equipment won at every turn.
We must not forget that the tank was not developed to defeat the tank. It was developed in World War I to defeat the machine-gun and to penetrate layered defenses in torn terrain. The ultimate goal was to  to restore mobility to the infantry, punch holes in the defense, and unleash cavalry to exploit those holes. The chore remains virtually unchanged since the British deployed tanks at Cambrai in 1917. The tank enables maneuver. But as the British learned in the mud of the Western Front, the tank restores maneuver to the battlefield only when coupled with all arms—fires and aviation—including that which air forces bring.

(This article originally appeared in the Strategy Bridge)

The modern combination of armored and motorized forces enabled with fires, both Army and Joint, supported by rotary and fixed-wing aircraft allow U.S. military forces to operate at a tempo that quickly strips its adversaries of their situational understanding while increasing its own. This situational understanding makes U.S. forces smart and the tempo makes them fast, both cognitively and physically able to maneuver to positions of advantage over an enemy while applying immense lethal capabilities. Direct and indirect fires, both precision and area munitions, enable the U.S. to quickly dislocate, destroy, and defeat its enemies. Of course all this is enabled by mounted, dismounted, and air reconnaissance forces that can shape the battle and transition enemy formations to the main bodies of U.S. strength to be engaged. Maneuver elements then quickly move towards enemy flanks and rear areas leapfroging forward to find positions of advantage over the next echelon of enemy forces.

Given the lethality of the modern battlefield, whether that is RPG 32s in Yemen or TOWIIBs in Aleppo, the world’s armies are getting heavier and not lighter. The Israelis continue to transform older tanks into infantry carriers to provide them freedom of movement in the urban confines of the Gaza strip. The Marine spearheads in Fallujah were led by Army Combined Arms Battalions from the 1st Cavalry Division made up of Bradley Infantry Fighting Vehicles and M1 Tanks. In response to a resurgent Russia, the Germans began to reactivate 100 Leopard 2 Main Battle Tanks (MBTs) in April of 2015 and the Poles ordered over a hundred upgraded Leopard 2 tanks in January of this year.

The role of the tank as the decisive measure of ground combat power has not changed as demonstrated by the re-arming of our Allies in reaction to the threat posed by large armored formations operating in proximity to their borders. The MBT provides its owner a series of options that no other system does. The tank can provide shock effect at great speed and lethality in the attack. It can survive in the most contested environments and it can hold ground, whether that is a ridge line or an intersection. The tank is psychologically imposing and physically dominant and unlike the airplane it can occupy terrain for long periods. Its destructive power is significant with its large caliber, high velocity cannon. In a similar vein, the U.S. Army has recently made a decision to up-gun some Strykers with a 30mm cannon to provide those infantry carriers with a weapon system that has the reach and the exploding ammunition to engage vehicle killing systems at ranges that matter.

GETTING INTO THE GREASY GRASS AND WINNING

If the U.S. deploys forces anywhere in the world, it must deploy a force that will prevail. Getting an Infantry Brigade Combat Team (IBCT) to Latvia to oppose Russian armor is brave but suicidal, no matter what air power is deployed with them. Close combat between brigades on foot against those in modern tanks and infantry fighting vehicles in a theater with contested airspace will cost American soldiers their lives. Clearly, Stryker BCTs challenging enemy armored formations will suffer more than Armored BCTs composed of Bradleys and M1 tanks supported by all arms. The U.S. has the capability to deploy forces very quickly—in a matter of hours and days. Those forces are airborne and light infantry units. They are the best and most capable of their kind in the world. But those light infantry forces do not possess the same fighting capability against tank and mechanized threats that a U.S. armored brigade combat team does.

The U.S. must choose the forces that best match the requirements of the mission and take into consideration the enemy, the troops available, the terrain in which those forces will operate, and the time available to conduct the mission. Clearly, when faced with an enemy that possesses tank and mechanized forces, the choice will normally be tank and mechanized combined arms teams that can overmatch that enemy. Now, it is true that the strategic mobility of armored forces requires sealift, with all the time required to deploy it from the continental U.S. This time can be mitigated by prepositioning equipment both ashore and afloat in areas of potential conflict, but the deployment and assembly of an armored force will take weeks rather than days. The requirement that planners have is to assemble the right force for the job, not the one that gets there easiest. Dropping light infantry outside Riga and in the way of a Russian armored attack might sound heroic but such a force would, in the end, be left without the equivalent of Captain Keogh’s horse Comanche to stuff and admire in some future museum.

This article originally appeared in the Strategy Bridge