Hedging against Failure: Time to Play the Iranian Opposition Card 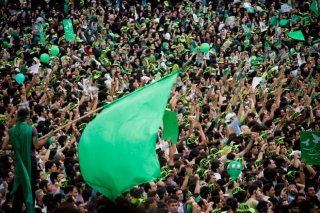 American nuclear negotiators believe they have achieved a breakthrough with their Iranian counterparts; some analysts agree, while others see many red flags and warn against an overly optimistic rush to celebration. It is too soon to determine whether this ultimately will have been a true turning point, but what is certain is that movement appears possible in U.S. – Iranian relations, for the first time in a long time.

Will a nuclear deal actually be signed, and will the resultant agreement ultimately be seen as an example of Iran outwitting and outmaneuvering the West, obtaining sanctions relief while still pressing forward with its nuclear ambitions?

Or will a slender beginning of cooperation and compromise grow into something more enduring? The outcome is not a foregone conclusion; rather, it is interactive, and much will depend on the further specific actions taken by the United States.

Rather than resting prematurely on the laurels of its still-tenuous deal, the U.S. administration must now seek ways to shape and optimize the outcome, regardless of what the possible unstated intentions of the Iranian regime may or may not be.

The key component in obtaining, keeping hold of and further expanding an actual breakthrough, is a hitherto neglected variable, the Iranian opposition. From independent but influential bloggers and intellectuals to a prosperous business elite with a sentimental attachment to the days of the monarchy, from activists with experience in sequential popular mini-uprisings and sustained mass demonstrations to the members of the controversial cadre-organization MeK, the Iranian opposition comprises an unparalleled base of potential civil society engagement. If the opening provided by advancing nuclear talks is to be positive and sustainable, a social and political opening will need to follow, and that in turn will have to achieved and developed by Iranian pro-democracy forces.

With this, a baffling gap in our knowledge about Iran becomes evident.

Over the past decades, experts have mostly focused on trying to puzzle out the convoluted power structures of the Iranian regime—president, Supreme Leader, Pasdaran and so forth—and before and after each election, analyzing the various new leading personalities in order to place them on the hardliner vs. moderate scale.

All the while, the Iranian citizenry has stood up a sustained, determined resistance to the oppressive rule of the clerical regime. Through everything from the low-level mass civil disobedience manifested by the thousands of satellite dishes hidden under laundry lines on rooftops to pull the signals of forbidden television and international news programs into Iranian living rooms, to the dramatic 2009 and 2010 Where is My Vote movement protesting the manipulation of election results, to the journalists languishing in Evin Prison, to the hardcore activists persisting in the face of the jailing, torture and execution of dozens of their comrades, the Iranian public has tried and tried again to rid itself of its theocracy.

In this they have shown impressive courage and persistence, with some of the groups and movements enduring under harsh and seemingly hopeless circumstances since the days of the revolution against the Shah. We have had ample time and opportunity to familiarize ourselves with them, but have remained focused instead on the regime – or, whenever we became particularly frustrated, on military ways to overturn that regime.

Consequently, we now know very little about this potential ace in the deck. What do they, respectively, stand for? How influential are they? What kinds of action can they muster? What sort of help would they need, in order to become a more effective force if a social and political opening indeed occurs?

Time and again, these are questions we fail to ask, or ask too late, or rush to judgment about – and the sequential disasters of the Arab Spring, the “liberation” of Libya (into an ungoverned territory), the “Syrian opposition” (and its heavy component of anti-Western thugs and pro-ISIS extremists) are the direct result of this willful blind spot.

It is a mistake we should not repeat versus Iran. If there is a true opening, it needs to be maximized. If the door appears to be closing again, we need some feet on the ground to hold it open. And this needs to be accomplished judiciously, with sophistication and nuance – not so provocatively as to scare off the regime, but not so timidly as to imply that they can assume a take-it-or-leave it stance, or play us for naïve.

In this emergent opportunity, it makes no sense to ignore one of the most significant added weights that we can throw onto the scales to tip the balance in favor of a positive result. And last not least, if this turns out to have been Islamic Republic smoke and mirrors, we will need an alternative set of counterparts and new options.

Dr. Cheryl Benard is the Director of Metis Analytics, a Washington-based research organization and co-author of Breaking the Stalemate – The Case for Engaging the Iranian Opposition, Zola Books, New York 2015.