Hell Cometh to Earth: Is a U.S.-China War Really Possible? 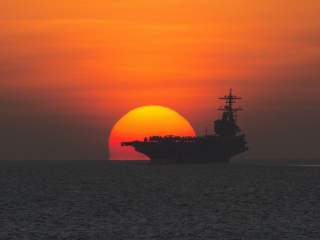 Is a war between the United States and the People’s Republic of China really possible?

On the surface, the idea seems quite silly. Washington and Beijing sport two-way trade equal to over a half a trillion dollars. China holds trillions more in U.S. debt. America educates scores of Chinese students in our public and private universities—over 300,000 young and scholarly minds. Chinese immigrants have become a rich part of American culture. How could such a conflict really occur considering such interwoven connections that span in some instances centuries?

My snap reaction: whoever said war was always the most logical of choices?

Indeed, despite countless areas of mutual interest, relations between Beijing and Washington are clearly on the decline. Some of this is easily explained—both sides during the Cold War feared the Soviet Union more than each other and worked together to contain Moscow. Losing a common enemy was certainly going to create a challenge.

However, with what can only be described as a ring of tensions running from the East China Sea all the way to the very ends of the South China Sea, from allegations of cyber espionage on both sides to comments from high-level military officials that seem more menacing by the day, it seems a clash of some sorts is increasingly possible.

As someone who has been interested in this topic for almost a decade and being an editor/executive editor of not one but two of the world’s best foreign policy publications around, I have been able to work with scholars who have a variety of thoughts on the subject. While I could recommend multiple articles on the subject, the best for sheer readability that has stood the test of time is Robert Farley’s work back in 2014 in this very publication titled Asia’s Greatest Fear: A U.S.-China War. His piece sought to answer the question: “what series of events could lead to war in East Asia, and how would that war play out?”.

Farley, to his credit, does not get bogged down in overly wonky details, but gives the reader a narrative that is easy to follow, seems realistic and does not over sensationalize the topic. He explains that “in this article I concentrate less on the operational and tactical details. . . and more on the strategic objectives of the major combatants before, during, and after the conflict.” Farley also understands the stakes at play, noting that “a war between the United States and China would transform some aspects of the geopolitics of East Asia, but would also leave many crucial factors unchanged. Tragically, a conflict between China and the U.S. might be remembered only as “The First Sino-American War.”

While I of course urge you to read the whole long-form piece, here are some of the highlights.

How Does It Start

Here, Farley makes some very logical assumptions concerning the moves both sides would make and decisions that would need to follow:

“If the history of World War I gives any indication, the PLA will not allow the United States to fully mobilize in order to either launch a first strike, or properly prepare to receive a first blow. At the same time, a “bolt from the blue” strike is unlikely. Instead, a brewing crisis will steadily escalate over a few incidents, finally triggering a set of steps on the part of the US military that indicate to Beijing that Washington is genuinely prepared for war. These steps will include surging carrier groups, shifting deployment to Asia from Europe and the Middle East, and moving fighter squadrons towards the Pacific. At this moment, China will need to decide whether to push forward or back down.”

Assuming China does make a “push forward”, economics will be a big factor in such a conflict:

“On the economic side, Beijing and Washington will both press for sanctions (the US effort will likely involve a multilateral effort), and will freeze each others assets, as well as those of any co-belligerents. This will begin the economic pain for capital and consumers across the Pacific Rim, and the rest of the world. The threat of high intensity combat will also disrupt global shipping patterns, causing potentially severe bottlenecks in industrial production.”

The Goals of Both Sides

Here, Farley demonstrates clearly the possible aims and goals of the United States:

“The PLA will pursue these ends: 1. Achieve the affirmative expeditionary purpose; 2. Destroy as much of the expeditionary capability of the USAF and USN as possible; 3. Hurt America badly enough that future US governments will not contemplate intervention; 4. Disrupt the U.S.-led alliance system in East Asia.”

While Farley does not declare a winner in his article, he does explain to his readers that the “war doesn’t end with a surrender signed on a battleship. Instead, it ends with one participant beaten, embittered, and likely preparing for the next round.” Below, Farley lays out conditions for both an American and Chinese victory:

“The best case scenario for an American victory would be a result akin to the collapse of the Imperial German government at the end of World War I, or the collapse of Leopoldo Galtieri’s military government after the Falklands conflict. Humiliating defeat in war, including the destruction of a significant portion of the PLAN and the PLAAF, as well as severe economic distress, could undermine the grip of the CCP on Chinese governance. This is an extremely iffy prospect, however, and the United States shouldn’t count on victory leading to a new revolution.

“What if China wins? China can claim victory by either forcing the United States into an accommodation to U.S. goals, or by removing the alliance framework that motivates and legitimates U.S. action. The United States cannot continue the war if South Korea, Japan, Taiwan, and the Philippines no longer have an interest in fighting. Either of these require doing significant damage to U.S. military forces and, potentially, to the US economy.”

And here is where things get very interesting:

“The impact of a defeat on U.S. domestic politics would be tough to predict. The United States has “lost” wars in the past, but these defeats have generally involved negotiated settlements of areas not particularly critical to U.S. global interests. It’s not clear how the US people would interpret a major military defeat at the hands of a peer competitor, especially a peer competitor that continues to grow in military and economic power. The President and political party that led the US into war would likely suffer dramatically at the polls, at least after the immediate shock of defeat wore off.”

The Real Danger: “The Window for War”

The greatest reason to fret over a future conflict between Washington and Beijing is the sheer amount of pressure points between them: The East China Sea, Taiwan, The South China Sea, North Korea, cyberattacks and/or cyber espionage that could go very wrong, a space-based military competition, increasing economic competition and so on. With none of these seem ripe for solving anytime soon, as Farley notes “the window for war between the United States and China will, in all likelihood, last for a long time.”

Thankfully there is some room for optimism. Clearly no one in either capital wants to see what would very likely end up being a war that would be global in nature. However, looking into the abyss every now and then sometimes provides the clarity needed for dialogue and hard-won compromise. Let’s hope U.S. and Chinese leaders are taking the long view of what could be many years of tense relations to come--coming to the realization that there would be no real “winners” in such a contest.

Harry Kazianis (@grecianformula) is a non-resident Senior Fellow for Defense Policy at the Center for the National Interest, a non-resident Senior Fellow at the China Policy Institute as well as a fellow for National Security affairs at the Potomac Foundation.  He is the former Executive Editor of The National Interest and former Editor-In-Chief of The Diplomat. The views expressed are his own.