Here Is How Israel's Military Dominates the Battlefield 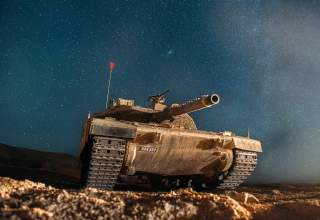 “God is not on the side of the big battalions,” the French philosopher Voltaire famously said, “but on the side of those who shoot best.” Today, the people of Israel take Voltaire’s idea that a covenant with God is maintained through military virtue seriously. They are surrounded by hostile states with significant military power, and their survival depends on their ability to counter military quantity with quality. In The Weapon Wizards: How Israel Became a High-Tech Military Superpower, Israeli journalists and Israeli Defense Forces (IDF) reservists Yaakov Katz and Amir Bohbot argue that the key to Israel’s success has been its innovative weapons programs, founded in advanced technology.

The Weapon Wizards is a journalistic history of Israeli military innovation. The story is riveting and employs new sources—including interviews with Israeli weapons designers—to explain the motivation behind Israel’s major weapons programs. It is divided into case studies on drones, the reactive armor of the Merkava tank, reconnaissance satellites, what they call the Iron Dome “missile defense” system (which actually only defends against rockets and artillery, not missiles), targeted killings and cyber weapons. Another chapter explains how Israeli arms sales fund innovation. Conspicuously absent from the study are accounts of failed weapons programs, or Israel’s nuclear program, which provides Israel with its ultimate qualitative edge.

Throughout their history, Katz and Bohbot wonder “why” Israel produces so many advanced arms. They provide several complementary explanations.

Strategically, Israelis believe they must “innovate or disappear.” Israel has always sought advanced weapons, even before it developed the capacity to produce them indigenously in the late 1960s. In 1953, Israel promulgated a “Doctrine of Defense,” still in force today, stating it would maintain a “very strong” Qualitative Military Edge (QME) relative to its neighboring states. Since then Israel has continuously faced innovative enemies, from Arab states armed with advanced Soviet weaponry to the hybrid threat Hezbollah. It has had numerous opportunities to sharpen its Edge in combat, and a strategic imperative to do so.

Economically, Israel spends 4.5 percent of GDP on research and development, and 30 percent of all R&D “on products of a military nature.” The country also benefits from $6.5 billion of arms exports and $6 billion of cyber exports annually, whose profits fund further innovation. The United States also provides billions of dollars of military aid to Israel, including extensive transfers of advanced military technology. The Merkava tank program, for example, was funded by the United States, although U.S. military aid is barely mentioned.

Institutionally and societally, the Katz and Bohbot believe Israel has cultural advantages which enable innovation. The authors suggest at various times that Israelis have high risk tolerance, high levels of education and an inherent propensity to innovate. The Israel Defense Forces (IDF) are described as “brash,” “undisciplined,” young, and benefiting from an “absence of hierarchy.” Is it also highly educated. Thanks to Israeli conscription, most Israeli weapons designers are combat veterans, and they have strong links to those who will employ their products in combat.

What fails to emerge from this account is a coherent theoretical explanation of Israeli military innovation. Indeed, Katz and Bohbot present numerous contradictory quotations from Israeli leaders and weapons designers about “Jewish genius.” In different case studies we are told Israelis possess “Jewish genius” due to a unique “Jewish genome” but also that, contradictorily, Israelis “don’t have different genes than [Western] people.” Moreover, the IDF as Katz and Bohbot describe it is a Silicon Valley trope: a flat organization, run by young and highly-educated people, with ample resources, who generate revolutionary innovation and immense returns. Whether flat, young, affluent organizations actually produce the most effective weapons is not addressed.

Like many other Israeli soldiers, Katz and Bohbot are eager to minimize the importance of foreign support to the IDF. Given the immense role of American sponsorship of Israel’s defense industry, their failure to account for American aid renders this book almost valueless as a stand-alone account. In the aftermath of the 1973 Yom Kippur War, in which Israel was nearly annihilated by Arab states using Soviet arms, the United States tacitly adopted a policy of guaranteeing Israel’s QME. In 2008, this policy was codified in U.S. law. The billions of dollars of American military aid which funded every major Israeli weapons program in this book receive only passing references, however.

In an even more bizarre nationalistic pipe dream, the authors wrongly suggest that Israel has primarily been a source of military technology transfer to the United States. In the most egregious example of this, they repeatedly claim Israel “invented” drones. This is preposterous hyperbole. The United States deployed military drones extensively during the Vietnam War while Israel was literally flying toy model airplanes on reconnaissance missions in the Sinai. Today, Israel does lead the global drone market: its exports make up 60 percent of the global market, and America’s only 23.9 percent. But that is primarily because Israel has successfully pursued a comparative advantage in short-endurance tactical drone production since the 1970s. Since the cancellation of the Lavi fighter program in 1987, it has exclusively relied on American designs for manned combat aircraft, while focusing its resources (many of which are provided by the United States) on drones.

Most fundamentally, Katz and Bohbot fail to give full credit to Israel’s multi-faceted Qualitative Military Edge. As Eliot Cohen, Michael Eisenstadt and Andrew Bacevich put it in 1998:

The IDF has traditionally relied less on technical inventions to secure victory than on the fighter’s tactical proficiency and spirit of self-sacrifice, and this core belief sets one of a number of limits on the importance assigned to technological chance… For Israeli military thinkers, the answer to their enemies’ quantitative superiority is quality—a comprehensive quality that rests only partly on technology, and much more on fighting spirit, tactical skill and social cohesion.

Until the 1970s, Israeli armaments were comparable to those of Israel’s Soviet-armed Arab opponents. Moreover, the Israeli approach to military change has always been incremental. IDF innovation has never been driven by an overarching doctrine like the “Military-Technical Revolution” or the “Third Offset.”

In the end, The Weapon Wizards raises more questions than it answers: Did Israel seek military overmatch primarily through innovation and high-tech weapons? Perhaps, but we don’t learn enough about the total Qualitative Military Edge concept to say, and the presentation of Israeli innovation as a necessity rather than a strategic choice confuses the issue. Has the strategy of innovation achieved Israel’s strategic objectives? And as the authors wonder, what are the sources of Israel’s prima facie remarkably level of military innovation? They come close to answering this last question, but utterly fail by ignoring the key role of American aid.

T.S. Allen is an officer in the United States Army. Follow him on Twitter @TS_Allen. The views presented here are those of the writer and do not necessarily represent the views of the U.S. Department of Defense and its components.