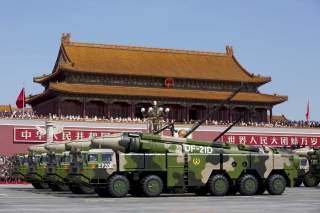 North Korea’s reckless missile test over Japan this week once again highlighted the growing danger Pyongyang poses to the United States and its allies in the region. Yet, as the National Interest’s Harry Kazianis and I argued back in July, “Pyongyang’s missiles should not distract us from the fact that the greatest long-term challenge to America in Asia comes from China’s determination to dominate that vital part of the globe.”

Furthermore, we pointed out, the United States can use the North Korean threat to deploy military capabilities that would also be effective against China. This would not only put Washington in a better position to deal with China, but would also be the best means of forcing Beijing to rein in its erstwhile ally, North Korea.

The most recent North Korean test presents a perfect opportunity to begin to implement such a policy. Specifically, the United States should strengthen its ballistic missile defense systems around U.S. military bases in Japan. This is absolutely necessary for dealing with the North Korean threat. During the Korean War, American forces deployed in Japan were crucial in quickly coming to the aid of the South Koreans. Although the United States now has a permanent military presence in South Korea, its forces in Japan would be instrumental in any conflict on the Korean Peninsula. Kim Jong-un know this, and is therefore certain to try to knock these bases out in the beginning stages of a war.

He is not alone in this regard. As I previously highlighted, a June report from the Center for a New American Security (CNAS) persuasively argued that “the greatest military threat to U.S. vital interests in Asia may be one that has received somewhat less attention: the growing capability of China’s missile forces to threaten U.S. bases in the region.” The report, which was authored by Thomas Shugart and Javier Gonzalez, notes that China could use precision-guided conventional missiles to preemptively strike U.S. bases in the region in order to prevent America from intervening in a conflict over Taiwan or the Senkaku Islands. Shugart and Gonzalez also conduct a simulation of Chinese saturation strikes on U.S. bases in Japan and find Beijing could effectively cripple American forces in that country.

America’s Japanese bases are so vulnerable to these attacks because they lack sufficient missile defense systems. To be sure, Japan has extensive, layered missile defense capabilities, including about seven Patriot/PAC-3 ground-based launchers and four destroyers equipped with Aegis ballistic missile defense (BMD) systems. Tokyo is also now seriously considering complementing these systems with an Aegis Ashore system. But, as Shugar and Gonzalez note, these systems are primarily used to defend Japanese cities and population centers (although in a drill this week Japan did temporarily deploy these PAC-3 systems to U.S. bases).

The United States also has its own missile defense capabilities in Japan, including four Patriot PAC-3 systems, two TPY-2 radars and seven Aegis BMD-equipped vessels that are home stationed in Japan. Still, this is hardly sufficient. The TPY-2 radars don’t have interceptors, and the Aegis-vessels have responsibilities all over the Pacific theatre. It is long past time that the United States better protect its military bases in Asia with stronger missile defense systems. Although Tokyo has decided against purchasing the Terminal High Altitude Area Defense (THAAD) system, the United States should still deploy THAAD systems to protect its own bases from North Korean and Chinese missile strikes. It could also consider Aegis Ashore systems, additional Patriot PAC-3 and specific Aegis BMD vessels dedicated to protecting U.S. bases.

Shugar and Gonzalez recommend two dedicated BMD vessels armed with SM-3 Block IIA interceptor missiles, seven THAAD systems (five new ones and converting the two existing TPY-2 radars into full THAAD batteries), and deploying new Patriot-PAC-3 missile batteries to protect U.S. bases at Sasebo and Iwakuni. This would be enough to protect these bases against North Korea for the foreseeable future. Although Chinese extensive missile arsenal could probably overwhelm these systems, it would give most U.S. aircraft and ships enough time to get off the ground or out of port, which would limit the effectiveness of Beijing’s attack.

As noted above, besides being prudent from a military standpoint, this policy is also the best way to force China to increase its pressure on North Korea. This is evident from Beijing’s reaction to the decision to deploy a THAAD battery in South Korea. Following North Korea’s second intercontinental ballistic missile (ICBM) in July, Beijing spoke out more strongly against South Korea’s decision to allow additional THAAD launchers than it did about Pyongyang’s actual test. Notably, the THAAD interceptors in South Korea don’t even threaten Beijing; it is the TPY-2 radar system that concerns China. If the United States responds to North Korea’s missiles by deploying systems that can help defend against China’s own forces, it will make Pyongyang Beijing’s problem. And China always acts to defend its national interests.