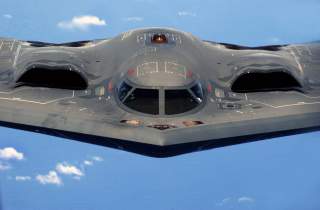 The Trump administration will be making a decision on how to respond to an alleged chemical weapons attack in the Syria town of Douma within the next forty-eight hours.

President Donald Trump said that the United States is currently examining the evidence and that military force remains an option. Trump promised a response even if his administration decides that Russia is responsible.

Asked if Russia bears responsibility for the alleged chemical attack, Trump said that the Kremlin might be culpable. “He [Russian President Vladimir Putin] may. Yeah, he may. And if he does, it’s going to be very tough. Very tough,” Trump said during a meeting of his cabinet on April 9. “Everybody is going to pay a price. He will. Everybody will.”

Trump said it will take roughly twenty-four hours for the United States to determine which party was responsible for the alleged chemical attack. “If it’s Russia, if it’s Syria, if it’s Iran, if it’s all of them together, we’ll figure it out and we’ll know the answers quite soon,” Trump said. “So we’re looking at that very, very strongly and very seriously.”

Trump noted that both the Russians and Syrians deny that there was such an attack. “They’re saying they’re not,” Trump said. “But to me, there’s not much of a doubt, but the generals will figure it out probably over the next 24 hours.”

Further, asked directly if military force is on the table as an option, Trump said that all options are on the table. “Nothing is off the table,” Trump said.

Who is to Blame?

Trump’s comments slightly softened his earlier tweets on April 8 where he directly blamed Russia, Syria and Iran for the alleged chemical attack. “Many dead, including women and children, in mindless CHEMICAL attack in Syria. Area of atrocity is in lockdown and encircled by Syrian Army, making it completely inaccessible to outside world,” Trump had tweeted. “President Putin, Russia and Iran are responsible for backing Animal Assad. Big price... ....to pay. Open area immediately for medical help and verification. Another humanitarian disaster for no reason whatsoever. SICK!”

Trump further asserted that had President Barack Obama launched a campaign against the Syrian regime in August 2012—when Damascus launched an earlier chemical attack against Syrian rebels—the current situation in Syria would have been averted. “If President Obama had crossed his stated Red Line In The Sand, the Syrian disaster would have ended long ago! Animal Assad would have been history!” Trump tweeted.

Right now it is unclear exactly who was responsible for the chemical attack in Douma, if, indeed, there was one. The Syrian American Medical Society (SAMS) claimed that Douma came under what appears to have to been a chemical weapons attack on Saturday, April 7, at 19:45 local time. “More than 500 cases -the majority of whom are women and children- were brought to local medical centers with symptoms indicative of exposure to a chemical agent,” SAMS said. “Patients have shown signs of respiratory distress, central cyanosis, excessive oral foaming, corneal burns, and the emission of chlorine-like odor.”

SAMS does not suggest which party was responsible for the attack. Instead, the organization has called for an investigation—and for an international intervention. “SAMS and the Syrian Civil Defense demand an immediate cease-fire in the city of Douma and the entry of international investigation teams from the Organization for the Prohibition of Chemical Weapons (OPCW) to investigate this heinous chemical attack,” SAMS said. “SAMS, along with the Syrian Civil Defense call for the immediate intervention of the international community to enforce international law prohibiting the use of chemical weapons, and to ensure the protection of medical and humanitarian facilities to enable them to continue their lifesaving work.”

However, there has been no independent verification of the SAMS report—though the U.S. State Department believes the report is credible. The Kremlin, for one, rejects the very notion that there was a chemical attack on Douma. Moscow’s foreign minister, Sergei Lavrov, said that Russian forces, together with the Red Crescent organization, had found no evidence of a chemical attack. “Our military specialists have visited this place, along with representatives of the Syrian Red Crescent... and they did not find any trace of chlorine or any other chemical substance used against civilians," Lavrov said.

The Russians are asserting that evidence is being manufactured to essentially frame the Syrian government for the chemical attack. “False information is being planted about the alleged use of chlorine and other toxic agents by the Syrian government forces,” the Russian Foreign Ministry said in a statement. “The latest fake news about a chemical attack on Douma was reported yesterday. These reports are again referenced to the notorious White Helmets, which have been proved more than once to be working hand in glove with the terrorists, as well as to other pseudo-humanitarian organisations headquartered in the UK and the US.”

Indeed, the Russians are asserting that the alleged use of chemical weapons is a provocation by “those who are not interested in the early elimination of one of the last seats of terrorism in Syria and in a genuine political settlement” to undermine the Assad regime. “We recently warned of the possibility of such dangerous provocations,” the Russian Foreign Ministry said. “The goal of these absolutely unsubstantiated lies is to protect the terrorists and the irreconcilable radical opposition that has rejected a political settlement, as well as to justify the possible use of force by external actors.”

Hawkish voices in the United States—including Republican Sens. Lindsey Graham, John McCain and Susan Collins—are already calling for a military intervention in Syria. Those are just a few among the voices calling on Trump to set aside his stated desire for American forces to leave that war-torn nation once the ISIS terrorist group has been eliminated. Indeed, Trump said that he is reconsidering his position and will make a decision shortly. “We’re going to make a decision on all of that, in particular Syria,” Trump said. “We’ll be making that decision very quickly, probably by the end of today. But we cannot allow atrocities like that. Cannot allow it.”

But what military options exist for Washington in Syria? “I don't rule out anything right now," U.S. Defense Secretary James Mattis said at the Pentagon. "The first thing we have to look at is why are chemical weapons still being used at all when Russia was the framework guarantor of removing all chemical weapons, and so working with our allies and partners from NATO to Qatar and elsewhere we are going to address this issue."

The basic problem for the United States is that there are multiple nations’ forces operating in close proximity to each other in the chaos and confusion of Syria—including Russian forces. That means that unless Washington is willing to risk a major war with Moscow—one that could escalate out of control—American military personnel will have to be very careful not to hit uniformed Russian forces.

Moscow has reiterated that Russia will retaliate if their forces are struck. “We have to say once again that military interference in Syria, where Russian forces have been deployed at the request of the legitimate government, under contrived and false pretexts is absolutely unacceptable and can lead to very grave consequences,” the Russian Foreign Ministry said.

The Foreign Ministry statement reinforces a recent declaration by the Chief of the General Staff Gen. Valery Gerasimov. “If lives of the Russian officers are threatened, the Armed Forces of the Russian Federation will retaliate against missile and launch systems,” Gerasimov said on March 13.

Gerasimov, as both American and Russian-based experts have noted, is not prone to bluffing and strictly follows directives from Putin. “When the Russian chief of the general staff says something, you have to listen because someone told him to say it,” Center for Naval Analyses senior research scientist Michael Kofman said recently at the Center for the National Interest.

Mattis did not directly answer reporters’ questions on how the United States could hit Syrian chemical weapons depots, but the bottom line for Washington is that it would have to be exceedingly careful to avoid hitting Russian forces. However, in order to prevent the Russians from tipping off their Syrian allies, the United States might have to refrain from using the deconfliction line that is used to ensure the two great powers do not come into unintentional military conflict.

“I’m very sure that great care would be taken to strike appropriate targets. There are a number of capabilities that could be used to strike with precision, including cruise missiles that can be air-launched and sea-launched, and possibly penetrating combat aircraft,” Mark Gunzinger, a former U.S. Air Force B-52 pilot and airpower analyst at the Center for Strategic and Budgetary Analysis, told the National Interest. “In addition to target proximity to sensitive areas, the exact platform and weapons mix used for a strike (or strikes) would depend on factors such as the nature of the targets, their ‘hardness,’ mobility, etc.”