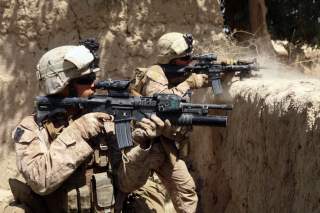 The Pentagon is actively working to reduce the number of non-deployable troops on its rolls so that the burden of combat is shared more evenly amongst the force.

“The Undersecretary of Defense for Personnel and Readiness about a week ago came out, having defined the problem that initially was brought to his attention by the U.S. Army, where they had many nondeployables on their rolls,” U.S. Defense Secretary Jim Mattis told reporters.

“You may say, what's this? People who've been injured and not returned to duty. People who have—and I'm not talking about combat injured now. That's a separate category. But people who are, just for one reason or another, are not able to deploy with their units. It was a significant number, and the Army brought their concerns forward. The other services also highlighted the concerns.”

Because those non-deployable troops are essentially a drain on the force, the Pentagon has issued guidance that states that service personnel can only be on a non-deployable status for one-year. “They've come out with a policy that if you're not deployable for a year or more, you're going to have to go somewhere else,” Mattis said.

Mattis explained the basic premise and reasoning behind the Pentagon’s decision. “Let me explain what happens,” Mattis said. “If you have 100,000 troops—let's just pick a number, just for the sake of giving you mental model of this—if 10,000 of them are not deployable, then 90,000 deploy more often, obviously to meet the same deployment standard. So that's unfair.”

Mattis explained that the strain on those troops who are deploying—and their families—is real. “I had a lady here a couple of months ago tell me her husband was on—who is preparing—no, is on his sixth deployment, completing his fifth, and is now on his sixth combat deployment,” Mattis said. “This lady had been married to the soldier for 11 years, OK. When that sort of thing happens, that brings sharply into focus that some people are carrying more than the share of the load that I want them to carry.”

Deployments—as is often forgotten—place a huge burden on military families. “They [troops] need time at home,” Mattis said. “They need time with their families. We may enlist soldiers, we re-enlist families. OK, that's the way it is. If you can't keep the family together, then you're either going to lose the family or you're going to lose the soldiers, and that's a net loss for our society and for our military; that we put a lot of training into people nowadays. So that policy is now out.”

Current policies might be enough to address the problem, but it will require strict enforcement—but Mattis said that some tweaking might be needed. “Generally speaking it seems to me, as I reviewed the service policies, the policies were already strong enough, so some of this may simply be more adherence to the current policy that we have; some of it may require an effort within the DOD, the Office of Secretary of Defense policy, that we put out for the department now,” Mattis said.

Mattis goal is clear: Every member of the military will have to carry a share of the burden. “But the bottom line is, we expect everyone to carry their share of the load, and you know, sometimes things happen, people bust their legs in training or they're in a car accident, we understand that, and if they—sometimes that even takes a months of recovery,” Mattis said. “We understand that. But this is a deployable military. It's a lethal military that aligns with our allies and partners.”

The bottom line is that the Pentagon needs all of its service members to be able to deploy. “If you can't go overseas in your combat load—carry a combat load, then obviously someone else has got to go,” Mattis said. “I want this spread fairly and equitably across the force.”