Here Is the U.S. Army's New Plan to Kill Chinese and Russian Ships 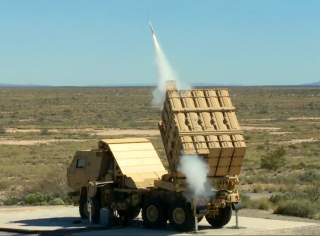 “Partnering with the Army, SCO is incorporating an existing seeker (into ATACMS) that will enable our ground forces to threaten mobile targets on land and sea,” Dr. William B. Roper, Jr. Director, Strategic Capabilities Office, told the Senate Appropriations Subcommittee on Defense earlier this year.

Cross-domain warfare is an area of increased strategic focus for the Pentagon’s SCO (Strategic Capabilities Office), an entity specifically stood up for the purpose of connecting promising emerging technologies with existing weapons platforms.

The conceptual foundation of cross-domain fires is to not only recognize fast-progressing newer warfare domains such as space, cyber and electronic warfare -- but to also adjust to the growing extent to which air, land and sea platforms need to interoperate in a high-threat modern combat environment. For instance, fighter jets and drones need an ability to transmit target information or ISR data to surface ships, land combat mission stations or even space-based assets.

One of the key elements of this strategy involves an Army effort to think of traditionally land-based weapons such as artillery, rockets or missile systems as a joint combat asset able to use mobility, range and sensor technology to, for example, destroy moving targets such as enemy air assets or ships at sea.

The Army’s ATACMS falls clearly within the scope of these strategic concepts and could potentially be closely aligned with cross-domain warfare tactics. It is a 13-foot, 3,600-pound surface-to-surface missile first fired during Operation Desert Storm in the early 1990s; ATACMS is a Lockheed-developed weapon able to hit targets as far as 100 miles away.  Using GPS/INS guidance technology, ATACMS can explode a unitary blast fragmentation warhead.

“Partnering with the Army, SCO is incorporating an existing seeker (into ATACMS) that will enable our ground forces to threaten mobile targets on land and sea,” Dr. William B. Roper, Jr. Director, Strategic Capabilities Office, told the Senate Appropriations Subcommittee on Defense earlier this year.

Army weapons developers did not wish to elaborate upon the technical specifics of the ATACMS seeker they are working on with SCO, likely for security reasons. However, the service has talked about ongoing work with Lockheed to engineer a proximity sensor for the weapon such that it can detonate above or near intended targets without needing to make contact or detonate on impact.

Also, Army officials did describe some of the key advantages their work on ATACMS with SCO will bring to the joint warfighting enterprise.

“Deploying this upgrade on an operational system like ATACMS will enable the Army to use existing force structures for rapid development and fielding, while providing a near-term capability to service moving land and maritime targets,” Dan O’Boyle, spokesman for the Army’s Program Executive Office Missile and Space, told Scout Warrior.

SCO’s multi-domain weapons integration and testing approach is as part of a broader effort to more quickly bring enhanced combat capability to the force more quickly than longer-term developmental programs.

Other fast-developing SCO projects include releasing small drones from the flare dispenser on an F-16, firing the Navy’s rail-gun Hypervelocity Projectile from an Army Howitzer and exploring ways of configuring an existing large air platform to function as a high-tech arsenal plane.