This Was Russia's Secret Plan to Kill America's Sub-Killers 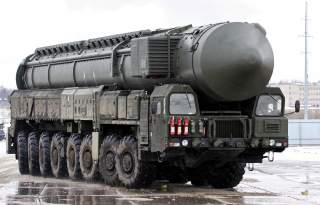 Had the Cold War turned hot, the Soviet Union would have unleashed its enormous fleet of submarines to devastate Western merchant shipping and troop convoys.

But for every offense, there is a defense. The Western powers, particularly the United States and Britain, made an enormous investment in antisubmarine (ASW) ships, planes, weapons and sensors. Patrols and sensors guarded choke points that Soviets subs would have to traverse, such as the GIUK (Greenland-Iceland-UK) gap. Even the ocean floor itself was wired to detect the sound of Soviet submarine propellers.

Alas, for every defense, there is an offense. Had war erupted, the Soviets would have attempted to protect their subs by aggressively killing Western sub-killers—including the use of nuclear missiles.

The strategy is sketched out in a 1975 article in the secret Soviet professional military journal "Military Thought," obtained by the CIA in the 1980s and recently declassified by the American spy agency.

"At the beginning of a war it is advisable to initiate aggressive and decisive actions to destroy within a short time ASW forces and means in the theaters, thereby bringing about favorable conditions for the deployment and combat actions of our submarines," wrote vice-admiral Vladimir Samoylov, who served as First Deputy Commander of the Black Sea Fleet and later commander of the Leningrad naval base.

Samoylov's article clearly reflects Soviet worries over the extent and sophistication of Western ASW. His article credited NATO with possessing more than 200 submarines, 700 surface ships and 2,000 aircraft and helicopters to hunt submarines in the West, and 400 ships and 500 aircraft in the Pacific. These forces secured choke points such as the GIUK Gap and Gibraltar, and also stalked Soviet subs near Soviet bases.

"The qualitative diversity of the forces and means being introduced into the enemy's ASW system and the spatial distribution of them throughout entire theaters create great difficulties in neutralizing and destroying this system, and the accomplishment of this task requires the involvement of multiple-arm naval forces and other branches of the armed forces, which must operate according to a unified concept and plan under centralized control," wrote Samoylov.

How would Western sub-hunters be destroyed? Essentially by clobbering them with every weapon in the Soviet arsenal. "Specially established groupings of submarines, surface ships, and naval missile-carrying and ASW aviation, as well as large units of long-range aviation, can be assigned to accomplish tasks in the operation," Samoylov wrote. "In addition, shore-based missile units and, in certain cases, also light naval forces, missile units, and the Air Defense Forces of the Country in coastal and enclosed sea theaters might be assigned. Under conditions wherein nuclear weapons are used according to the decision of the Supreme High Command, the Strategic Rocket Forces as well can be assigned to participate in the operation."

Samoylov's article also offers a fascinating glimpse into how the Soviets viewed their enemies. For example, the Soviets placed particular emphasis on finding fixed sensors such as the SOSUS (Sound Surveillance System) chain of underwater hydrophones, which they saw as a key to Western defenses. "Underwater sonar systems and cable lines can be destroyed with the aid of underwater explosions by depth charges, torpedoes with nuclear charges, and also by remote-controlled mines laid out in advance in the identified areas where stationary underwater surveillance means are located," according to Samoylov.

Interestingly, in light of Soviet expertise—as well as Russia today—in deception operations, Samoylov spoke not just of deceiving the West as to Soviet movements, but also setting traps: there would be "diversion of enemy ASW forces to fake axes, there it would be possible to effectively destroy them at the beginning of a war."

Would the Soviet plan have worked? It would have been an extremely complex effort involving numerous units and weapons spread across the Soviet navy, air force, army and nuclear rocket forces, operating across a vast domain. Even Samoylov acknowledged that the plan would require hitting in the proper sequence, and coordinating the array of ships, planes, subs, missile and electronic warfare assets.

And all this in the midst of the devastation and confusion of a nuclear war. Samoylov seems to have assumed that nuclear weapons would be an integral part of an East-West conflict, which indeed was part of Soviet planning.

And what of today? Russia's submarine force is but a shadow of its former self in quantity, if not quality. On the other hand, the enormous Western ASW apparatus has also faded. There aren't thousands of ships and planes to hunt subs, nor do U.S. carriers fly special ASW aircraft like the S-3 Viking.

The hotspot of the undersea war has also migrated from the Atlantic to the Pacific, and from the GIUK gap to the South China Sea. China's seventy-strong—and growing—submarine fleet is but a fraction of the Soviet sub armada. But it would only be logical for Chinese aircraft and missiles to target U.S. and allied ASW forces to protect Chinese subs.