Here Is What You Need to Know about the U.S. Navy's Newest Ship 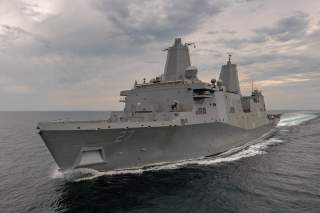 “I am amazed with the shipbuilders here at Ingalls,” Capt. J.R. Hill, Portland’s prospective commanding officer, said. “There are thousands of them who have been working to build this ship and put it into service, and they’ve really done a great job. I’m very impressed with the team Ingalls has put together as well as the 370 crew members present today who are ecstatic about taking control of this ship. We look forward to what she can do in the future.”

The shipyard workers—who have often spent their lives building these massive vessels—were pleased at having completed the delivery of another ship.

“Today is a great day for this collective industry and customer team,” Kari Wilkinson, Ingalls’ vice-president for program management, said. “For many of the shipbuilders, Supervisor of Shipbuilding representatives and members of the Navy program office, this is the eleventh ship they have built and delivered together. Their personal commitment to excellence has become the hallmark of the LPD program, and we are positioned to continue that tradition on future ships.”

With Portland formally delivered to the U.S. Navy, HII can focus on completing Fort Lauderdale (LPD 28), which is the twelfth San Antonio-class ship being built for the service. Meanwhile, the navy will soon award the shipyard—located in Pascagoula, Mississippi—a contract to build LDP-29. HII has already been awarded an advanced procurement contract in June to start work on the long lead items for that next vessel.

The U.S. Navy had originally planned to buy twelve San Antonio-class ships, the early iterations of which were plagued with technical problems due to manufacturing issues. Moreover, the navy initially could only fund eleven such vessels due to their enormous cost, which rose from a projected $890 million to about $1.6 billion. But as the San Antonio-class started to prove its worth, the navy added the twelfth ship back into the budget in 2015 as bridge to the future LX(R).

The U.S. Navy eventually decided that that modified San Antonio design would fill its LX(R) requirements to replace the Harpers Ferry- and Whidbey Island-classes of dock landing ships. The navy is expected to start funding of the first LX(R) ship—LPD-29—in 2020. Two more will be built in 2022 and 2024 with additional ships being built later. Though LPD-29 will still be a San Antonio-class vessel, the ship will significantly different from her predecessors.