Here Is Where Trump and Kim Jong-un Should Really Meet 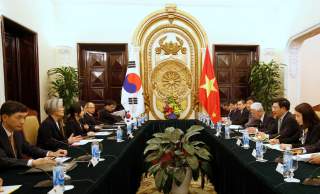 On 8 March 2018, the United States government announced that US President Donald Trump had agreed to meet with North Korean leader Kim Jong-un at a place and time to be determined. The media seem to agree that there are two possible places in which this surprising event could take place: the Korean Demilitarized Zone or Beijing.

The location of the meeting is highly symbolic and could therefore be a valuable strategic move for both parties. Hanoi is an ideal choice, satisfying three criteria that are important to a successful outcome: it demonstrates serious interest in making fundamental improvements to US–North Korea relations, it sends a powerful symbolic message to the world community in a place where the Vietnam and the United States have reconciled past grievances, and it points to the preparatory steps that North Korea needs to make to join the world community.

By choosing Hanoi as the meeting’s venue, both parties would demonstrate that they are serious about making fundamental changes in their policy toward one another. Hanoi as a city reflects how, in only one generation, diplomatic relations can be transformed from hostile to collaborative and mutually supportive. During the Vietnam–American war, and even before the launch of the 1986 economic reforms, Hanoi was a centre of resentment and suspicion against the United States. By contrast, Americans now enjoy a welcoming environment in Hanoi, which has become a buzzing hub of economic exchange, tourism, and cultural interaction.

The lifting of the US trade embargo in 1994 and the normalisation of relations with the United States in 1995 have had a transformative effect on Vietnam’s economy and development. Vietnam is now one of the fastest growing countries in the world, having emerged from a position of isolation and impoverishment in the 1980s to become an open and vibrant economy. Vietnam’s exports increased more 200 times between 1986 and 2016. They reached US$213 billion in 2017, 80 per cent of which are manufactured goods and a significant proportion destined for the US market. Furthermore, Vietnam has far surpassed many large economies in the region, including Indonesia and the Philippines, on the total value of manufactured exports.

Both Vietnam and the United States consider their partnership strategic and have made vigorous efforts to deepen it. The historic visit of the US aircraft carrier USS Carl Vinson to Da Nang in March 2018 is a remarkable example of that commitment. During the war, US aircraft carriers travelled to Vietnam to support bombing missions. Today, their visit is a welcome symbol of friendship.

By holding the summit in Hanoi, the United States and North Korea would send a powerful signal to the international community about the approach they intend in improving relations: forward looking, practical and absent external political intervention. Vietnam is a relevant example for North Korea to consider in adopting strategies to normalise relations with the United States and to promote its own economic reforms.

Hanoi is an ideal choice as the United States and North Korea consider the next steps in turning the summit into substantive progress. South Korea, as one of the largest and most committed investors in Vietnam, can showcase its capabilities to enable North Korea to prosper through diplomatic normalisation, economic modernisation and global integration. As of December 2017, South Korea’s total foreign direct investment in Vietnam amounted to US$57.7 billion. Investment from Samsung and LG, which combined exported nearly US$50 billion worth of electronics products made in Vietnam, have enabled the country to achieve rapid export growth and turn its trade balance from deficit to surplus. If North Korea shows a genuine desire for reconciliation, it can be expected that South Korea will be ready to help its neighbour to succeed.

Holding a US–North Korea summit in Hanoi is an opportunity to make history and advance diplomatic goals in a place with a similar history of its own. If it chooses to adopt reforms and pursue trade openness, North Korea could soon become one of the most attractive emerging-economy investment destinations and one of the fastest growing economies in the world. Through its own recent experience, Vietnam can offer North Korean policymakers advice about how to transition from an isolated and command-based economy to a globally integrated and market-driven economy. This change is unlikely to be easy, but now is a rare window of opportunity to re-imagine what an open and prosperous North Korea could look like, and how it can be achieved.

All ideas should be on the table, including a summit hosted by Hanoi.