Here Is Why South Korea May Be Turning to Russia 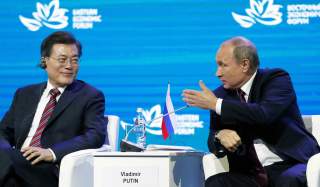 In less than thirty years, previously non-existent diplomatic relations between Russia and South Korea have transformed into a formidable economic partnership. As of 2015, South Korea ranked as Russia’s seventh-largest trading partner for exports and imports.

Prior to the election of current South Korean President Moon Jae-in, Russia–South Korea commodity turnover was US$15 billion. Moon’s administration wants to double that by 2020. He is not alone in that goal — after the 2017 Eastern Economic Forum (an event that Russia holds to encourage investment in the Russian Far East), the Korea Trade-Investment Promotion Corporation vowed to help South Korean firms planning to operate in Russia. As its broader plan, Seoul hopes to establish a major free trade agreement with Russia and members of the Eurasian Economic Union after the Trump administration created uncertainty over the future of the United States–Korea Free Trade Agreement

Russia’s domestic interests in developing the Far East are driving the uptick in trade ties. As far back as the days of the Russian Empire, the Far East has been one of the most underdeveloped regions of Russia. Both Moscow and Seoul recognise the opportunities that the Far East provides for closer cooperation, and the presidents of both countries have vowed to foster development in the region.

Following a visit to Seoul in November 2017, Minister for the Development of the Russian Far East Alexander Galushka asserted that South Korea was interested in participating in the Rason–Khasan railway link project once again. The following month, Song Young-gil, whom Moon appointed to serve as a special presidential envoy to Russia, began pushing for legislative changes that would allow for North Korea–South Korea economic cooperation to include third-party countries like the Russian Federation.

Even prior to the 2017 Forum, the Russian Far East was the epicentre of economic relations with South Korea. According to Yury Trutnev, Russian Presidential Envoy for the Far Eastern Federal District, commodity turnover between the two countries grew 50 per cent during the first half of 2017, and Russian exports to South Korea were up by 40 per cent.

Recent examples of Russian–South Korean economic cooperation at the provincial level include an October 2017 meeting in Seoul between the South Korean government and business representatives as well as senior figures from eight regions in the Russian Far East. At another meeting in January 2018, Song Young-gil and Alexander Galushka discussed the ‘nine bridges’ plan in the context of increasing ties between South Korea and the Russian Far East.

From the Kremlin’s perspective, it is in Russia’s national interest to raise its profile in the Asia Pacific while simultaneously driving economic development — particularly in those regions most geographically distant from Moscow. South Korean investment in Russia’s eastern regions helps to mitigate the possibility of overt economic dependence on a single foreign partner like China. Given the Korean Peninsula’s geographic proximity to the Russian Far East, Seoul perhaps finds it more expedient to focus on developing its presence through projects and partnerships in Russia’s Asia Pacific regions.

Anthony V Rinna is an analyst on Russian foreign policy in East Asia for the Sino-NK research group. He currently resides in South Korea.