Here's Why Russia's 'New' Tu-160M2 Could Be NATO's Worst Nightmare 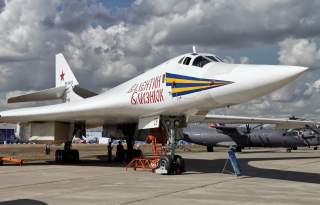 Russia’s fleet of new build Tupolev Tu-160M2 Blackjack strategic bombers will be equipped with upgraded engines that would extend the range of the aircraft by roughly 600 miles. The massive Mach 2.0 capable bombers are also expected to receive a new generation of stealthy long-range cruise missiles as their main armament.

According to Russian deputy defense minister Yuri Borisov, engine manufacturer Kuznetsov is working on the development of a modernized version of the NK-32 afterburning turbofan for the new Tu-160M2 variant.

"In its upgraded version, it [the engine] will be 10% more efficient, which will make it possible to increase the flight range of the strategic bomber by about 1,000 km," Borisov said during his visit to the Kuznetsov plant in Samara according to TASS.

Development of the Tu-160M2 is proceeding on schedule according to Borisov.

“The work is proceeding, by and large, according to schedule so far. As for the engine, this is the basic unit, which will determine the performance characteristics of the new plane," Borisov said.

But the engines are only one part of the modernization of the Tu-160. The aircraft are essentially going to be gutted and fitted with completely new avionics and weapons.

“We are going to purchase the entire fleet of our strategic Tu-160 bombers in their new version and carry out heavy upgrade of operational aircraft where only the fuselage will remain while all the onboard radio-electronic equipment and engines will be replaced,” Borosov said. “That is why, we will get the renewed fleet of strategic aircraft somewhere by 2030.”

While the new Tu-160M2 will receive some low observable coatings, the Blackjack remains primarily a cruise missile carrier. Unlike American bombers such as the Northrop Grumman B-2 Spirit or the B-21 Raider, the Russian Air Force relies primarily on long-range standoff weapons to strike targets inside heavily defended airspace. As such, the Tu-160M2 will receive stealthy next-generation long-range cruise missiles.

"Alongside, we are developing new airborne weapons, and you can’t compare the Tu-160 plane with the Kh-55, Kh-550 and even Kh-101 missiles and the plane, which we hope to get serial-produced by the 2030s with new airborne weapons that will have quite different ranges," Borisov said.

For Russia, given the role that its bombers play in both its conventional and nuclear doctrine, the upgraded Tu-160M2 seems to be a commonsense and relatively affordable way to recapitalize its fleet. Certainly, it is a more cost effective and technically feasible route than immediately trying to move directly into program to develop a stealth bomber such as the PAK-DA.

Eventually, Russia will probably develop and field a PAK-DA, but the Tu-160M2 should suffice for the short to medium term future.