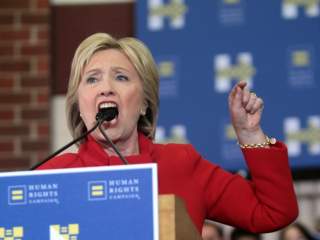 A rock and a hard place. Scylla and Charybdis. Sanders and Trump. These are just some of the metaphors and men Hillary Clinton finds herself caught between on the trade issue.

In truth, Hillary’s ultimate problem in the 2016 presidential race may not be Benghazi, Emailgate, Filegate, Monica, Pardongate, Vince Foster, Whitewater, or a broad-based perception that she is a cold, calculating and untrustworthy woman. Instead, it may simply be America’s ill-considered trade deals—and the pivotal role her husband Bill has played in selling American workers down the offshoring road.

It’s bad enough President Bill, with Hillary’s support, signed the NAFTA agreement in 1993. The Clinton spin here was that we had to help Mexico build up its manufacturing and jobs base to stem the flow of illegal immigration.

Of course, all we got was a flood of even more illegal immigrants—with a healthy dollop of drug traffickers and criminals mixed in. Yes, Donald Trump will have a field day quite rightfully pinning that sin on “Billary” in the general election.

But what is likely to turn out far worse for Hillary is President Bill’s pivotal role in shoehorning Communist China into the World Trade Organization (WTO) in 2001. I know this sad and sordid story all too well because I carefully documented it in my film Death By China—I was a Clinton fan before I did the research.

In that Death By China film, you can catch this astonishing clip of Clinton lobbying on behalf of Communist leaders who he, himself, had called during his 1992 campaign the “butchers of Beijing.” Here’s what Clinton had to say—and check out the companion video to this article for the whole story:

Economically, this [WTO] agreement is the equivalent of a one-way street. It requires China to open its markets with a fifth of the world’s population, potentially the biggest markets in the world. For the first time, China will agree to play by the same open trading rules we do. Never happened before. For the first time our companies will be able to sell and distribute products in China made by workers here in America.

The only question for voters in 2016 is whether Bill Clinton in 2000 was naïve enough to believe such nonsense. Alternatively, was he cynical enough to just flat out lie on behalf of his well-heeled corporate contributors intent on offshoring America’s manufacturing base at the expense of U.S. workers? Either way, there is this grim political reality for Hillary:

Because of her husband’s ill-considered WTO deal, the good old USA has had to endure a tsunami of illegally subsidized Chinese exports, the closure of over fifty thousand American factories, the creation of a huge American army of the permanently angry and unemployed, and a crushing debt of several trillion dollars to a communist country now rapidly using those Made in China dollars to build up a military with the clear intention of seizing territory from its neighbors in the East and South China Seas and pushing the American navy out of the Western Pacific.

If an image of Kevin Costner in the classic film No Way Out just flashed into your mind, well, that’s exactly the situation Hillary now finds herself in. Bernie Sanders knows it—he voted against both NAFTA in 1993 and President Bill’s WTO deal in 2000 and “man of the people” Bernie now has the very clear moral high ground here. That’s why Sanders is prominently featuring a crackdown on China’s unfair trade practices in his raise the roof populist campaign—and exactly why he upset Clinton in Michigan, which has been particularly sliced, diced and flayed by the Chinese.

Donald Trump has taken an even more sophisticated approach to politically leveraging the China issue. He has been as clear about the myriad ways in which China uses unfair trade practices to cheat America as he has been resolute about the need to impose stiff defensive tariffs to countervail China’s illegal export subsidies, currency manipulation, sweat shop labor, pollution havens, and rampant intellectual property theft.

As the final nail in Hillary’s trade coffin, there is her well-publicized flip-flop on the Trans-Pacific Partnership agreement. First, she said the TPP “set the gold standard in trade agreements.” However, once Bernie backed her into a corner and her “coronation” looked more like a quagmire, she reversed her position—reaffirming that strain of political opportunism that seems to infect the Clinton DNA and reinforcing public mistrust of Hillary on the trade issue.

At the end of the day, the 2016 presidential race should come down to the single most important triad of issues on voter’s minds—jobs, the economy and trade. If the race plays out as it should—rather than as a mud-fest clash of personalities—Bernie may yet overtake Hillary at a contested convention. If not, Donald Trump will surely defeat “Billary” because Trump is far more credible on all three points of this economic compass.

Peter Navarro is a professor at the University of California-Irvine. He is the author of Crouching Tiger: What China’s Militarism Means for the World (Prometheus Books). To view the documentary film Death By China and learn more about the Crouching Tiger Project, visit www.crouchingtiger.net.