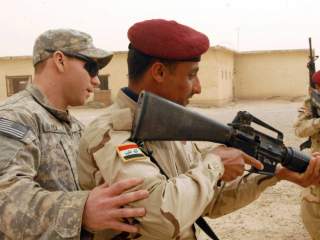 The most unsurprising Iraq headline of the week appears atop this Reuters article: “Iraq puts northern offensive against Islamic State on hold.” The fact that the Iraqi army has further delayed its push into one of Iraq’s most populous cities should surprise absolutely no one. Even those who have recently made even the most cursory observations of the state of Iraq’s internal security and its campaign against the Islamic State (aka ISIS) know that it has been an interminable endeavor.

The Reuters article contained a couple of quotes which were particularly illustrative of the suboptimal state of the institution charged with retaking Mosul and eventually restoring effective security and governance to the rest of the country. Early in the article, Major General Abdullah al-Jubbouri – the Iraqi in charge of the pending offensive – clarified that he is waiting for additional tribal and federal police units to arrive in the area to “hold territory.” It seems his troops simply cannot be bothered with an integral element of successful anti-insurgency operations (see the 2007 Petraeus-led “surge” and its “clear and hold” strategy).

The second eyebrow-raising quote in that article comes courtesy of U.S. Army major Jon-Paul Depreo – an operations officer for the anti-ISIS coalition – who cites difficult terrain and notes that the Iraqi army forces “aren’t from that area necessarily, so they’re learning the area.” That quote is an especially damning commentary not only on the Iraqi army’s failure to integrate populations from different regions of the country, but also on its inability to develop a basic understanding of its domestic terrain. This is a country slightly larger by area than the state of California but devoid of any significant population in much of its west and south. Imagine the California National Guard delaying an operation in Redding because it was institutionally ignorant of the physical and human terrain of Northern California and its soldiers were drawn almost exclusively from the Los Angeles and San Diego metro areas. It would be laughable.

As Daniel L. Davis noted here in TNI just a few weeks ago, Mosul is raising anew many legitimate concerns about the Iraqi army’s competence and motivation, and whether it will be able to bridge sectarian division and secure the entire Iraqi state. Davis also derided what he called the “magic beans” idea, which he believes has permeated Washington: the idea that the insertion of a handful of U.S. Special Operations Forces and other military advisors to Iraq will somehow dramatically improve the operational capabilities and competency of the Iraqi military overnight. He is right to conclude that this will never happen.

However, Davis neglects policy drivers in his narrow focus on the policy implementation. It is not necessarily that policymakers in Washington (particularly within the Obama administration) believe that the addition of small numbers of American advisors will magically hasten the ouster of ISIS from Mosul and the rest of northern and western Iraq. The steady increase in American “advisors” there is more a reflection of strong Iraqi political opposition to a large American military footprint in the country, the fact that the Obama administration declared an end to the Iraq War nearly five years ago, and the pervasive opinion that the Iraqi government should take responsibility for its own security.

Thus the U.S. military finds itself playing a role familiar to anyone who has participated in a higher education group project: that of the much more competent individual, growing impatient with the incompetence and/or apathy of his peers and shouldering an increasing amount of the burden in completing the task at hand. Indeed, the announcement of the campaign’s delay follows promptly after reports that the Pentagon is considering sending more U.S. troops to the country with the “[focus] on what is it we need to do to maintain momentum in the campaign and what specifically do we need to do to enable operations in Mosul.” Translation of that deftly-deployed Pentagonese: “We’re going to need more of our guys because theirs just aren’t going to be able to get the job done by themselves.”

This is not to say that the Iraqi military situation is entirely hopeless. The more dedicated and better-trained Iraqi Special Forces (particularly the so-called “Golden Division”) have demonstrated remarkable skill and competence in operations against insurgents. But these units were never designed or trained to hold territory for a sustained period. So as it becomes clearer that the regular Iraqi army is not going to spontaneously evolve into an effective fighting force capable of executing that mission, the U.S. military presence there will likely grow further still. Though these deployments will likely fall under the umbrella of Operation Inherent Resolve, another name would be far more appropriate – perhaps “Operation Blowfish,” in a nod to Hootie & the Blowfish, whose debut single was “Hold My Hand.”