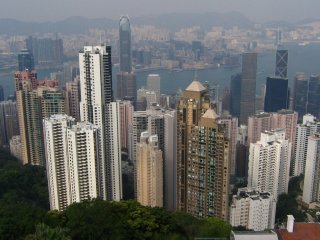 Old Lum's price is HK$220 (US$28). His service is washing cars in the parking lots of Kowloon Tong, where his regular customers, Hong Kong's old-money types, live and work. To see him in action is to witness life in one of the world's most unequal cities.

Mr Lum (a pseudonym) is in his 70s. He's not sure exactly how old because his personal records, and those of most of his family, were lost in the war years of his childhood. He's had a troubled adult life too. A delicate inquiry suggests he is illiterate. What can also be inferred from his appearance is that he is not well. During summer he works shirtless, so you can see his body has that skinny-tubby look that some old folks have, thin limbs and a swollen belly. His complexion hints at liver problems.

He gets free medical care, the one public service that is reliably good in Hong Kong, but has never asked for welfare. He takes pride in self-reliance and considers himself a businessmen rather than a charity case. His franchise is a customer base of a dozen or so rich families, relationships built over 30-years. In accounting terms, the only tangible assets of his business are a plastic bucket, a bottle of detergent and a deerskin cloth. Rags can be obtained for nothing. In some locations he can also make free use of a hose.

His routine is well practiced, deliberate and slow. He soaps the car all over and then washes it off, section by section. He takes particular care to clean each spoke of the wheels. It's tough for him to get down on his knees, but there he is, down at ground level. He patiently dries the car off with the chamois and lastly the windows. The whole operation takes about half an hour. It's awkward to watch.

He must take special care with all of his charges. Some garages in Hong Kong wouldn't look out of place in Monaco. The territory levies a 200-300% tax on luxury vehicles, but consumers aren't deterred; they buy them anyway. It's quite common to see limousines priced over HK$2 million and sports cars twice that. Mr Lum washes exotic models that you've probably never even heard of, worth HK$10 million or more. Some of his clients own several.

He has tried to raise his price a few times, to HK$250 or even HK$300. But his customers, those who drive the Paganis and the Maybachs, drive hard bargains too. They're business people with factories in China and office towers in Hong Kong, and tough negotiating is instinctive for them. Fair enough, you may be thinking. But Mr Lum's rate of HK$220 is per month. He will wash your car six days a week each month for that much.

If he works 10 hours per day, he can do 20 cars maximum. So at most he can make about HK$4000 per month, or about US$500. He lives far away from this neighborhood, in conditions unknown, but you can guess they won't be comfortable. At best he may be provided rent-free public housing. He might even live in one of Hong Kong's notorious birdcage shared apartments. He works all year with no holidays, six days per week.

He takes every Sunday off. On this day he offers his time for volunteer work, to help the needy.