A Horrific Thought: Could Russia and Israel Clash in Syria? 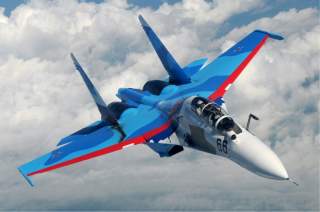 Moscow's intervention in Syria has put Russian forces on Israel's doorstep. Though Israel and Russia have set up a hotline to avoid any conflicts, there remains a possibility--however remote--that Israeli and Russian forces may clash.

It won't be the first time. During the War of Attrition between Israel and Egypt in the early 1970s, Soviet pilots supporting Egypt engaged in dogfights with Israeli jets, only to see the vaunted MiGs blasted out of sky.

So what might a Russian-Israeli conflict look like? It is actually easier to say what such a conflict would not look like. It would not be a war because there is no reason for war: Russian and Israel do not have territorial designs on each other, neither is out for regime change, and both have nuclear weapons. A Russian war with Israel would inevitably drag in Israel's big brother, the United States.

It would probably not involve ground or naval combat between Russian and Israeli forces. Russia has no reason to enter Israeli territory, or help Iran and Hezbollah to do so. After its Lebanon fiasco and now facing a potential Palestinian intifada, the last thing Israel wants is to put boots on the ground in a Syrian civil war where the only choice is which evil wins. There is the potential that Russia could be drawn into a war between Israel and Hezbollah, but then Hezbollah has enough trouble fighting Syrian rebels and dealing with domestic Lebanese politics, without provoking a fight with Israel.

That leaves aerial combat between Israeli and Russian jets as the most likely possibility. We can envision several scenarios where this might occur, accidentally or deliberately. Perhaps Israeli planes enter Syrian airspace deemed off-limits by Moscow, either accidentally or as a show-the-flag signal, and Russian planes intercept. Perhaps Russian planes enter Israeli airspace for the same reasons. Or, Israeli aircraft strike arms convoys bringing Iranian arms to Hezbollah, in transit through Syria.

Whatever the cause, any battle would probably involve a small number of aircraft on both sides. Possible antagonists include Russia's Su-30 fighter and Su-34 strike fighter, versus Israeli F-15s and F-16s. To make this mix even more interesting, Israel is scheduled to receive the F-35 in 2016: given how long the Syrian civil war is likely to last, critics and supporters of the F-35 who wonder how the Lightning II will fare against advanced Russian jets may have their questions answered. As always, the Middle East has the dubious honor of being the world's weapons testing ground.

As for which aircraft would emerge victorious in this contest, I don't know, and neither does anyone else. The F-15 and F-16 have had more combat time over the years than the newest Russian aircraft, but the fact is that it is been decades since Israel, Russia, the United States, or any other nation has faced serious air opposition with well-trained pilots and sophisticated aircraft.

However, we can point out some possible facets to any potential Russian-Israeli conflict. Electronic warfare will certainly be key. Russia has deployed advanced jammers in Syria. On the other hand, Israel – which helped create Stuxnet – is extremely proficient in cyber warfare. Should both sides choose to unleash these capabilities, the Syrian skies may become unfriendly to radars, radios and computers.

Both sides have advanced air-to-air missiles, with Israel employing the beyond-visual-range, infrared-homing Python 5, while the Su-30 can fire radar-guided and infrared-homing weapons. Both nations equip their pilots with helmet-mounted sights.

Russia has sent advanced anti-aircraft missiles to Syria, but these are short-range weapons rather than long-range missiles like the S-300 which would so threaten Israeli airspace that Jerusalem might very well treat them as a casus belli (and yes, some outlets are saying otherwise). On the other hand, Israel is arguably the most creative nation in the world when it comes to drones, leaving open all sorts of possibilities for unmanned mischief.

Hopefully, all this will remain speculation. Russia and Israel have enough enemies to fight without having to fight each other.