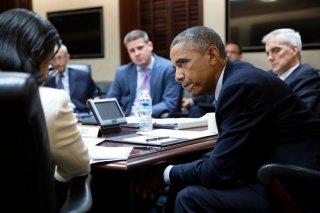 That was a rare point of agreement in a debate last week between Colin Dueck and Trevor Thrall, both associate professors of political science at George Mason University. The event, entitled “What’s Wrong With Obama’s Foreign Policy,” was hosted by the GMU chapter of the Alexander Hamilton Society.

Drawing on some of the points made in his forthcoming book, Dueck kicked things off by arguing that president’s foreign policy was premised on three objectives: retrenchment, accommodation and nation building at home.

Obama’s hope, Dueck contended, was that America’s retrenchment abroad would entice U.S. allies to shoulder more of the burden in keeping the peace. On the other hand, the president believed that trying to accommodate U.S. adversaries would make them more beign. All of this would enable President Obama to focus more of his energies on domestic issues, which are “most important” in Obama’s mind.

Internationally, this has proven to be a recipe for disaster, Dueck argued. Instead of encouraging them to step up, America’s retrenchment has only frightened U.S. allies, and often led to a breakdown of order in places like Iraq. At the same time, it has emboldened America’s adversaries who, despite Obama’s best efforts at engagement, continue to work against U.S. interests.

Domestically, however, Dueck argued that Obama’s foreign policy had been extremely successful, at least during his first five years in office. For instance, Afghanistan didn’t become Obama’s Vietnam, and Democrats actually maintained an edge over Republicans on foreign policy issues during the 2012 presidential campaign. This allowed Obama to concentrate on advancing his domestic policy agenda, where Dueck believes the president has been surprisingly effective. In fact, while personally disagreeing with the president on these issues, Dueck argued that Obama has built the “most significant liberal policy legacy since Lyndon Johnson.”

Unfortunately, for the president’s sake at least, the shortcomings of Obama’s foreign policy have become increasingly apparent as of late, which has constrained his ability to advance his domestic agenda. Indeed, Dueck noted that in the wake of ISIS’s rise, the American people have again begun rating terrorism as one of their top priorities. This has worked to the GOP’s advantage, Dueck argued, as seen in last year’s midterm elections.

This is good news, Thrall argued, because despite its unmatched power, America’s ability to influence other nations is severely limited. In particular, Washington is rarely able to coerce or compel other nations to do its bidding. Moreover, intervening militarily to coerce or compel adversaries almost always makes things worse, Thrall argued, pointing to a long line of U.S. foreign policy disasters from Vietnam to the Iraq War and Libya. “Sometimes you just can’t fix” other societies, Thrall contended.

Dueck felt that this went too far.

While critical of the decision to invade Iraq in 2003, and in particular to how the invasion was executed, Dueck said that the appropriate question for the United States was how to get military interventions right. This again, comes back to a question of strategy, and how to tailor means with ends.

With exceptions like the raid that killed Osama bin Laden, Dueck argued that Obama had failed to intervene properly. Still, he maintained, there is a middle ground between isolationism and the Bush Doctrine, and America needed to find the appropriate balance. This will be a question for the next president, Dueck contended, because Obama will remain stubbornly committed to his current strategy until January 2017, come hell or high water.