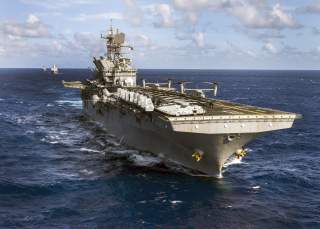 Through the lens of the submarine’s periscope, the tramp steamer looks like a bathtub toy as it bobs on the waves.

But to the German U-boat captain observing his prey from six feet below the surface of the North Atlantic, it’s the perfect victim. A lone merchant ship sailing between New York and Liverpool in the summer of 1916, with no destroyers to escort it.

The U-boat skipper briefly considers firing a torpedo at the ship. But why waste a precious tin fish on a helpless rustbucket when his submarine only carries six torpedoes? And so the U-boat rears out of the ocean like a prehistoric sea monster, its crew emerging to man the deck guns. Soon the merchant ship shudders under the impact of a cannon shell. The ship comes to a stop as its crew scrambles to the lifeboats.

Suddenly, panels and hatches on the steamer slide open. Flame and smoke erupt as it fires a broadside of high explosives into the stunned submarine. Its gunners swept off the deck and its hull punctured, the submarine sinks beneath the waves. The unlucky U-boat was the victim of a Q-ship, an armed merchant vessel (or a warship disguised as a merchant ship) that cruises the sea lanes in search of unwary submarines.

Q-ships are gone, and so are U-boats. Any modern submarine skipper who surfaces his boat to sink a target, rather than blasting it with a missile or torpedo from miles away, deserves to be shot out of his own torpedo tube.

And yet, for the newest scourge of the high seas, Q-ships may be the answer.

Hybrid warfare—that witches’ brew of regular and irregular warfare, covert special forces (like Russia’s “little green men” in Crimea), and state-sponsored insurgents and criminal gangs—is already a fact of life on land in conflicts such as Ukraine. Now it’s coming to the water.

Old-fashioned criminal piracy already flourishes off the coast of Africa and in Southeast Asian waters. China has used merchant ships and fishing boats to harass U.S. Navy warships in the South China Sea.

Their targets won’t be just merchant ships; they will hit oil platforms and mining rigs. They will operate under plausible deniability: go ahead and prove that Russia or China was behind that innocent-looking trawler that blew up a container ship.

And that’s where today’s Q-ships would come in. Like decoy cops trolling for muggers, these vessels could be disguised as cargo ships or yachts. The concept isn’t new. Back in 1675, England’s HMS Kingfisher, camouflaged to resemble a merchantman, was used to trap Algerian pirates in 1681.

The heyday of the Q-ship was World War I, when the British deployed hundreds of ships. Most were merchant vessels with hidden armament, but a few were special-built warships. They weren’t particularly effective, sinking perhaps ten U-boats at a cost of sixty-one Q-ships.

Yet despite the unfavorable math, the covert sub killers actually helped achieve a decisive result. Strange as it may sound in twenty-first-century naval warfare, Imperial Germany had initially waged its submarine campaign in accordance with maritime law, which held that merchant ships could only be sunk if submarines surfaced to give the crew and passengers adequate warning to abandon ship before sinking them. But the threat of Q-ships induced Germany to switch to unrestricted submarine warfare, where subs remain submerged and torpedo their targets without warning. This meant sinking American ships, which gave President Woodrow Wilson an excuse to enter the war against Germany.

Modern Q-ships probably won’t drive off the little blue men. But it might make them a lot more cautious. Imagine their surprise when they discover that beneath the rust are well-trained sailors and commandos with machine guns, rocket launchers and a detachment of commandos. At the very least, they’ll be armed with something more than Britney Spears songs.

Of course, this isn’t a risk-free option. Q-ships could be sunk by little blue men. And there is always the chance that a nervous Q-ship might accidentally sink an innocent vessel by mistake, generating an embarrassing outcry.

It could also ratchet up the level of violence on the sea as everyone gets a bit more trigger-happy. But that’s the point of a Q-ship—not to make life easy for pirates.