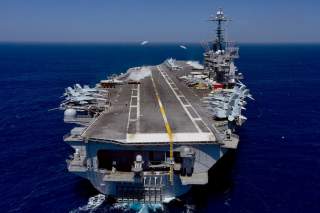 As if things could not get any worse in the South China Sea, China’s placement and testing of anti-ship missiles in the South China Sea all but confirms Asia’s worst fears: America’s goal to ensure that China’s rise is peaceful and that Beijing would take its place among nations of the Asia-Pacific and larger Indo-Pacific as a “responsible stakeholder” is dead and buried.

And to make matters worse: Beijing does not seem to care about the tension it’s creating throughout the region with every runway or missile it places on its fake islands.

“China’s deployment of national defense facilities on its own territory is reasonable and justified,”explained Chinese spokesman Hong Lei on Wednesday. He remarked, “It has nothing to do with the so-called militarization.” Unfortunately, nothing says militarization like advanced missiles that are capable of sinking naval warships.

So what is the United States’ next move? Is there any way to halt China’s seemingly unstoppable advance towards during the South China Sea into “Lake Beijing”? The first step is to admit failure — to admit that Washington’s policy of trying to mold and shape China’s rise and hope it would not challenge the status-quo is over. Washington must now do all it can to halt Beijing’s attempts to alter the status-quo through slick methods of coercion. While some of these ideas I have laid out in a previous column, considering that Chinese actions throughout the South China Sea have intensified, they are worth reintroducing and expanding upon.

I would argue for a radically different approach in an effort to halt Chinese coercion in the South China Sea. Such an effort must include the following:

1. Time for Communications 101: Manage the message (And don’t go off message):

Start with a consistent, “top line” message that would be repeated over and over with singular clarity throughout the administration. It would enunciate clearly America’s main geopolitical aims and intentions in Asia. Something like the below would work well:

“America’s most important goal — that it shares with partners and allies across the Asia-Pacific and wider Indo-Pacific — is the maintenance of a peaceful and prosperous status-quo that ensures no one nation unilaterally coerce other countries or attempt to bend their will through coercive measures, turn near-seas or oceans into territory or use hostile acts to achieve its aims.”

2. ‘Lawfare’ must be intensified:

Washington should work with its allies and partners in the South China Sea to settle any disputes in the region that do not involve Beijing. America must work with its friends throughout Asia to make sure they can speak with a united, multilateral voice against Chinese coercion. This would be a big down payment towards such a goal.

And while certainly not an easy task, Beijing’s growing mastery of the region could spur these parties to reach agreement. With this concluded all parties that have claims against China could then join the Philippines and file their own challenge in recognized international courts. While “lawfare,” as it is now know, will likely draw no formal challenge from China beyond its claims of “indisputable sovereignty,” a much larger filing by a united front of nations would certainly constitute a stronger action.

While Washington would take no stance in such a large, multilateral lawfare action, it could offer important support in the press and diplomatically, urging Beijing to settle such disputes before court rulings turn public opinion even further against its efforts to dominate the South China Sea.

Another idea along the same lines could see South China Sea claimants file a flood of separate lawsuits — but all filed simultaneously for maximum impact. This would clearly make China worry — creating a public-relations nightmare that no one dismissive press conference could easily cast aside.

With the success last year of a CNN film crew demonstrating to the world how fast Beijing was changing the status-quo with its island reclamation projects in the South China Sea, it seems clear that shaming China could be part of an effective plan to halt its challenge to the status-quo.

So why not take this approach a step further? Why not make the world aware of every move Beijing makes? For example: when China constructs a new runway that could be used to patrol the South China Sea, photos and video should be distributed to the media immediately. Or, if Beijing places jets or even more missiles on its new islands, the world should have pictures and video plastered on every major news outlet as soon as possible. While this does happen organically, a US government effort that could lead such an effort would be much more effective and have more resources behind it.

Taking this idea even further, if U.S. vessels exercising freedom of navigation operations (FONOPS) come under Chinese harassment in the South China Sea, the episodes should be captured on video and placed on YouTube immediately. Even if they are not harassed, Washington should provide ample evidence of its peaceful intentions through video and audio footage of every FONOP, showing the world its transparent approach–a major contrast to Beijing.

Indeed, shaming China for its actions — or what I like to call “shamefare” — will allow America and its allies to win the battle of competing narratives and put Beijing on the defensive. China would be left having to constantly explain its actions.

As many defense analysts have stated, China is not the only actor that can use an anti-access strategy.

Washington could assist other South China Sea claimants to develop or purchase advanced anti-ship weapons — or at least look the other way as they do so.

One very real possibility would be for Japan to sell the Type 12 missile system to the Philippines, Taiwan or even perhaps Indonesia if interested. While the missile has limited capabilities and is certainly not the most advanced available, the weapon could be updated to increase its range, making it even more deadly.

Furthermore, additional anti-ship and ground-attack assets could be purchased from third parties or developed jointly, with the goal of quickly destroying any bases or stationed weapons systems based on China’s new islands.

6. And if you really want to get Beijing’s attention:

If China continues to raise tensions day by day and island by island in the South China Sea it might be time for Washington to make some serious adjustments in its foreign policy thinking — making veiled references that it might consider holding at risk what Beijing holds most dear.

Recent publications mark a subtle shift in the thinking of US-based China and Asia scholars. Many argue along these lines: If China is bent on changing the status-quo in Asia, why should America respects its so-called core interests? If Beijing won’t respect Washington’s interests, two can play such a game — with Beijing once again being forced to play defense.

And there are many ways to do this. One idea seems straightforward that would drive home the message nicely: beefing up Taiwan’s defenses. If Taipei wishes to enhance its own military with progress toward new conventional submarines, or by purchasing updated F-16s or even the new F-35, Washington should suggest it is seriously considering such ideas. America could even float the possibility of large arms sales agreements with Vietnam and the Philippines as a way to level the playing field.

Moving away from military-based strategies, Washington could also speak out to a much greater extent on human rights abuses in China — specifically in Tibet and also in Xinjiang. Regular invitations to America and even the White House for the Dali Lama and Chinese human rights activists would certainly get the point across.

Lots of ideas … but will Washington act?

The above is just a sample of some of the things Washington could do and clearly shows that a creative, asymmetric strategy could turn on the tables on Beijing. The question as always is this: does America have the willpower to challenge China’s coercive actions? We know one thing: Asia — and indeed the world — is watching.

Harry J. Kazianis (@grecianformula) is a Senior Fellow at the Center for the National Interest. This piece first appeared at Asia Times here.