This Is How America Can Stop North Korea's Nuclear Missiles 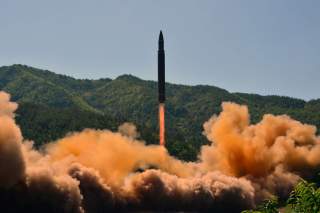 On January 18, the Senate Armed Services Committee held a confirmation hearing for Mike Griffin, President Trump’s nominee to be undersecretary of defense for research and engineering. During the confirmation hearing, Sen. Tom Cotton asked Griffin about the feasibility of “having boost-phase missile defenses deployed on a rapid basis, in particular, airborne boost-phase missile defenses” in the near future.

“I think it’s very feasible to do it,” Griffin answered, according to a report in Inside Defense, an industry publication. “It was feasible to deploy boost-phase defenses, particularly against a nation with the geography of North Korea, it was feasible many years ago to do it. What we have lacked in the missile defense arena, until recently, is the will, not the technology and not the means.”

Griffin later added that, if confirmed, he would be a strong champion of deploying an air-launched boost-phase missile defense system. “I strongly support such developments,” he said.

Griffin’s comments are the latest example of America’s growing interest in pursuing boost-phase missile-defense systems to deal with the North Korean nuclear threat. As the Inside Defense article notes, the most recent National Defense Authorization Act that was signed into law last November urged the Defense Department to “develop and demonstrate a boost-phase intercept capability for missile defense as soon as practicable.” Lawmakers are pushing for $100 million in funding for that effort.

Boost phase is the first of the three phases through which a ballistic missile travels on its way to the target. It occurs from the time the missile is launched until the end of the powered phase of the flight. There are a number of advantages in intercepting a missile during boost phase, including that it presents a larger target and preempts the use of decoys. As a 2012 National Academy of Sciences study explained: “One of the primary perceived benefits of boost-phase defense is the ability to shoot down a missile during its powered phase, when it presents a bright plume signature and before it disperses its payload and countermeasures, thereby clearly identifying the target to be destroyed.”

The primary drawback of boost-phase defense is time. A missile is only in boost phase for somewhere between one and four minutes. During this time, the missile launch must be detected, a determination has to be made about whether it is hostile and the interceptor must engage the target. To successfully engage the missile in such a short time frame, the platform carrying the interceptor needs to be located near the launch site, making boost-phase defense nearly impossible against large countries like China and Russia (assuming the missile is launched from deep inside their territory). Even a country like Iran presents a nearly insurmountable challenge.

North Korea is almost uniquely suited for boost-phase missile defense, given its geography. That in no way means it would be easy. Besides all the technological challenges, the platform carrying the interceptor (most likely an unmanned aerial vehicle) must be positioned near enough to the launch site to engage the missile without itself being vulnerable to attack. This is probably doable given North Korea’s limited air-defense capabilities. Still, the challenge of determining whether the missile is being launched at the United States or one of its allies, or whether it is simply a test, would persist. Moreover, positioning it close to North Korea would almost certainly spark fierce objections from neighboring countries like China and Russia, which would insist that they are the real targets.

Furthermore, as the 2012 National Academy of Sciences report noted, “Since the timelines for engagement in the boost-phase are extremely short, the on-site commander must have authorization from the National Command Authority to launch an interceptor immediately after a threat missile has been detected.” This could prove especially problematic because, as just noted, this commander would have to determine whether the missile was hostile or just a test.

Still, with few options available to deal with North Korea’s nuclear-tipped missiles, the Pentagon and larger defense community are pushing ahead to see if these challenges can be overcome. And, there have been some promising early results. For instance, in an article in Proceedings magazine last summer, Lt. Samuel S. Lacinski pointed to a MIT simulation that demonstrated the feasibility of using the MQ-9 Reaper drone as a boost-phase intercept (BPI). In the simulation, the drone relied on the infrared Multi-Spectral Targeting System (MTS-C) sensor to track the missile. As he noted, the Missile Defense Agency has already tested an integrated MQ-9 Reaper and MTS-C to track missiles from boost phase to midcourse. During the simulation, two UAVs with MTS-C tracked the missile, while a third equipped with interceptors destroyed it. The MIT analysis found this system was effective for ICBMs and Intermediate-Range Ballistic Missiles (IRBMs), but less so against medium-range ballistic missiles that have shorter burnup times.

And, as I noted in June of last year, the Missile Defense Agency has published a request for information (RFI) asking for proposals for a High Altitude Long Endurance (HALE) unmanned aircraft equipped with lasers to destroy ballistic missiles during their boost phase. Although lasers hold great promise for missile defense in the future, the near-term focus is likely to be on kinetic intercepts.