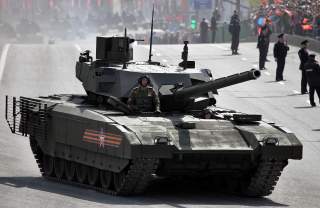 U.S. production of tanks has fallen to the lowest level in living memory. A grand total of 12 Abrams main battle tanks per year are coming out of the nation's last remaining tank plant in Lima, Ohio. Meanwhile, Russia plans to equip its forces in Europe with hundreds of next-generation tanks that look much more survivable than what U.S. soldiers have.

The U.S. Army thus faces a crisis in heavy armor as it races to catch up with Russia after being distracted for many years by the global war on terror. Although Congress is moving to increase spending on tanks, the modernization plan that the Trump administration has inherited from the Obama years would take nearly a quarter-century to upgrade the tanks in armored brigades to a more capable standard.

At that rate, war could break out long before modernized tanks reach most of the force. In fact, the failure of America and its NATO allies to replace their aging armored vehicles has become an invitation to aggression. Russia already enjoys a quantitative edge in regional armored forces. U.S. allies like Germany, France, and Italy each have less than 300 tanks in their active force. Russia has thousands. Moscow also would enjoy the tactical advantage of surprise in any westward thrust.

But now Russia is beginning to field a much better tank than the outdated vehicles operated by the U.S. Army and its allies. Dubbed Armata, the new tank will carry explosive reactive armor, active protection to intercept incoming antitank rounds, and a radar to enhance targeting of enemy forces. U.S. Army officials admit that Russia has reached "parity" with western armored capabilities, but as Armata is fielded it will pull ahead.

It is no exaggeration to say that this disparity in capabilities could lead to U.S. defeat in a future East-West war. It certainly doesn't help the cause of regional deterrence. Unfortunately, it is too late to start a new vehicle program aimed at restoring the U.S. Army's edge in ground combat. That would take decades to field. What the Army needs to do is greatly accelerate production of the latest Abrams tanks, and then add enhancements as they become available.

General Dynamics, prime contractor on the Abrams tank, has proposed a plan that would modernize all the tanks in U.S. Army heavy brigades in five years while also addressing President Trump's stated desire to reduce the unit cost of each new vehicle. Simply stated, the plan would produce 22 tanks per month rather than the five proposed by the Obama administration, reducing the cost of each tank by at least 15%. The company says it can begin accelerated production within 18 months after a multiyear contract is signed.

In the process, the plan would create thousands of new manufacturing jobs, mainly in Midwestern states like Indiana, Michigan, Ohio and Wisconsin, but also in Florida and Pennsylvania. That's where the supply chain for U.S. armored vehicles, or at least what's left of it, is concentrated. But the point here isn't to create jobs -- it's to give U.S. soldiers in Europe and elsewhere the heavy armored vehicles they need to either deter aggression or defeat it.

A multiyear production contract producing enough of the latest variants of Abrams to equip three armored brigades each year would upgrade all of the Army's heavy brigades nearly two decades faster than the Obama-era plan. It tells you a lot about how distracted the previous administration was from a looming threat in Europe that only a few years ago, senior Pentagon officials were seriously proposing that the nation's last tank plant be shut down.

Moscow's invasion of Ukraine awoke policymakers to the danger, but Army modernization plans haven't changed sufficiently for lack of money. Defense spending has been capped by law every year since Russian intentions became clear, and the Army of necessity has to fund personnel and readiness before it gets to modernization. So the service has had to scrape by on about two day's worth of federal spending per year to cover all of its equipment needs.

That simply isn't enough money to buy all the items it requires for deterrence in Europe. The Army needs more money for modernization. But it's hard to imagine a higher investment priority than fielding tanks capable of withstanding an attack from Russia's rapidly modernizing military. With all the other local advantages Moscow enjoys, failing to equip U.S. soldiers with the latest version of their signature combat system looks like a potentially fatal step.

The good news is that the General Dynamics plan can be funded for only four hours of federal spending annually above what the Obama administration was planning to allocate to tanks. It shouldn't be hard for Congress and the White House to pull together that kind of money for a move that might make the difference between victory and defeat in a future war. Policymakers just need to focus on what it would mean for America to lose a land war in Europe. That would be really expensive.

Loren Thompson is chief operating officer of the Lexington Institute and taught nuclear strategy at Georgetown University. This first appeared in RealClearDefense here.