How America and Iran Almost Went to War 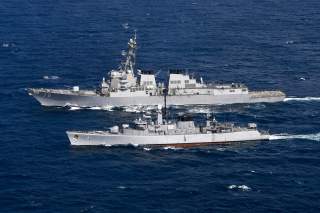 For all its faults, the deal demonstrated that, under certain conditions, an intensely hostile regime such as the Islamic Republic of Iran could be negotiated with. It was even more significant, given that just a few years prior, Obama had something of a showdown with Iran.

In a row regarding its nuclear program, in 2011 the Obama administration, with the support of Congress, sought to tighten sanctions on Tehran. On Dec. 27, 2011, Iranian vice president Mohammad-Reza Rahimi threatened to close off the Strait of Hormuz if sanctions had an adverse effect on Iran’s oil exports.

The threats were nothing new. Verbalizing and demonstrating a willingness to close the crucial global economic choke point was a cornerstone of Iran’s strategy of intimidating the world into permissiveness.

But in 2011, tensions between the United States and Iran were steadily escalating. Earlier that December, a U.S. unmanned aerial vehicle crashed in Iran and was seized by the government. It was never returned.

As the special operations wing of the Islamic Revolutionary Guard Corps, Quds had been implicated by the Obama administration in the assassination attempt on Adel Al Jubeir, Saudi Arabia’s then-ambassador to the United States. Two Iranian citizens were ultimately arrested and charged.

The United Kingdom was also caught in the fray. On Nov. 29, 2011, protestors overran the British embassy in Tehran, injuring three U.K. officials. In response, the embassy closed — and didn’t re-open until four years later.

As the year came to a close, both sides conveyed a willingness to fight. Iran commenced an exercise — including missile tests — in the Strait of Hormuz.

The United States responded by bolstering its naval presence in the region. By January 2012, two carrier strike groups centered on USS John C. Stennis and USS Carl Vinson were on station in the Persian Gulf, with another, USS Abraham Lincoln, on the way.

The American presence alone included over a dozen surface combatants and well over 100 aircraft, augmented by British and French warships and constituting one of the largest armadas deployed to the Persian Gulf since 2003. Long before it became a household term, the White House relayed a back-channel warning, declaring closure of the strait to be a “red line” that would result in a military response.

But Tehran didn’t back down. Iran conducted additional military exercises in the area and repeatedly threatened to close the strait, as well as attack Coalition forces. Tensions ratcheted higher on Jan. 24, when the European Union slapped additional sanctions on Iran’s oil.

With neither side blinking and the number of combatants in the Strait of Hormuz increasing by the day, speculation intensified regarding the risk of war.

Though little-remembered today, the period of 2011-2012 constituted another moment of heightened hostilities in the almost-four-decade conflict between America and Iran. “The light is dimming, and night may well be approaching at long last,” historian David Crist wrote. But just how high was the risk of war, exactly?

Despite being a go-to threat for the theocratic regime in Tehran, it’s unlikely Iran would have attempted closing the Strait of Hormuz, except out of sheer desperation.Its global economic importance guarantees an overwhelming response to such an act.

Furthermore, U.S., British and French forces outclassed and outgunned Iran’s own forces in every way imaginable. The three U.S. carriers each embarked an air wing of 60-plus combat aircraft armed with a deadly arsenal of guided and unguided ordnance.

The Western force was assisted by the world’s most sophisticated intelligence, surveillance and reconnaissance capabilities. In addition, the United States and its allies deployed large numbers of land-based combat aircraft at bases in Bahrain, Kuwait, Qatar and the United Arab Emirates, with still more assets in Djibouti and at Diego Garcia.

Unable to physically prevent America and its allies from entering the Strait of Hormuz, Iran’s strategy focuses on, at minimum, raising the costs of intervention, and at best dissuading the enemy from entering the area at all.

Area-denial capabilities are nothing new for Iran. Land-based anti-ship and ballistic missiles, including the infamous Silkworms and sea mines — both of which proved deadly in the 1980s Iran-Iraq War — are central to Iran’s strategy. The trade-off, however, is such a strategy would legitimize retaliatory strikes on Iranian soil, amounting to a major escalation in the conflict.

This may be a moot point, however. Any clash with Iran could easily mount pressure on the incumbent U.S. administration to expand the war on Iran and even generate the necessary casus belli for regime change.

Through a perverse logic, Iran’s goal in closing the Strait of Hormuz may not be aimed at a physical victory, but a “moral” one. As an authoritarian state, the Islamic Republic often employs crises as a means of maintaining domestic order. While governance by crisis is not always effective, it is a necessity for a government whose legitimacy is constantly at risk.

From time to time, the ayatollah and his henchmen may be willing to risk a military confrontation as a means of establishing dominance and restoring order within their political hierarchy.

Another possible “moral” aim of threatening to close the Strait is to establish and maintain its credibility on the world stage, specifically by demonstrating its ability to successfully defy global powers, namely America.

The two countries have surprisingly avoided a major conflagration for almost 40 years. The “Tanker War” in 1987 and 1988 notwithstanding, the violent rhetoric between the United States and Iran has been unaccompanied by physical violence, due in no small part to American restraint and professional crisis-management skills.

The drawback of restraint, however, is the impression that America will always seek to de-escalate a crisis, creating a sense of overconfidence on the part of intrepid Iranians. It is precisely this restraint and professionalism hard-line elements in Iran, such as the IRGC, attempt to prey upon, engaging in irresponsible and provocative actions to intimidate or cause an incident which reflects poorly upon the United States.

It could then use such an incident to create a damning narrative of victimhood at the hands of America, a strategy the regime in Tehran excels at. Both home and abroad, there is no shortage of markets for anti-American sentiment endorsed by one of the Middle East’s more powerful actors.

In addition, Iran hopes to exploit fears, primarily in the West, that a clash in the Gulf would result in an energy crisis, raising oil prices and creating economic hardships. While the United States would not be as harshly impacted — just 18 percent of American oil exports come from the Persian Gulf — other nations, including China, rely extensively on Middle East oil.

Fear of creating a damaging economic downturn could encourage the United States and other world powers to seek a de-escalation of the crisis. It would be even more to Tehran’s benefit if a considerable percentage of world opinion felt as though America and its allies were exacerbating tensions, thereby being considered at least partly responsible for the crisis.

It all amounts to a high-risk gamble, however, and the Iranians have largely avoided testing the hypothesis. It is also important to remember that Iran relies on the Strait of Hormuz as well, serving as the only conduit of exporting its oil. Any closure of the choke point would damage Iran’s economy considerably.

This fact drives home the point that closing the Strait of Hormuz remains a last-ditch option. Iran has plenty of “safer” means of attacking its enemies, namely via proxy groups such as Hezbollah that can wreak havoc via militancy and terror throughout the region and beyond. These lower-end options permit Tehran to maintain plausible deniability, thereby incurring a lower risk of triggering a major confrontation.

The 2011-to-2012 stand-off also didn’t affect the global economy in any meaningful manner, other than slight increases in world oil prices, suggesting threats of closure were not taken all that seriously. However, even brief slow-down or stoppage of oil delivery through the Strait would have resulted in a significant increase in oil prices, thereby creating hardships whose consequences could reverberate for years to come.

Fortunately, tensions waned and the 2011 crisis passed without a clash. More importantly, change was in the winds. In 2013, Hassan Rouhani was elected president, relieving the hard-liner Mahmoud Ahmadinejad. Viewed by many as a more reasonable voice within the Iranian government, Rouhani was instrumental in enabling the negotiations that led to the signing of the nuclear deal two years later.