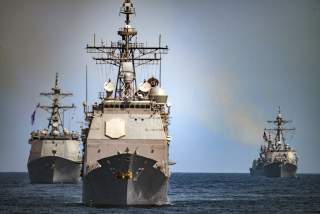 China appears to claim most, if not all of the South China Sea through its so-called nine-dash line, which vaguely asserts control, access and sovereignty over 1.4 million square miles of islands, Pentagon officials said.

Although U.S. officials say China has not clearly articulated what it means, the nine-dash line can be traced back to China’s ruling party from 1928 to 1949 – the Koumintang. The Koumintang retreated to Taiwan in 1949 when the Communist Party of China took over following civil war in the country, however the concept of the nine-dash line has endured.

Naturally, U.S. senior officials and U.S. allies in the region do not recognize this Chinese claim either.

The U.N. treaty also specifies that up to 200 miles off the coast of a country is consider part of an economic exclusive zone, or EEZ. This means the host country has exclusive first rights to resources and any economic related activities.

This means countries cannot, for instance, fish in the waters of an EEZ or set up an oil-drilling effort without securing the permission of the host country. However, activities within an EEZ that do not relate to economic issues are allowed as part of the freedoms associated with the high seas, Pentagon officials explained.