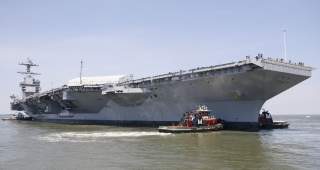 The USS Ford is now going through Builders Sea Trials and is also expected to go through a deployment preparation phase known as “post shakedown availability.” Depending upon progress with testing, the Ford is slated to deliver by as soon as sometime next month.

Navy officials tell Scout Warrior that the second Ford-class ship, the future USS Kennedy, will be 50-percent built this year.

This comes alongside recent Navy reports that the USS Ford is now “99-percent” complete. Ship developers say the USS Ford is expected to deliver to the Navy later this year.

Overall, 93-percent of the Ford's test program is complete, including hull mechanical and electrical assessments, propulsion testing and electronics testing, he added.

The Ford is now going through Builders Sea Trials and is also expected to go through a deployment preparation phase known as “post shakedown availability.” Depending upon progress with testing, the Ford is slated to deliver by as soon as sometime next month, said Capt. Thurraya Kent, with the Asst. Secretary of the Navy for Research, Development & Acquisition.

The Ford-class carriers, beginning with the USS Ford, bring the advent of a wide range of unprecedented ship technologies specifically engineered for this high-tech future class of carriers. As a result, testing the technologies and combat durability of the USS Ford is expected to bring implications for the entire class of Ford-carriers.

There is much more computer automation aboard Ford-class carriers, a development which brings the advantage of decreasing the needed carrier-crew size by as many as 800-to-1000 sailors.

Also, by virtue of conducting a wider range of ship functions, such as diagnostics and machinery, through advanced computer automation, the Navy expects to save as much as $4 billion over the life of the carrier. While the new computer technology has of course been engineered to withstand the most rigorous of combat conditions, upcoming evaluations will set a new precedent for these systems.

The Ford’s new electronic elevators -- which better enable ship crews to reload fighter jets on deck -- also need to be put through “Shock Trials” to see if they can function while under attack.

The USS Ford is built with four 26-megawatt generators, bringing a total of 104 megawatts to the ship.

Furthermore, the ship’s new Electromagnetic Aircraft Launch System will pioneer a new, far more capable, take-off-and-landing technology for carrier aircraft; accordingly, this too needs to be assessed in response to nearby explosions.

The EMALS system uses an electromagnetic field to propel aircraft instead of the currently used steam catapult.

On the USS Ford, the below-deck EMALS equipment has been installed. This consists of a series of transformers and rectifiers designed to convert and store electrical power through a series of motor generators before bringing power to the launch motors on the catapults, Navy developers have explained.

By having this electrical pulse come down, the aircraft is pulled down to the catapult before launch. This allows ship engineers to dial in the precise weight of the aircraft. The ship can then accelerate at the precise speed needed to take off in a smooth way – as opposed to a “shot-gun” type steam catapult.

Unlike steam catapults which use pressurized steam, a launch valve and a piston to catapult aircraft, EMALS uses a precisely determined amount of electrical energy. As a result, EMALS is designed to more smoothly launch aircraft while reducing stress and wear and tear on the airframes themselves, he added.

On the ship, EMALS will be engineered such that any of the ship's four catapults will be able to draw power from any one of three energy storage groups on the ship, developers said.

While carriers often travel in carrier strike groups where they are protected by nearby destroyers and cruisers, ship survivability continues to take on added importance for Navy developers in light of fast emerging threats. Navy weapons and technology experts want aircraft carriers themselves in the future to operate with a much greater level of “survivability.”

In fact, Navy planners to anticipate adding more ship defenses to carriers in coming years, to include the possibility of deck-mounted interceptor missiles, lasers, electronic warfare and other new elements of a layered ship defense system.

Part of the calculus with this approach is, quite naturally, rooted in a broader awareness of emerging near-peer threats to US carriers such as the prospect of enemy hypersonic weapons and China’s DF-21D “carrier killer” anti-ship missile. These kinds of potential attacks, and others like it, underscore the importance of engineering ship platforms with the most “survivability” and ship defenses available.

In fact, long-range anti-ship missiles, such as the DF-21D, have engendered some measure of debate about the future of carriers; a recent think-tank, Navy study (Center for Strategic and Budgetary Assessment) recently found that smaller, faster and more agile carriers may need to be engineered for the future in response to guided missiles able to travel as far as 900 nautical miles.

This being said, many experts and Navy developers have emphasized the important power-projection potential of aircraft carriers as well as a wide array of emerging next-generation ship defenses, such as electronic warfare weapons and improved sensors. Also, there is some commentary among analysts which, among other things, have raised some question as to whether the DF-21D can hit certain moving targets. Furthermore, senior Navy leaders have consistently expressed confidence in the Ford-class carrier’s ship defenses – to include current and future technologies.

Nonetheless, the prospect of these kinds of threats could very well impact the operational range at which carriers can operate near an enemy coastline. If carriers are forced to remain at much longer distances, it presents the risk of there being targets beyond the range of carrier-launched fighter aircraft, limiting the ability for the carrier to project power and hold enemy territory at risk. It is precisely for this reason, observers point out, that the Navy is developing its MQ-25 Stingray aerial re-fueler. This could enable fighters to, in effect, potentially double their attack range.

In particular, the USS Ford is equipped with a new “dual-band” radar able to substantially increase the threat detection envelope for the ship. Being able to detect threats at further distances of course afford ship commanders with more time to make proper tactical defensive decisions. Follow-on Ford-class carriers are receiving a new radar, service officials have explained.

While carriers do not have vertical launch systems able to fire defensive interceptor weapons such as an SM-6 or SM-3 missile, they may be equipped with some deck mounted defensive weaponry such as anti-torpedo sensors and interceptors, lasers designed to incinerate approaching attacks, hypersonic weapons or even rail guns at some point in the future. In fact, the Navy is now testing and developing an emerging anti-torpedo technology engineered to knock out approaching enemy torpedo fire. Details on this emerging system, however, are not available from the Navy for security reasons.

Other defensive technologies now operational on Navy surface ships include the Close-in-Weapons-System or CIWS; this defensive weapon uses radar, fire control technology and a phalanx area weapon to identify and destroy close in air and surface threats.

CIWS defenses, designed for the closest in kinds of attacks, are currently defending carriers. Other ship-defense weapons include the SeaRAM, Griffin, Rolling Air Frame Missile and Evolved Sea Sparrow Missile; the idea is to engineer a layered system so that, as enemy fire approaches, a ship has a sufficient range of options available to detect and destroy the attack.

At some point in the next few years as part of the ship's developmental process, the Navy will explode bombs in the ocean near its new USS Ford-class aircraft carriers as part of “Shock Trials” to prepare the new ship for combat and operational service and test whether its next-generation technological systems can withstand enemy attacks.

Explosions in the ocean are used to assess the durability and combat readiness of emerging ships and test an ability to continue operations in the event of major enemy attacks. The mock-attacks are intended to replicate the kinds of turbulent maritime conditions known to accompany incoming enemy firepower.