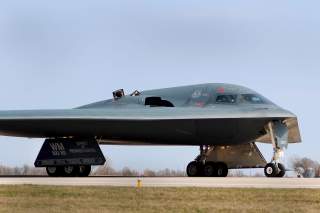 The stealthy Northrop Grumman B-21 Raider, which is currently under development, will eventually form the core of the U.S. Air Force strategic bomber fleet. However, even the B-21, with its state of the art stealth technology will not always be able to penetrate into the most heavily defended airspace as time goes on—Russia and China will continue to advance their air defense capabilities. That is why the Pentagon is developing the Long-Range Stand-Off (LRSO) cruise missile as a companion to the Raider.

The new missile will also serve to keep America’s fleet of ancient Boeing B-52s viable as the mainstay of the nuclear bomber force— 46 nuclear-capable B-52H and 20 Northrop Grumman B-2A Spirits—until they are eventually replaced by the B-21. “Arming our force of strategic bombers with LRSO is critical to ensuring their continuing effectiveness in the face of improving air defenses and to provide a diverse range of response options,” the NPR states. “The LRSO will enable the B-52H to remain an effective part of the nuclear-capable bomber force and preserve upload potential as a key hedge against unforeseen technical and geopolitical challenges.”

However, while the B-52 and the B-2 remain effective, as enemy air defenses rapidly increase in capability, those aircraft are increasingly challenged. Thus, a new bomber is needed urgently. “Given the continuing proliferation and improvement of adversary air defense capabilities and the continued aging of the B-52H, the ALCM, and the B-2A, the United States has initiated a program to develop and deploy the next-generation bomber, the B-21 Raider,” the NPR reads. “The B-21 Raider will first supplement, and eventually replace elements of the conventional and nuclear-capable bomber force beginning in the mid2020s.”

But as the NPR states—and Pentagon officials have testified before Congress in the past—even the B-21 will not always be able penetrate into the toughest of air defenses as time goes on. Indeed, the B-21 was always intended to work as part of a family of systems that work together to penetrate into the most dangerous airspace. Thus, the B-21 will also carry the LRSO as a hedge against the future. “The B-21 will be able to deliver both gravity bombs and the LRSO, the latter supporting the long-term effectiveness of the bomber leg,” the NPR states.

The B-21 is scheduled to make its debut in the mid-2020s, but the mostly classified program is operating under a very tight schedule. “Delays in the B-21 bomber program or associated bomber weapons would reduce the ability of our strategic forces to penetrate adversary air defenses, limit the diversity of our response options, and compromise our ability to send the visible deterrence and assurance signals for which strategic bombers are particularly well suited,” NPR states.

Thus, it is critical that the B-21 program succeed—even if the Air Force has been extremely tight-lipped about the entire effort.