This Is How America Plans to Sink China's Warships 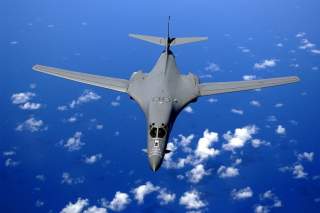 This week the U.S. Navy detailed its plans to rectify the advantage China holds in the area of sophisticated anti-ship missiles.

Speaking at the Center for Strategic and International Studies in Washington, DC on Wednesday, Vice Adm. Joseph Aucoin, the deputy chief of naval operations warfare systems (N9), said that the Long Range Anti-Ship Missile (LRASM) will compete with the new Tomahawk Block IV for OASuW II.

“What I would like to see happen is take those capabilities that we need and start inserting those into a Block IV [Tomahawk], and [compare that] to what we have with LRASM Increment 1, and have those two compete for the next-generation strike weapon,” Aucoin said, Breaking Defense reported.

As The National Interest has previously noted, the LRASM is a joint Navy-Air Force-DARPA program aimed at serving as a stop-gap measure before OASuW II comes on line sometime in the 2020s. The LRASM is manufactured by Lockheed Martin and has a reported range of 500 nautical miles while carrying a 1,000-lb. penetrator and blast-fragmentation warhead.

It is primarily designed to provide the U.S. Navy and Air Force with a precision-guided long-range stand-off capability that can survive in aggressive electronic warfare environments. To achieve this, it uses on-board sensors and a semi-autonomous guidance system to reduce its dependence on intelligence, surveillance and reconnaissance (ISR) platforms, network links and GPS navigation. It also employs “innovative terminal survivability approaches and precision lethality” to avoid advanced enemy countermeasures while still reaching its intended target.

As USNI News points out, currently there is only an air-launched version of the LRASM, while OASuW II is intended to be launched from the Mk 41 Vertical Launch Systems (VLS) featured on many of the U.S. Navy’s guided-missile destroyers and cruisers. According to USNI News, Lockheed Martin is already doing internal tests of the LRASM from MK 41 VLS.

The Tomahawk, on the other hand, has been a staple of the U.S. Navy for decades, which uses the precision-guided missiles to attack land targets from ships. The missile, produced by Raytheon, has a range of about 1,000 miles and can survive in contested environments. On its website, Raytheon notes that “The latest variant (Tomahawk Block IV) includes a two-way satellite data-link that enables the missile to be retargeted in flight to preprogrammed, alternate targets. The Block IV design was initiated as both a cost savings and a capability improvement effort.”

It adds that “planned upgrades to the Tomahawk Block IV include: upgraded communications, a more powerful warhead, and a new seeker designed to hit moving targets at sea or on land in darkness and all kinds of weather.”

The ability to adjust its flight path is one of the new features of the Block IV missile, and is what gives it the capability of possibly being the answer to the U.S. Navy’s anti-ship missile woes. In a test in January of this year, a Tomahawk Block IV punched a hole through a moving ship container. Deputy Secretary of Defense Bob Work later called the test a “game-changer.”

(Recommended: Are Submarines the "Battleship"?)

Bryan Clark, a Senior Fellow at the Center for Strategic and Budgetary Assessments (CSBA) and former naval commander, agrees that pitting the LRASM against the Tomahawk Block IV missile is a good idea.

“Competing LRASM and TASM [a Tomahawk Anti-Ship Missile] for the OASuW mission may be a really good idea,” Clark told Breaking Defense. He noted that the TASM doesn’t have as much survivability as the LRASM, but it is a cheaper option.

Clark went on to point out that “Another option in the mix is [Norwegian firm] Kongsberg’s Naval Strike Missile, which has about the same range and cost as LRASM but is already in production.” Both cost about $2 million a missile.

Ultimately, Clark recommends that the U.S. Navy field the same missiles for land attack or anti-ship missiles so that ship captains don’t have to designate certain tubes for certain missions, but can rather use the missiles as needed for each mission.

The entire OASuW II program is being motivated by the growing anti-ship missile gap between the United States and countries like China, whereas U.S. adversaries boast anti-ship missiles with longer ranges than the U.S. Navy. This leaves U.S. surface ships extremely vulnerable to attacks by enemy ships that are outside their range.