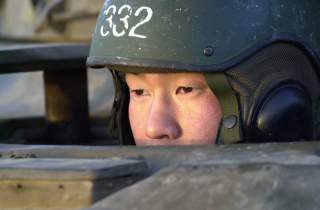 As tensions between North Korea and the United States reach a fever pitch, it’s worth remembering the origins of the hostility: the Korean War.

The general parameters of the war are well known. The conflict began when Kim Il-sung’s forces invaded South Korea in June 1950 with the tacit (if reluctant) support of Joseph Stalin and Mao Zedong. Kim’s forces quickly overran their southern counterparts and were on the brink of unifying the peninsula before U.S. forces intervened under the guise of the United Nations. They quickly pushed the North Korean forces back across the thirty-eighth parallel and threatened to unify the entire peninsula until a massive force of Chinese “volunteers” intervened and pushed the American and South Korean forces back to the thirty-eighth parallel. Thereafter, the two sides settled into a stalemate that more or less persisted until an armistice was signed in 1953.

Less well remembered, at least in the United States, is that America waged a mercilessly air campaign against North Korea during the conflict. As the eminent historian on the war, Bruce Cumings, puts it: “What hardly any Americans know or remember . . . is that we carpet-bombed the North for three years with next to no concern for civilian casualties.”

Indeed, Maj. Gen. Emmett O’Donnell, who led the Far East Bomber Command of B-29s that participated in the bombings, described the plan as going “to work burning five major cities in North Korea to the ground, and to destroy completely everyone of of about 18 major strategic targets.” Curtis Lemay boasted that Strategic Air Command “burned down just about every city in North and South Korea both.” He also estimated that “over a period of three years or so, we killed off . . . 20 percent of the population.” And future secretary of state Dean Rusk, who also served in the State Department under the Truman administration, would say that the United States bombed: “Everything that moved in North Korea, every brick standing on top of another.”

The sheer number of explosives used is absolutely astonishing. As Tom O’Connor has recounted in Newsweek, the “U.S. dropped 635,000 tons of explosives on North Korea, including 32,557 tons of napalm.” To put this in perspective, throughout the entire Pacific Theatre in World War II, the United States dropped 503,000 tons of bombs. And that was throughout an area that was multitudes larger than North Korea (Japan alone is roughly three times the size of North Korea). Not surprising, then, that the historian Charles K. Armstrong has written, “The U.S. Air Force estimated that North Korea’s destruction was proportionately greater than that of Japan in the Second World War, where the U.S. had turned 64 major cities to rubble and used the atomic bomb to destroy two others.”

North Korea’s lack of industrialization limited the number of enticing targets for strategic bombing. Consequently, as Armstrong again points out, “By the fall of 1952, there were no effective targets left for US planes to hit. Every significant town, city and industrial area in North Korea had already been bombed.” This is barely hyperbole: the bombings destroyed 100 percent of Sinanju, 95 percent of Sariwon, 85 percent of Hungnam, 80 percent of Wonsan, and Hamhung, and 75 percent of Pyongyang.

Thereafter, American and allied aircraft turned their sights to North Korea’s hydroelectric plant and the the twenty dams in North Korea that controlled 75 percent of the country’s water, which was needed for agricultural and the production of rice. In May 1953, U.S. forces knocked five of these dams out, causing massive flooding. It also put millions in North Korea at risk for starvation, although the worst of that was prevented because of a massive influx of food aid from the Soviet Union and China. The bombings did cause widespread electrical outages, and by the U.S. Air Force’s estimates destroyed all but 4 to 5 percent of North Korea’s railways.

As the official U.S. Air Force history noted of this time period: “During the last year of the Korean hostilities, American air power executed the dominant role in the achievement of the military objectives of the United States and of the United Nations. . . . No single air operation so gravely affected the Communists as the simple destruction of two agricultural irrigation dams, for this operation, too terrible to execute in its entirety, portended the devastation of the most important segment of the North Korean agricultural economy.”

Most outside analysts are far more skeptical that the U.S. strategic bombing campaign had much impact on the course of the war. The political scientist Robert Pape argues that North Korea and China’s major concessions in 1951 were the result of the air campaign weakening their military forces’ ability to achieve their objectives (coercion by denial) rather than the strategic bombing (coercion by punishment). Many others have argued that air power’s most effective contribution to the Korean War was in the interdiction of enemy lines. In particular, aircraft focused on destroying the bridges near the Yalu River to cut off Chinese and Soviet support. Still, since these bridges were often heavily defended by antiaircraft weapons, and the aircraft of the day had severe limitations, this campaign also had only limited success.

North Korea actually repaired the war damage faster than South Korea, which had been far less damaged during the war. A more enduring impact of the bombing is that it has been used as a propaganda tool by the Kim regime to instill hatred in all their citizens from a very young age. As Bruce Cumings explained: “Every North Korean knows about this, it's drilled into their minds.”