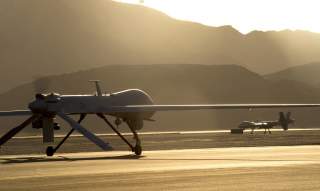 In October of this year, ISIS used a drone, intended for surveillance use, to injure troops on the ground. Unlike typical surveillance drones, this one exploded after local forces picked it up for inspection, an Air Force statement said.

The emergence of bomb-drones, if even at times improperly used by ISIS, presents a new and serious threat to Iraqi Security Forces, members of the U.S.-Coalition and civilians, service officials explained to Scout Warrior. Drone bombs could target advancing Iraqi Security Forces, endanger or kill civilians and possibly even threat forward-operating US forces providing fire support some distance behind the front lines.

Air Force officials explained that many of the details of the intelligence analysis and operational response to ISIS bomb-drones are classified and not available for discussion.

Specific tactics and combat solutions were made available to combatant commanders in a matter of days, service experts explained.

While the Air Force did not specify any particular tactics of method of counterattack, the moves could involve electronic attacks, some kind of air-ground coordination or air-to-air weapons, among other things. However, the service did delineate elements of the effort, explaining that in October of this year, the Air Force stood up a working group to address the evolving threat presented by small commercial drones operated by ISIS, Air Force Spokeswoman Erika Yepsen told Scout Warrior.

“The working group cuts across functional areas and commands to integrate our best experts who have been empowered to act rapidly so they can continue to outpace the evolution of the threat they are addressing,” Yepsen said.

Personnel from the 15th IS, along with contributors, conducted a 280-plus hour rapid analysis drill to acquire and obtain over 40 finished intelligence products and associated single-source reports, Air Force commanders said.

Commercial and military-configured drone technology has been quickly proliferating around the world, increasingly making it possible for U.S. enemies, such as ISIS, to launch drone attacks.

“Any attack against our joint or coalition warriors is a problem. Once it is identified, we get to work finding a solution. The resolve and ingenuity of the airmen in the 15th IS (intelligence squadron)” to protect our warriors, drove them to come up with a well-vetted solution within days,” Lt. Col. Jennifer S. Spires, 25th Air Force, a unit of the service dealing with intelligence, told Scout Warrior.

While some analysts projected that developing a solution could take 11 to 12 weeks, the 15th IS personnel were able to cut that time by nearly 90 percent, Air Force officials said.

“While we cannot talk about the tactics and techniques that the 15th IS recommended, we can say that in every case, any targeting package sent to the air component adhered to rules that serve to protect non-combatants,” Spires added.

The 363rd Intelligence, Surveillance, and Reconnaissance Wing provides a targeting package in support of the Air Component.

“The supported command makes the final decision about when and how to strike a specific target. Once the theater receives the targeting package it goes into a strike list that the Combatant Commander prioritizes,” Spires said.

While James did not elaborate on the specifics of any electronic warfare techniques, these kinds of operations often involve the use of “electronic jamming” techniques to interrupt or destroy the signal controlling enemy drones.