This is How Bad Russia Wants Hypersonic Weapons 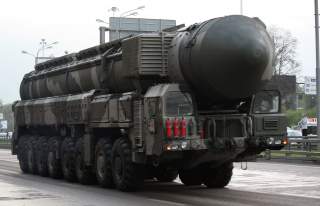 Russia has placed such a high priority on its new Avangard hypersonic boost-glide vehicle that it has placed two other intercontinental ballistic missile programs on hold. The Kremlin does not have the funds to develop and field Avangard while simultaneously developing the RS-26 Rubezh road-mobile ICBM and the Barguzin rail-mobile ICBM.

"It was initially planned to include both the Avangard and the Rubezh in the state armament plan but it became clear later that funds would not suffice to finance both systems at a time,” a Russian defense industry source told TASS. “Therefore, the Avangard was included in the program’s final version as more essential to ensure the country’s defense capability."

The Rubezh is apparently not cancelled; rather both it and the Barguzin are on hold until 2027.

“All the work on the Rubezh and the Barguzin was put on hold until the end of 2027,” TASS’s source said. “A decision on the work’s resumption will be made after the current armament program is fulfilled."

The Russians are likely prioritizing the Avangard because of the Kremlin’s fear the future American missile defenses could undercut Moscow’s retaliatory second strike capability. As such the Russians have chosen to allocate their resources in a way that they believe will deliver the most amount of capability for the dollar—or ruble in this case.

“The Russian defense establishment sees the development of technologies capable of nullifying American missile defenses as a priority - along with a range of other technologies that render U.S high-tech advantage ineffective, such as electronic warfare,” Center for Naval Analyses researcher Samuel Bendett told The National Interest.

“In the early 2000s, about 30 UR-100N UTTKh liquid-propellant missiles were delivered from Ukraine for the ‘gas debt,’” a Russian defense industry source told the Moscow-based TASS news agency. “After the disintegration of the USSR, they were kept at warehouses in their unfueled condition, i.e. they were actually new and capable of going on combat duty to serve for several dozen years. A part of these missiles will become the carriers of the first series of hypersonic glide vehicles in the next few years."

Eventually, as the massive Sarmat—which is powerful enough to fly a South Pole route towards American targets—becomes operational, it too will be used to deliver the Avangard. “With the acceptance of heavy RS-28 Sarmat missiles for service, such vehicles will be mounted on them as well," the defense industry source told TASS.

The Avangard will apparently be equipped with a single massive thermonuclear warhead with a yield exceeding two megatons. With a yield that high, the Avangard will have considerably greater destructive power in an individual warhead than a typical modern ICBM, which have smaller yields usually no more than 500 kilotons.

The Russians claim that a production contract for the Avangard weapons has already been signed and that the weapon could go on alert as soon as next year.

"After the first series of glide vehicles is produced and a controlling launch of a missile with this armament is carried out successfully, the Avangard complex may be accepted for service already in late 2018,” a defense source told the TASS news agency. “At the latest, it will be accepted for operation and placed on high alert in 2019."

Yuri Borisov, Russia’s deputy defense minister, had said earlier that the Russian Defense Ministry has already signed a contract to put the new weapon into production.

“The Avangard system that the president [Vladimir Putin] mentioned is well tested,” Borisov told the Russian language newspaper Red Star. “It came about through considerable effort, because temperatures on the surface of a combat unit reach up to 2000 degrees [Celsius]. It really does go through the air surrounded by plasma. Thus, the challenges involved in controlling and defending the system were considerable, but did eventually find resolution. Practical tests have confirmed the chosen approach’s feasibility. In fact, we have secured a contract for mass production of these systems. So this is no bluff, but a serious undertaking.”