How Barack Obama Goes to War (And Why It Matters) 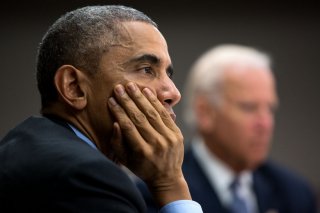 On September 16, 2014, there was a brief exchange regarding the nascent war against the self-declared Islamic State—totally unnoticed at the time—between the chairman of the Senate Armed Services Committee and the secretary of defense:

Sen. John McCain (R-AZ): We are now recruiting these young men to go and fight in Syria against ISIL [Islamic State], but if they’re attacked by Bashar Assad, we’re not gonna help them?

Secretary of Defense Chuck Hagel: They will defend themselves, Senator.

McCain: Will we help them against Assad’s air…

Hagel: We will help them and we will support them, as we have trained them.

McCain: How will we help them—will we repel Bashar Assad’s air assets that will be attacking them?

Hagel: Any attack on those that we have trained and who are supporting us, we will help ‘em.

Nine days later, then-Pentagon spokesperson Rear Adm. John Kirby further confirmed this policy position: “The secretary was clear in his testimony that, once we have trained opposition forces, should they come under attack, we would defend them.” Thus, this broad policy guidance—that the United States would “help” and “defend” any Syrian rebels that went through the Congressionally-mandated and Pentagon-directed train-and-equip program—was clear from the very beginning. However, the manner in which Obama administration officials refuse to publicly provide any further clarifying information about this highly consequential position reveals a lot about how it goes to war.

Every member of Congress or staffer who I spoke with in the past ten months was tremendously troubled by the lack of clarity about the U.S. commitment to these rebels and the likelihood that they would make a difference on the ground. Subsequently, on multiple occasions, policymakers appropriately pressed administration officials for further clarification of precisely when, how, and on what legal basis the United States would support and directly defend Pentagon-trained rebels. In short, they simply refused to provide an answer.

Starting with then-Secretary of Defense Hagel back in September: “We haven’t really done anything but come up with a concept.” Then, Secretary of State John Kerry in February: “Defending those who are engaged in the fight of ISIL, it seems to me, is an important part of defeating ISIL. But that’s a debate as to how that’s implemented that is taking place in the administration.” More recently, Secretary of Defense Ashton Carter passed when asked again: “We have an obligation….We’re going to have to decide exactly under what conditions and what way we’ll make that tactical decision when we introduce them.”

These non-answers are essential to keep in mind given Adam Entous’ reporting in yesterday’s Wall Street Journal. Weeks after the first small group of Pentagon-trained rebels were deployed back into northern Syria, the Obama administration has chosen to defend them against absolutely any force that attacks them. An unnamed senior military official is quoted as saying: “For offensive operations, it’s ISIS only. But if attacked, we’ll defend them against anyone who’s attacking them. We’re not looking to engage the regime, but we’ve made a commitment to help defend these people.” This truly significant decision, which more deeply commits U.S. credibility and military power to the outcome of the Syrian civil war, comes not from behind a White House or Pentagon podium, but rather from an anonymous official speaking to a reporter. This should have been declared publicly by President Obama or Secretary Carter, who should have then been willing to answer some of the clarifying questions that administration officials have refused to address in Congressional hearings.

A final point about the way that the Obama administration goes to war is that the legal basis for this policy decision is totally unclear. As noted, administration officials have been questioned about this multiple times by Congress and been told basically, “we will get back to you.” On March 3, when Congress was still going through the motions of debating an Authorization for the Use of Military Force (AUMF) against the Islamic State, Sen. Lindsey Graham (R-SC) asked Secretary Carter:

“Under the authorization to use military force, can we protect the people we train against an attack by Assad?…”

I’ve asked the White House general counsel this very question. And he told me very quickly, no. The AUMF would not allow the United States, to engage the air forces of Assad. That is not included within the authorization. So that to me is a very important point. Could you check with the White House and see where they come out on this at a later time?

Whether the White House ever provided an answer to this question is unknown, but it is now beside the point since Congress has still not authorized this latest open-ended war that began one year ago this week. Or, if there is a legal basis for which the Obama administration has made this latest policy decision to protect Pentagon-backed rebels from the Assad regime, it has never been stated publicly. Again, the White House or the Pentagon should immediately articulate this legal basis publicly, but given their pattern of behavior we certainly should not expect them to do so.