How to Beat Russia and China on the Battlefield: Military Robots 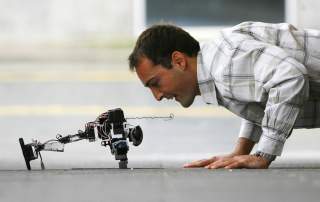 The implication of machine-speed electronic and cyberattacks on a robotic swarm’s data links suggests the need for individual platforms to understand context and carry on when disconnected. Too many Hollywood films have portrayed the consequences of too much centralization, networking, or EMP vulnerability on a robotic or networked force. The requirement for platforms, systems, organizations and individuals to understand context, make decisions, and act on these decisions independent of direct control from superior command elements.

The constituent robotic elements of the future Joint Force may be cut off electronically or through cyberattack, and not always have the capacity to reliably communicate with the rest of the force. Although individual units may be disrupted in this way, the robotic systems must not cease to operate or even simply return home when command guidance is lost. They must be able to stay in the fight. When future links cannot be established—forces must have a measure of autonomy and the capacity to operate independently until reconnected to the logistics and information structures of the remainder of the force. The future robotic force must think on its own and continue to pursue military objectives on a fast-moving battlefield.

Here, AI enabled systems will require the ability to independently sense and react to the environment. The future of command and control will be concerned with how to provide boundary conditions and guidance on the behavior of increasingly intelligent automated systems and platforms forces on the battlefield—including cyberspace.

The need for systems to think independently will also be driven by battlefield engagement and adaptation speeds that will far surpass the reaction times of human beings. The appearance of hypersonic missile systems, computer-driven electronic warfare capabilities, advancing cyber operations, and laser- and high-power microwave systems will all serve to accelerate the pace of military operations. The need to integrate sensor warfare, manage radio-frequency systems, and coordinate the array of effectors in drive the need for more automation, especially artificial intelligence for battle management purposes.

Let’s not be so quick to dismiss AI and robotic systems because of ethical and moral concerns that are, at best, premature. As capable as robotic and AI tools are, they remain just that—tools that are dependent on humans to employ and maintain them within rather narrow fields and in discrete operational conditions. Both are already far along in addressing difficult problems for the military, most of which are rather remote from terminator-like visions of human extinction. They require across the board human direction and support to work in the real world. Ignoring the promise of robotic and AI systems will not avoid a future of warfare in which the exquisite, scarce and dependent on continuous human direction are readily defeated. Victory in the future requires a force consisting of the many, small and smart. The United States and its Joint Force needs to get there first, and when it does, it needs to be aware of any advantages—and limitations—these new capabilities will provide.

Jeff Becker is the Chief Futurist supporting the Joint Concepts Division at the Joint Staff J-7 and their deep futures study, Joint Operating Environment 2035. The views here are his alone and do not necessarily reflect those of the Joint Staff or the Department of Defense.