How China Could Become a Two-Ocean Power (Thanks to Pakistan) 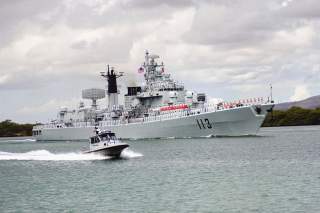 In the last few months Pakistan’s Government has made a number of decisions that have drawn the country even further into China’s geostrategic orbit. And although China and Pakistan have had a long and fruitful relationship for well over 50 years, it was the launch of the 2,900 km China–Pakistan Economic Corridor (CPEC) during a visit to Pakistan by Chinese President Xi Jinping in April that qualitatively changed the relationship. This $46 billion CPEC project, which involves the construction of roads, railroads and power plants over a 15-year period, comes on top of other previous important Pakistan–China agreements in the military, energy and infrastructure fields.

The geostrategic importance of CPEC is bolstered by some earlier bilateral agreements. First, in April China was granted 40-year operation rights to the port of Gwadar on the Indian Ocean, at the mouth of the Persian Gulf. Beijing is expected to invest $1.62 billion in Gwadar. Gwadar will be where the CPEC begins and eventually makes its way to Kashgar in western China. Eventually when the port is fully operational and CPEC is completed, China will be able to transship some of its oil needs from that port, thus saving billions and precious time and most importantly avoiding the potentially vulnerable Malacca Strait. Gwadar will play a critical part in China’s land and maritime silk routes, linking it to Central Asia and beyond. Importantly, while Gwadar is being built as a commercial port and not as a naval facility for China’s navy—at least for the time being, it could potentially be developed as one in the future. Such a development would certainly up the ante in Sino-Indian maritime competition in the Indian Ocean.

Another little-publicized aspect of the CPEC agreement, still apparently under negotiation, is Pakistan’s purchase of eight diesel-powered attack submarines which would be conventionally armed. This would be one of Pakistan’s biggest weapons purchases ever, at about $6 billion. Pakistan’s possession of such submarines would seriously complicate any Indian attempt to blockade Karachi or Gwadar. The sale would further entrench China as Pakistan’s principal arms provider. In 2010 alone, Pakistan was the destination for 60% of China’s total arms sales to the world.

China’s interest in deepening its involvement in Pakistan is nothing new. What has changed and has enabled the Chinese to intensify their focus on Pakistan, is the effective end of the West’s, and in particular the United States’, military operations in Afghanistan in 2015. Accordingly, NATO’s departure from Afghanistan has had two consequences: it has created a regional power vacuum and it has diminished America’s interest in Pakistan. And China has quickly jumped into the breach.

China has used this opportunity to bolster its long-term economic and strategic interests in Pakistan, the critical land bridge in the development of China’s Silk Road. Accordingly, the Chinese leaders have been willing to invest substantially in the development of Pakistan’s decrepit infrastructure, particularly in its roads and the energy sector. In absolute and relative terms, CPEC is huge compared to Washington’s last big economic package of $7.5 billion (2009–14). The completion of the CPEC would also enable China to link up with its significant economic interests in neighboring Afghanistan, particularly in copper and oil. Significantly, the first capital that the new president of Afghanistan visited was Beijing, not Washington, let alone New Delhi.

However, for China’s ambitious projects in Pakistan to come to fruition, the restive frontier area in western Pakistan, notably the provinces of Baluchistan and Khyber Pakhtunkhwa and the tribal areas, will need to be pacified. Chinese leaders have pressured Pakistan to ruthlessly pursue the Afghan Taliban and their fellow ideological travellers, including the Uighur militants of the al-Qaeda-linked separatist East Turkestan Islamic Movement (ETIM), who are hiding in those areas. ETIM fighters have launched raids into Xinjiang province from those lawless areas in the past. Accordingly, partly prompted by Beijing, the Pakistan military has been engaged in a year-long operation in North Waziristan hunting down the terrorists, including the members of the ETIM. Unfortunately, many of these have fled across the border into Afghanistan. China also recently hosted peace talks between the Taliban and the government of Afghanistan, with the Pakistan army intelligence present as well. Baluchistan also remains a serious problem for China, with Chinese workers having been killed by Baluch separatists in the past. In order to avoid such a reoccurrence, the Pakistan government will be assigning a division of Pakistan’s special security forces to protect Chinese workers in the future.

Notwithstanding the difficulties discussed above, if the CPEC does become a reality—and this is a big if—this would be very good news for Pakistan, as it would help address some of the country’s major developmental and economic issues. Put differently, it would prevent Pakistan from collapsing as a functioning state, a distinct possibility down the road and something China would not want to see happen given the knock-on effects this would have in the region. However, in geostrategic terms the success of CPEC would not be good news for the U.S.: it would displace the US as Pakistan’s major external patron in favor of China. Most importantly, it would provide China with a firm and reliable long-term beachhead in the Indian Ocean close to the Persian Gulf, effectively making China a two-ocean power. This would be a red rag to India. So no wonder India has been complaining loudly about the CPEC. But the even more important question for policymakers in Washington is how this mega-Chinese project will affect America’s own pivot to Asia in the longer-term.