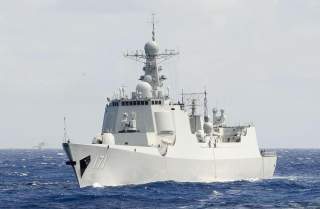 A storm is gathering in the South China Sea, and it seems inevitable there will be a showdown between China and the United States over this vital global trade route. But the conflict is not just about power—it’s about the ideas that the two nations see as the heart of the heart of the international system they wish to uphold.

China has frequently tested American presidents over what it can get away within this crucial waterway, and President Donald Trump will likely be on the receiving end of the same treatment. China continues to build island garrisons in what are considered international waters, and it is unclear whether the United States will take action to prevent this buildup. But China’s aggressive actions are more than just a rising nation flexing its strength. It is an open challenge to the American idea of free and open trading routes.

To understand why this conflict is such a crucial test for the United States, Americans should be mindful of one of the great, if almost entirely forgotten, conflicts of the seventeenth century. While British dominance on the high seas during the eighteenth and nineteenth centuries is more well known, few today remember when it was the Dutch, not the British, who had the world’s greatest maritime empire.

A tiny, continental European nation, the Netherlands rose to become a global hegemon in the seventeenth century through its ability to harness finance capitalism and free trade before their competitors. Their policy was guided by the doctrines of Hugo Grotius’s influential book Mare Liberum, whose title means “the free seas.” This was the belief that the world’s oceans belonged to all of humanity, owned by no single nation.

Grotius wrote that the oceans are the “common property of all” and that no sovereign has a right to “take” them for exclusive use.

And while this vast network of trade brought great prosperity to the Dutch and other nations, not everyone was happy with the lay of the land—or, rather, the sea.

The British, envious of their Dutch cousins and lagging their less populous neighbor in both sheer wealth and quality of life, sought to shake up the global order and leapfrog their rival. But continuing to enjoy the fruits of global trade seemed to leave the weaker British Empire always one or two steps behind the Dutch. They were tired of living in “the Dutch Century.”

So a British theorist, John Selden, created a rival theory to upend the frustrating notion of free seas. He called his book Mare Clausum, or “closed seas,” in open rebuke of Grotius. This theory held that a sovereign power could extend its territory to the oceans, and attacked the idea of free seas as metaphysical nonsense. Sovereignty extended to wherever a nation chose to park its ships or exert power, regardless of legal theories.

So the British set about to upend the vexatious Dutch trade dominance and began building a powerful navy. The British then went about passing a series of mercantilist “Navigation Acts” to restrict trade, and shut off chunks of the ocean to rivals.

British General George Monck put it simply: “The Dutch have too much trade, and the English are resolved to take it from them.”

The competing systems came to a head when a Dutch ship passing through English “sovereign” waters was asked to lower its flags in deference. The Dutch captain refused, sparking a massive naval battle in which the British stunningly came out victorious.

Historian Arthur Herman, author of To Rule the Waves: How the British Navy Shaped the Modern World, wrote, “The Dutch had had enough. Their navy had been ravaged and their best admiral killed. . . . The once bustling streets of Amsterdam were empty. Riots broke out in the nation’s seaports. Desperate, the once all-powerful republic sued for peace.”

The mighty Dutch Empire, once the undisputed world hegemon, went into swift decline, ceding the seas to its new British overlords. But as the British sealed their dominance in this system, they began to embrace Dutch-style free trade doctrines, as it was apparent no naval power could rival them. This is the system the United States inherited from the British at the close of World War II, and that has been more or less undisputed—until now.

China, like the British of the seventeenth century, has no intention of playing second fiddle to the United States under a “Pax Americana.” It is instead embracing Selden’s theories of closed seas, hemming in the South China Sea and making it sovereign territory. As the Heritage Foundation’s Steven Groves and Dean Cheng wrote, “Four hundred years after the publication of Mare Liberum, the Chinese government has claimed sovereign rights over the entire South China Sea.”

China wants American shipping vessels and warships, and those of its neighbors, to doff their flags in deference to Chinese sea power just as the British expected the Dutch to do. The challenge for the United States is in recognizing the threat and preventing the Chinese from tightening the noose on critical trade routes, potentially upending American naval and economic dominance.