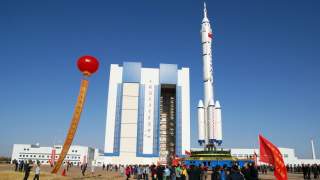 For many watchers of the Asia-Pacific, anti-access/area-denial (A2/AD) is the most serious challenge the U.S. faces in shaping its forces for the region. Anti-access/area-denial (A2/AD) is a Chinese strategy based around restricting enemy access to a certain strategic location, while it exerts forceful control over a territorial asset like Taiwan or a disputed maritime claim. It is designed to “deter, dissuade or defeat” the involvement of a third party in a confrontation or conflict over such issues, and is targeted at the United States or any of its Pacific allies that might intervene.

At the same time, the actual implementation of A2/AD is immensely complicated. Both China and the United States need to be careful in assessing what China can and cannot do, and what its strategic impact is in both the competition and risk of conflict between them.

A2/AD requires advanced intelligence, surveillance, and reconnaissance (ISR), as well as advanced targeting, communications, naval, air, missile defense, and cyber capabilities. China has spent a “generation” attempting to develop the technological capabilities necessary, and it still remains debatable if they are capable of A2/AD implementation. If China is to successfully develop A2/AD capability, it will owe much credit to its rapidly advancing space capability and satellite infrastructure.

At its simplest, A2/AD is centered on conventional counterforce targeting. In order to deny access, China must be able to execute a kill-chain starting with, “target detection and including munition delivery, weapon guidance, damage assessment, and potential restrike” of its opponent’s battleships, aircraft carriers, fighter jets, submarines, information hubs, and missile positions at long distances.

This requires significant tracking and C4ISR ability, much of which can only be provided by space-based assets. Further necessitating advanced space-based tracking capabilities is the fact that the Pacific Ocean is a massive battlefield. China has roughly 875,000 nautical square miles in its near seas area to monitor and control—expanding to another 1.5 million if the strategically important Philippine Sea becomes involved. Additionally, the seas lanes near China’s coast are some of worlds most trafficked by civilian ships making tracking and identification even more difficult.

China must also build the integrated system necessary for the substantial tracking needed for A2/AD. This requires, “high-quality real-time satellite imagery and target locating data and fusion, as well as of reliable indigenous satellite positioning, navigation, and timing (PNT)”. Accordingly, China has undergone a substantial expansion of its satellite program. In 2000, China possessed only 10 satellites, that number now stands at 181. For comparison, the United States and Russia have 576 and 140, respectively. China shows no signs of slowing down, having launched a Gaofen 3 satellite on August 10th, with a Chinese official noting, “Gaofen 3 will be very useful in safeguarding the country's maritime rights and interests”.

China has also now deployed satellites with an array of capabilities such as electro-optical (EO), synthetic aperture radar (SAR), and electronic reconnaissance (ELINT). Different satellites have various weaknesses like tracking during poor weather conditions, functioning at nighttime, and image quality. Thus, it is of paramount importance to maintain an array of satellite technology for tracking moving targets.

Next, China’s A2/AD strategy requires space capabilities for missile guidance. To this end China has spent years developing its own version of Global Positioning System (GPS) entitled Beidou. Currently, Beidou has 19 operational satellites and is deployed regionally by the PLA with plans to expand to worldwide coverage by 2020 following expansion to 35 total satellites.

Most missiles utilize some sort of GPS or similar technology for targeting. This is a lesson that China learned in a particularly shocking way during the 1995-1996 Taiwan Strait Crisis. In the midst of the crisis, China was “testing” missiles by launching them in the vicinity of Taiwan. However, in the midst of these tests the PLA was unable to track a number of the launched missiles.

This was attributed by the PLA to GPS interference—which is owned and run by the United States government. A retired Chinese colonel noted, “It was a great shame for the PLA ... an unforgettable humiliation. That's how we made up our mind to develop our own global [satellite] navigation and positioning system, no matter how huge the cost, Beidou is a must for us. We learned it the hard way.”

According to the Pentagon, China now possesses roughly 1,200 SRBMs and an additional 400 land-attack cruise missiles (LACMs). These potentially can hold targets in the first and second island chain—like US bases in Japan, Korea, and Guam—at risk. In an A2/AD situation, PLA strategists envision launching multi-axis salvos including an array of ballistic and cruise missiles in order to overpower and confuse the opposition’s missile defense. China’s massive missile and satellite proliferation are tied together as space capabilities are necessary to ensure the long-range precision capability of the advanced missiles.

China’s production of the DF-21D and DF-26, the world’s first anti-ship ballistic missiles (ASBM), were also developed with A2/AD in mind. The implications of ASBMs are so significant that it has even led to debates regarding the future efficacy of the aircraft carrier. The ability to legitimately threaten U.S. forward deployed aircraft carriers and battleships in the Pacific makes A2/AD look plausible.

However, ASBMs are not a new concept. In the 1970’s the Soviets invested substantial time and energy into an ASBM before failing due to problems regarding tracking and targeting. Indeed, Andrew S. Erickson notes regarding current Chinese capabilities, “C4ISR technologies probably still lag behind the requirement to identify and track a U.S. aircraft carrier in real time under wartime conditions.” These problems can be mitigated to some degree in a near seas situation with over-the-horizon radar, sea-based radar, and UAV ISR. However, effective space-based C4ISR capable of providing faster processing, more imagery, and data fusion is necessary for the ASBM to reach its full potential for targeting across the Asia-Pacific.

China plans not only to utilize it own space capabilities in an A2/AD scenario, it also plans to deny it opponent’s capability, with the goal of achieving “information superiority”. Due to the high level of reliance the US has placed on its space capabilities, PLA strategists see it as a weakness that can be exploited.

To this end, China has developed an array of anti-satellite weapons (ASATs) including: direct-ascent, co-orbital, directed-energy, and cyber ASAT weapons. This is particularly important because deterrence in space now lacks the equivalent of the  “strategic stability” that exists in nuclear deterrence.

There is broad concern that a successful first strike in space is likely to disproportionately favor the weaker party. Furthermore, a first strike could severely inhibit the attacked party’s ability to react to any form of asymmetric, conventional, or nuclear attack. The ability to respond to an attack is key to deterrence, and today, this ability is uncertain. This helps explain the PLA’s development and testing of ASAT weapons, and make it likely that the PLA envisions a scenario in which it launches a preemptive ASAT attack. This would potentially allow the PLA to take the initiative and establish information dominance in an A2/AD situation.

However, China’s ASAT capabilities and posture may be increasingly counterproductive as it becomes a space power in its own right. While there is asymmetrical value in launching a space strike first, it is unlikely that China could launch a fully disarming strike against U.S. space capabilities. The subsequent space war and destruction might fail to give China any advantage. Moreover, as General Hyten notes regarding destruction of space capabilities, “you go back to World War II. You go back to industrial age warfare.”

It is not clear from Chinese defense policy and studies that China recognizes this. They often ignore or understate the negatives of informationized warfare. As a result, with China’s plans to rely substantially on space infrastructure for A2/AD, engaging in space warfare with the US in all likelihood would be as strategically damaging to China as it would to the US.

Even so, China’s A2/AD capabilities and space expansion clearly have critical implications for the United States that challenge U.S. military orthodoxy in shaping both its force structure and strategy. In regards to force structure, the U.S. may be forced to reassess its decades-long overreliance on the aircraft carrier. Going forward, it may be prudent for the US to opt for stealthier and cheaper options that are not so susceptible to China’s long-range precision capabilities like attack submarines and battleships. Additionally, the US should look into acquiring more long-range bombers—as opposed to shorter-range aircraft like the F-35—that can undertake long distance missions to attack Chinese missile positions, information hubs, and terrestrial radar hubs that are key for A2/AD.