How to Deal with America’s China Problem: Target Beijing’s Vulnerabilities 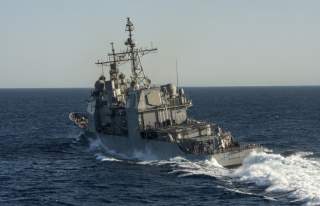 Recently completing a book manuscript assessing the status and outlook of U.S. relations within the broad Asia-Pacific region reinforced this writer’s opinion in an earlier article that the United States remains unsurpassed in regional influence and leadership. The Obama government’s nuanced and multifaceted rebalance initiatives mesh well with regional priorities and promise growing security, economic, and political ties. By contrast, China, the only other possible competitor for regional leadership, pursues conflicted policies at odds with key regional concerns of independence, sovereignty, and stability.

China’s recent unrelenting drive to use coercive and intimidating state power, short of direct application of military force, to advance control of disputed territory in the East China Sea and the South China Sea poses a major problem for the United States. The Chinese “salami slicing”, a term used to describe the accumulation of small changes that gradually change the strategic picture, undermines the credibility of U.S. alliances and U.S. standing as the region’s security guarantor. The Obama government has adopted a harder public line against China’s actions and has deepened security cooperation with allies and others threatened by Chinese provocations. These steps presumably pose some costs to China’s regional standing and its long-standing goal to reduce the US security presence around China’s periphery. Whatever the costs, they have not gotten the Chinese to stop.

Former Pacific Commander and Director of National Intelligence Dennis Blair, members of Congress responsible for national security matters, and a variety of other experienced observers urge the U.S. government to break out of the prevailing pattern of the U.S. reacting to Chinese provocations. They push the United States to take initiatives that would show China the serious costs for Beijing in its salami slicing strategy of the disputed East and South China Sea. In response, the Pacific Command is reportedly pursuing enhanced surveillance and monitoring of Chinese activities in disputed seas and possible consideration of shows of force and U.S. escorts of allied ships in disputed seas. How these and other measures will deter determined Chinese salami slicing is not at all clear, especially as it remains to be seen how strongly the Obama government will pursue such initiatives. Notably, such U.S. actions risk possible confrontation with Chinese forces at a time of serious troubles in U.S. foreign relations with Russia and protracted problems in Ukraine, and throughout the Middle East and Southwestern Asia.

Against this background, this writer judges that Chinese advances, and subsequent negative consequences on U.S. interests, have reached a point where careful consideration needs to be given to options that focus on the many weaknesses and vulnerabilities China faces in dealing with the United States. The thinking in congressional deliberations is that China’s use of coercive measures, short of military force, targets U.S. weakness in dealing with such technically non-military threats. The United States should do likewise, targeting Chinese weaknesses and vulnerabilities, which are more than those of the United States.

Most of these options can be implemented easily by U.S. policymakers and are within U.S. budget constraints. In most cases, the options can and probably should be employed without heavy publicity, strong rhetoric, direct arguments, or public confrontation with China.

Rather, Washington should continue to pursue its close engagement with China and leave it to China to react to the U.S. initiatives which will show China’s leaders the kinds of costs and risks they run if Beijing insists on pursuing policies that undermine the US position in the Asia-Pacific. Such an approach is similar to China’s recent record of pursuing expansionist policies in the disputed seas as well as economic and trade, nuclear non-proliferation, and human rights policies with profound negative implications for the United States while still seeking the positive goal of a so-called new great power relationship in US-China relations. The United States can do the same by mixing negatives and positives in U.S.-China relations.

Meanwhile, options raised in congressional hearings often do not reflect the full policy awareness and knowledge of current, and sometimes hidden, circumstances that only the U.S.executive branch experts can provide. Nonetheless, their importance will grow if China, as expected, is undeterred by prevailing US policies.

The options include the following:

1)     US attack and missile submarines go undetected by weak Chinese anti-submarine warfare capabilities and possess the firepower to annihilate any advancing Chinese forces in the disputed East China Seas and South China Sea. The surfacing of US attack submarines near disputed areas of the East and South China Seas, perhaps in conjunction with Japanese and Australian submarines, would remind China of its serious anti-submarine limitations. In response, Beijing will doubtless seek to fix the problem. Yet to remedy China’s anti-submarine warfare limitations will require prolonged and large-scale costs and diverted resources for Chinese military planners and Chinese leaders juggling budget priorities in the period of wide-ranging and difficult change in Chinese development and governance. In sum, the solution will also incur major costs for China.

2)     Taiwan is an area of acute sensitivity for China; one where the United States has several options to raise significant costs for China. As the United States seeks to check China’s recent coercion and intimidation of neighbors, it could devote more attention to Taiwan – which has faced unbridled Chinese military coercion and intimidation for almost two decades. One option is to complicate Chinese defense plans and overall strategy toward Taiwan by allowing the sale of the 66 F-16 fighter jet long sought by the Taiwan government. The cost to China of such action involves not just the planes themselves but the significance of the substantial US demonstration of support for Taiwan in the face of China’s pressure and threats. Another option would involve a more active U.S. posture in support of Taiwanese free expression and identity represented by the so-called Sunflower Movement on the island. Beijing has shown no postive response to the rising importance of such demonstrations of Taiwan identity at odds with Chinese interests. The demonstrations tend to support Taiwan’s political opposition’s wariness on dealing with China. U.S. support for such expressions of Taiwanese identity could further shift Taiwan politics in favor of the opposition against the unpopular government of President Ma Ying-jeou. China would face costly and difficult reevaluation of its reasonably successful policy toward Taiwan, should the opposition win the 2016 presidential election.

3)     Recent demonstrations in Hong Kong – another very sensitive area for China's leadership – also foreshadow a possibly costly and delicate policy reevaluation for China. The United States could easily add to the salience of the demonstrations and the related costs for China by adopting a higher profile in support for free expression in Hong Kong.

4)     The main external reason why the North Korean problem continues to threaten the Asia-Pacific region is continued Chinese support for the brutal regime. Official U.S. rhetoric could focus more on this fact. This could add considerable weight to the reputational costs China faces as a result of its expansionism in disputed areas of the East and South China Seas, perhaps tipping the scales and compelling China to alter its practices.

5)     The United States could demonstrate a concrete response to China’s practice or to deploying conventionally armed Chinese ballistic missiles targeted at U.S. bases and forces in the Asia-Pacific over the past 20 years. These missiles are a direct threat to U.S. service personnel and US allies. The US response could involve conventionally armed multi-warhead U.S. ballistic missiles deployed in the United States or in the region in attack and ballistic missile submarines. These missiles would be ready to rapidly respond with multiple warheads were China to launch its missiles against U.S. forces. Because of China’s weak ballistic missile defense capabilities, Beijing would face an enormous cost in dealing with the new risk to its leadership and strategic structure posed by these U.S. warheads.

This writer’s book shows that China’s recent assertiveness in disputed territory is a serious problem for the United States but not (yet) a fundamental challenge to continued U.S. leadership in the Asia-Pacific. Thus, the options listed above and others like them, focused on Chinese vulnerabilities should be used carefully and in proportion to the threat in proportion to the threat Chinese actions pose to U.S. interests. Nevertheless, the bottom line is that the threat to U.S. interests has now reached a point where the above options – and others – warrant serious consideration.

Robert Sutter is a professor at George Washington University. This article first appeared in CSIS:PACNET here.