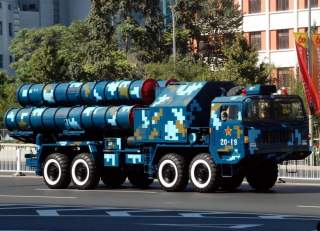 Ground-based air defense forces, particularly surface-to-air missile (SAM) forces, play a crucial role in Chinese military thinking about the defense of the homeland. In Science of Military Strategy 2013, Chinese strategists assume that a potential adversary is likely to initiate a conflict via air attacks that continue throughout the conflict and directly impact the success or failure of the overall attack. Looking beyond China’s borders to recent wars abroad, other Chinese strategists have observed that, without a strong air defense capability, a country’s national security and territorial integrity are held at risk and the country may lose operational superiority during wartime, leading to irreparable losses within its territory. A strong air defense capability can thus help China defeat enemy air assaults, win air defense battles, and deter potential adversaries.

PLAAF SAM units’ operational readiness and capabilities may vary depending on their home unit location and the time of year. According to our latest research, which examined every SAM training activity discussed within a one-year time frame between 2013 and 2014 in the PLAAF’s official newspaper, Kongjun Bao, SAM units based near the capital area and in the coastal regions appeared to be the most active. We also found that PLAAF SAM units followed a yearly training cycle that is based on the training cycle of two-year enlisted conscripts (which begins in late summer and early fall). This cycle impacts SAM units’ levels of operational readiness throughout the year. For example, between October and February, we found no exercises—the most sophisticated level of training activity—and only a few basic training activities or drills reported. By April, there were higher levels of basic training activities and the highest number of drills, presumably in preparation for Red Sword, the PLAAF’s flagship opposition-force exercise. Training peaked in July and high levels of activity were maintained during the summer and early fall.

PLAAF SAM units have been engaging in more realistic and challenging combat training in recent years. Mobility training was the most frequently mentioned in the 2013 to 2014 data set, the majority of which involved rapid maneuver, though some articles discussed traveling long distances to engage in live-fire training at one of two SAM training ranges in the Gobi Desert or Bohai Gulf or to train in unfamiliar environments. Opposition-force training was also frequently discussed, though only a fraction of this training was described as against actual aviation units as opposed to simulated opponents.

Compared to an earlier data set from 2004 to 2006, 2013 to 2014 data showed increases in the discussion of opposition-force and unscripted training in PLAAF SAM training activities. However, discussion of complex training content is still limited, with just over 10 percent of entries describing unscripted training, and even fewer involving combined arms training with other PLAAF branches or joint training with other services.

Opposition-force training has grown more frequent in recent years. For some SAM units, Kongjun Bao articles indicate that training with neighboring aviation units has become more common, with commanders and operators from both types of units sharing information about their combat methods and devising ways to overcome them. In live-unit opposition-force training, PLAAF SAM units also are increasingly challenging their opponents instead of merely “supporting” the other side’s training. In their training against aviation forces, SAMs are now practicing to counter sophisticated air tactics, and SAM units are operating as part of blue force and red forces.

Modest growth has also occurred in the quantity of unscripted training discussed, though some of the weaknesses identified in unscripted activities appear to be relatively basic. For example, one July 7, 2014 Kongjun Bao article describes a SAM battalion that was unable to follow an unexpected order to quickly unload its equipment off of a train and arrive at a designated location within 30 minutes. This was because the unit had hastily packed its equipment and troops could not remember where they had placed each component.

Despite engaging in substantial nighttime and mobility training, logistics problems and concerns about safety and injures appear to influence SAM units’ training to move to designated locations and be combat ready upon arrival. In spite of these concerns, however, units appear to be introducing more complexity into their night training. PLAAF SAM units routinely practice nighttime equipment assembly and tear down, as well as nighttime long distance and rapid mobility with SAM equipment. This training facilitates their ability to relocate at night without detection by electro-optical sensors.

There also is limited joint and combined-arms training, but ground-based air defense forces appear to be moving beyond simple altitude de-confliction toward sharing data, employing more sophisticated target identification methods, and coordinating firepower with aviation units. However, there is little to suggest that the PLAAF has made significant progress toward operating fighter interceptors and SAMs in the same airspace—a Joint Engagement Zone. Reports on SAM training did not discuss practicing to identify friend or foe or aircraft flying through certain corridors in a Missile Engagement Zone.

Looking forward, PLAAF SAMs are likely to continue to engage in more difficult and sophisticated training, including unscripted training against aviation opponents and conducting complex operations at night. PLAAF SAMs are also likely to train more closely with PLA Army air defense units as the two services work on their ability to operate jointly. Future research in these areas could make a valuable contribution to understanding developments in PLAAF capabilities.

Cristina Garafola is a project associate at the nonprofit, nonpartisan RAND Corporation.