How to Fight a War With a Quantum Computer 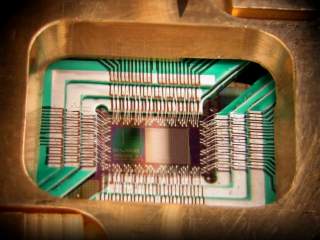 The Australian Government recently announced plans to invest $26 million in the development of quantum computing technology as part of the National Innovation and Science Agenda (NISA). Prime Minister Turnbull has argued that NISA is part of a new “ideas boom” designed to “create a modern, dynamic and 21st century economy for Australia.” It emphasizes quantum computing as an important area for government investment based on its ability to produce “jobs and economic growth.” And while this industry could certainly be “worth billions,” it offers much more than financial prosperity: quantum technologies could play a significant role in our future defense and security.

Quantum technology harnesses the obscure properties of subatomic matter to achieve computing processes unobtainable with classic computers. Today’s computers run on binary digits, or bits, which exist as either 1s or 0s. In contrast, quantum bits, or qubits, exploit the bizarre principle of superposition that enables them to occupy all possible states (both 1 and 0) at the same time. This allows quantum computers to undertake multiple calculations in parallel, unlocking unprecedented processing power that could “solve problems that would take conventional computers centuries.”

Another important quantum quality, entanglement, means two qubits can become inextricably linked, such that a change in one causes a change in the other. The qubits can remain connected even when separated across large distances. This delicate connection can be used for instantaneous communication, and its vulnerability to interference means the act of eavesdropping fundamentally alters the transmission, rendering it provably secure.

NISA asserts that those technological tricks will have a “transformational impact on Australian and global businesses” but fails to mention the revolutionary role they could play in improving Australia’s defense force in three key areas.

The ability of quantum computers to undertake multiple calculations at once makes them an enormous asset for the optimization of defense logistics. A quantum computer could examine all possible strategies and quickly identify the most rapid or low-energy solution, in order to determine the military’s preferable travel path, which is likely to increase the efficiency and speed of military operations.

Increasingly complex weapons systems also rely on ever-growing volumes of activation software. For example, the F-35 Joint Strike Fighter now requires more than twenty million lines of code to be fully operational. The brute force of quantum computers could offer a strategic advantage by improving the efficiency of code validation where defense assets are deployed in time-sensitive scenarios.

Quantum computers are most infamous for their potential to decrypt communications and other data. Current encryption models rely on the limited computing power available to hackers (both state and non-state) and the unreasonable amount of time required to solve long encryption keys. However, the immense processing power of quantum computers will be able to solve those previously impossible problems in little to no time, eventually rendering the majority of the world’s information security frameworks completely useless. The ability to hack an adversary’s (previously secret) communications would provide a government with access to incredibly sensitive intelligence and a decisive strategic advantage.

The accuracy of a military’s positioning, navigation and timing intelligence could also be improved through the precision of quantum sensor technologies. The old and expensive Global Positioning System (GPS) is increasingly unreliable and vulnerable to denial and sabotage. However, quantum location technologies are expected to be near impossible to jam and “1,000 times more accurate” than today’s systems.

While the advent of quantum computing may mean “some widespread and crucial encryption methods will be rendered obsolete,” quantum technology also promises a whole new generation of secure communication. The quantum property of entanglement makes Quantum Key Distribution possible, providing the basis of an “un-hackable” encryption model that’s “impervious to eavesdroppers,” even quantum computers. With quantum computers potentially ushering in a cryptopocalypse, investing in enduring information security is a sensible insurance policy.

In light of these strategic applications, it’s not only the familiar tech giants such as Intel, IBM, Microsoft and Google racing to harness the power of quantum mechanics, governments worldwide are investing in this area to maintain or obtain strategic advantage.

The U.S. Defense Undersecretary Frank Kendall recently stated that “quantum science is an area that could yield fundamental changes in military capabilities.” As such, the U.S. Army, Navy and Air Force are working together with a $45 million grant to establish a secure long-distance quantum communication network “for the war-fighter.”

Quantum science also “figures centrally in the objectives of the Chinese military,” with the technology having been a focus of the National University of Defense Technology and the People’s Liberation Army’s University of Science and Technology for several years now. In fact, a Chinese project is underway to establish the longest quantum communication network in the world, stretching 2,000km between Shanghai and Beijing and including the world’s first quantum-enabled satellite.

The UK’s National Strategy for Quantum Computing argues that quantum technologies will have a major impact on the defense industry, and the Defence Science and Technology Laboratory was already showcasing new quantum navigation technologies early last year.

The good news is that Australia’s quantum technology research is world leading. The Centre for Quantum Computing and Communications (CQC2T), recipient of the NISA grant, recently made breakthrough proof of concept for silicon quantum computing. In fact, lead scientist Michelle Simmons expects the centre to develop a scalable quantum computer within the next five years. The government’s recent investment is a great step in ensuring Australia’s continued efforts in this field.

There’s no doubt this industry promises enormous economic benefits. However, we mustn’t become complacent by thinking about quantum technology in purely economic terms. It’s also an essential national investment in the context of an international race to quantum pre-eminence and the strategic advantage it’s likely to afford. The Australian government must continue to invest in this technology, while broadening its view to see the many benefits that quantum research and innovation brings to our national defense and security.

Zoe Hawkins is a research intern at ASPI. This article first appeared in the Strategist.