How Germany's Merkel Can Lead the West 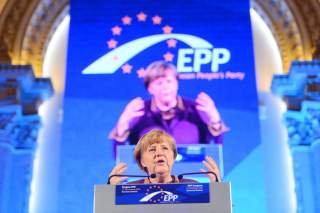 Donald Trump’s presidential election was a shot heard around the world. Dictators cheered the defeat of Hillary Clinton, and democracies—in particular American allies—grew gravely concerned. The entire liberal international order now appears to be at risk, with nativism and populism still on the march. Although conventional wisdom suggests the East is rising and the West is fading, now with more pivotal elections approaching Western allies are turning their eyes to Germany. Ironically, Trump’s awkward summit with Chancellor Angela Merkel actually makes it more likely the Germans will take on the mantle of global leadership.

As the Clinton campaign grew confident of victory last October, her Europe advisers determined in their last meeting that her first trip abroad would be to Brussels for a joint summit with the European Union and NATO. The theme was to be that of democracy, specifically the West standing together and united for democracy, and against those such as Russia who seek to subvert it. They discussed having President Clinton engage Prime Minister May in a pull-aside meeting on the summit margins, with the former informing the latter that the United States does not want the United Kingdom to go through with Brexit, and that she would help her special relationship colleague to climb down from her perilous perch.

However, with Donald Trump at the helm instead, whose first meeting with a foreign leader was none other than the United Kingdom’s UK Independence Party leader Nigel Farage, none of this is likely to come to pass. Instead, the new president has become a cheerleader for Brexit, a critic of the EU, and a skeptic about NATO, a telling exemplification of what the German government views as his being among the least strategically adept president in American history—as well as one of the most undiplomatic. Chancellor Merkel had her work cut out for her.

Merkel had prepared in great depth for her first meeting with Trump, which was always going to be a delicate matter in light of Trump’s bracing criticism of her and Germany in recent months. Trump’s interview with the German newspaper Bild was a case in point. With little regard for how his views would be received by his German counterpart, he criticized Merkel and the German automobile industry. The reaction from her and top German officials was swift, including Merkel scolding Trump publicly.

By all accounts it was an awkward summit meeting. Trump pressed Merkel in their private meeting on trade and spending on NATO, and she politely but firmly held her ground. Their public appearances were telling. In the traditional live photo op in the Oval Office, Merkel asked Trump if they should shake hands, but he demurred in looking stiffly straight ahead at the press gaggle. Then came his infamous attempt to joke about both of them being the subject of Obama administration surveillance, which fell flat and received a mildly uneasy reaction from Merkel. Back in Germany the press coverage was caustic. And then Trump doubled down in a tweet demanding that Germany pay back the United States for America’s outsized contribution to the NATO budget (failing to understand how NATO even works in the process).

Compared to his summit meetings with Britain’s Theresa May and Japan’s Shinzo Abe, Trump’s tête-à-tête with Merkel was a minor disaster. Nonetheless, it is likely to have a salutary effect. The patriotic reaction in Germany to the public’s view that Trump treated Merkel poorly will only make it more likely that Germany will continue to transition toward becoming the leader of Europe and the wider world as well—certainly of the transatlantic alliance, as well as the world’s governments who remain committed to the liberal international order.

Already the much-touted Trump effect in Europe has been negated in the Netherlands, where the far-right party of “Dutch Trump” Geert Wilders fell far short of the wider populist right’s expectations in an election where pro-EU parties achieved an overall sizable majority. The Dutch electorate is often a bellwether for outcomes elsewhere in Europe. Indeed, a reverse Trump effect is now discernible between the shutout of Wilders’s party and the sizable recent slide in opinion polls for the far right Alternative for Germany party. The French electorate also demonstrates a trend of flirting with extreme candidates in the first round of president elections in France, while consistently handing more moderate candidates clear victories in the second round.

In fact, it would be hard to find three more ideal European countries to be holding elections right at this juncture, for the Dutch-French-German populations are among the most participatory on the continent—e.g., 80 percent of Dutch citizens voted in last week’s election. More importantly, the populations of this triumvirate are highly educated and starkly aware of the implications of this nascent nativist political shift across the West. Moreover, they have the advantage of being able to observe the consequences of the U.S. and UK votes and their populist outcomes in full.

Certainly, Russia is making a massive attempt to influence their election outcomes. However, fake news and Russian hacking work best when a country’s leaders and public are not used to such interference, as was the case in the United States. Europe, however, is well aware of the threat and has already been working to thwart it over the last couple of years. The electorates and leaders of Germany, France the Netherlands and their continental European counterparts are effectively erecting a wall against the further surge to the far right in Europe.

This is particularly the case in Germany, as average Germans by and large are unlikely to believe fake news or allow info dumps from hacking to change their views. With a history involving a telling turn last century first for fascism and then for communism, the German people are more impervious to such interference. They have been watching closely as events unfold, including Trump’s boorish behavior toward Merkel. Polls show that Germans are the least likely in all of Europe to vote for “a strong leader.” Ultimately, with so much at stake they are not going to allow Merkel to be defeated.

At the same time, on both sides of the Atlantic we are gradually learning not to take the things Mr. Trump says at full face value. He often says things to get a rise out of people but doesn't intend to follow through with those words, and he regularly contradicts himself to no effect. Even while treating Merkel shabbily, Trump underscored a full U.S. commitment to NATO, the same commitment that was made by cabinet officials to a string of visiting German cabinet ministers in the last two months. Even after those verbal reassurances, German leaders maintained that they wanted to hear from President Trump himself.

Of far greater consequence is the recently arrived U.S. armored division, which symbolically arrived in Germany before its troops and equipment moved on to Poland. They are not going to be taken out—except in rotational terms—which would be far too difficult not only logistically, but all the more so in terms of the strong wall of support for this among Trump’s cabinet officials and Republicans in Congress, as well as public opinion. This should be the be sign of reassurance that Germany and Europe focus on at this critical juncture, as opposed to Trump's off-the-cuff manner of speaking and tweeting.

Nonetheless, with Trump’s accession to the presidency the United States appears to be following the United Kingdom’s lead down the merry path of nativism, a move that has called into question American leadership looking forward. The special relationship between the United States and Great Britain will likely be among the first casualties of the Trump era, for the United Kingdom is on the verge of administering a massive self-inflicted wound—one that will end its role as the standout of the world’s midrange powers.

Prime Minister May talked up the special relationship in her visit to the United States, and President Trump responded in kind. However, by losing a prospective $1 billion of military purchasing power, and with Her Majesty’s Treasury estimating that British GDP reduction within two years of Brexit will be twice as large compared to remaining in the EU’s single market, the United Kingdom will be unable to meet its NATO commitments. Additionally, it is unlikely that the country would be a reliable contributor to key Western interventions like those in Syria, Iraq and Libya.

The French, by comparison, will retain impressive diplomatic and military capabilities, but French leadership also has been called into question. With President Hollande weak, unpopular, soon to leave office and soon to be replaced by Marine Le Pen or Emmanuel Macron, it appears that France will be unlikely to replace the United Kingdom. The Trump administration will learn soon enough that its most reliable Western partner is going to be Germany given that no country is likely to willingly enter a special relationship with an America led by Donald Trump.

Chancellor Merkel is the great Western leader left standing, and the world has begun looking to her not only to remain in office, but to lead the West and hold the line against resurgent nationalist, Russian and terrorist forces. It is a tall task for any leader at such a pivotal juncture in world history. Alas, it is welcome news that Merkel is standing again in Germany’s upcoming election. Thus, as the weight of the world has begun to rest—at least in part—on her and Germany’s shoulders, the question on the mind of those around the globe who are still seeking to uphold the liberal international order is whether she and Germany are up to bearing a portion of this great burden.