How Japan Could Sink China's Navy in a War: Ramjet Missiles 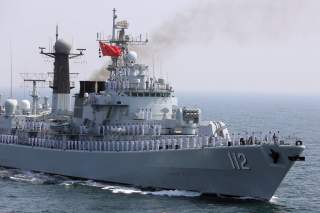 A new anti-ship missile promises to give a tremendous boost to the Japan Self Defense Force's ability to deter naval aggression. The missile, known as XASM-3, can travel at speeds of Mach 3, evading missile defenses to sink enemy surface ships. The missiles will be a significant worry for China, whose navy will have to sail within range of the missiles in order to reach the North Pacific Ocean.

Traditional anti-ship missiles such as the U.S.-made Harpoon and French Exocet use rocket motors and turbojet engines to fly at subsonic speeds. The missiles are collectively known as “sea skimmers” due to their ability to fly as little as fifteen feet above the waves. The advantage to this low altitude flight is that incoming missiles are hidden from targets by the curvature of the earth. The lower a missile flies, the shorter the detection range. A radar sixty feet off the ground can detect a sea skimming missile flying at thirty feet at a range of nineteen miles. Assuming a Harpoon missile flies at a height of ten meters, enemy air defenses will pick it up on their radars only in the last two minutes of flight, giving them little time to react.

The use of subsonic sea skimmers was the status quo in the West until recently. Although new technologies had been developed such as the Soviet ramjet-powered P-270 Moskit missile, the Cold War ended before the United States, NATO and other allied nations could catch up. The lack of an enemy fleet during the 1990s further stalled missile development, and the emphasis on land warfare starting in 2001 meant that older missiles such as Harpoon soldiered on without a replacement in sight.

One country, however, maintained its emphasis on naval warfare. It observed a neighbor—and traditional adversary—quickly improve the quality and quantity of its navy, building scores of frigates and destroyers, its first landing platform dock amphibious ships and begin work on a fleet of aircraft carriers. That country was Japan, which has quietly watched as the People’s Liberation Army Navy (PLAN) has gone from a green water navy capable of operating only in regional seas relatively close to home to a full-fledged blue water fleet operating as far as the Indian Ocean and Baltic Sea. The PLAN is now considerably larger than the Japan’s Maritime Self Defense Force in both overall tonnage and number of ships.

Under development since the mid-2000s, the new XASM-3 anti-ship missile promises to go a long way toward redirecting the balance of power back to Japan. Like the Moskit, XASM-3 is powered by a ramjet and has a maximum speed in excess of Mach 3. Like anti-ship missiles before it, XASM-3 also flies at just above the wavetops. The combination of the two means any ship unlucky enough to be on the receiving end would have less than thirty seconds from detection to impact to act.

According to Navy Recognition, XASM-3 is a ramjet rocket powered engine a range of ninety-two miles—and very likely more. The missile is seventeen feet long with a weight of nearly two thousand pounds, making it smaller than the U.S. Navy’s Tomahawk land attack missile and SM-6 air defense interceptor. XASM-3 reportedly has with inertial/GPS navigation switching over to an passive or active seeker in the terminal phase. The Air Self Defense Forces’ F-2 multi-role fighter will carry up to two of the missiles. Production of the missiles is set to start next year in 2018.

At the same time, the Maritime Self Defense Forces are reportedly gaining a new missile, the XSSM. The new missile will outfit Japanese warships and the missile appears to be a good fit for the Mark 41 vertical launch system. This will allow Japanese destroyers, which previously carried two to eight anti-ship missiles externally in box launchers, to carry XSSM missiles in the Mark 41s instead. This will translates into greatly improved anti-ship firepower, as even older Takanami-class destroyers have thirty-two Mark 41s and the Kongo Aegis destroyers have ninety silos. A third basing mode for the XASM/XSSM appears likely: like many countries, Japan still maintains land-based anti-ship missiles, a one time seeming anachronism that now appears more relevant than ever.

China now regularly sends surface task forces through Japan’s Ryukyu Islands chain, stretching from the southern Japanese island of Kyushu to Taiwan. This is not necessarily an inflammatory gesture: China’s Northern and Eastern Theater Navies must transit the Ryukyus to head to the open Pacific Ocean, or take the long way around Taiwan instead. In peacetime the PLAN, although traveling through Japan’s Exclusive Economic Zone, can invoke the right of innocent passage to legally pass through.

The geographic distribution of the Ryukyu Islands, coupled with a land-based anti-ship missile with a ninety-two-mile range, will spell serious trouble for the PLAN if it tried to force its way through in wartime. Truck-mounted anti-ship missile batteries batteries on most of the inhabited islands—from the southernmost island of Yonaguni, farther north to Ishigakijima, Miyakojima, Okinawa, Tokunoshima and finally Amamishima—would form a continuous, overlapping barrier of anti-ship missiles impossible to escape. Land-based missiles would also serve to shape the battle: as the PLAN traveled north or south to avoid the “Ryukuan Gauntlet”, they could run into Japan’s excellent Soryu-class diesel electric attack submarines, Hayabusa-class guided missile patrol boats or F-2 fighters armed with the XASM-3.

The development of more capable anti-ship missiles will go a long way toward redressing the imbalance of forces between Japan and China, and making Japanese littoral waters an unattractive place to be in wartime without building a single new ship. The formidable nature of these missiles throws a bucket of cold water poured on any notions that Japan could be intimidated—or beaten—at sea. The only escape from these missiles will be to avoid war.

Image: Chinese servicemen gesture from the deck of a naval vessel, during the closing ceremony of the Pakistan Navy’s Multinational Exercise AMAN-17, in the North Arabian Sea, Pakistan, February 14, 2017. REUTERS/Akhtar Soomro​