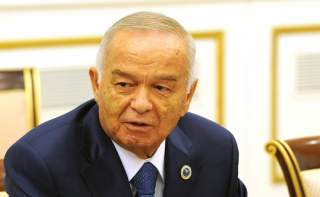 Islam Karimov, the leader of Uzbekistan since 1989, has officially been pronounced dead, ending a days-long Schrödinger dilemma. The ensuing power vacuum and leadership scramble will lay bare the true nature of the indeterminate Russia-China nexus.

Between the coup attempt in Turkey, Chinese embassy bombing in Kyrgyzstan and Europe “going down the drain,” much has been whispered about the rise of autocratic Eurasia and the decline of the democratic West. Beijing and Moscow, the thinking goes, are working together to systematically challenge the dominance of Washington and its allies. A few recent developments have stoked speculation over this alleged anti-Democratic alliance: the Russian use of Iranian airbases to bomb Syrian rebels, murmurs that Turkey may host Russian jets and Kremlin news outlets boasting of a coming Russian-Chinese military alignment.

Moscow’s military muscle in Central Asia is significant, but so is Beijing’s economic clout. In the wake of Karimov’s passing, China may very well assert itself in Uzbekistan, in spite of Russian preferences. Or perhaps, the Beijing and Moscow will overcome their differences, stick it to Washington and use their great-power influence to resolve the Uzbek transfer of power to their own benefit. Uzbekistan’s transition could serve as a litmus test for the practical utility of a supposed Russia-China cabal.

Washington will fume about Karimov’s atrocious legacy—the killing of protesters, the disappearing of dissidents and the delivery of their corpses to their families—but change is not on the horizon. Many will pressure the White House to intervene under the banner of human-rights defender. But the United States should resist that urge and, for the time being, play the role of passive observer. Lecturing Beijing and Moscow will only harden their stances.

Russia has, more or less, dominated Central Asia for at least the last century and a half. Islam Karimov was appointed leader of Uzbekistan in the late Soviet period. After the collapse of the USSR, Moscow has sought to continue projecting itself into Central Asia. Whatever its motives—creating a buffer zone between it and a rising China, the prestige of maintaining a “sphere of influence” or legitimate concerns about radical Islam—Russia will remain a key player in the region.

While the United States has made half-hearted attempts to build relationships in Central Asia, China is the only credible alternative to Russia. Considering Beijing’s policy orientation—Central Asia is critical to its One Belt, One Road concept—its influence in these former Soviet states will likely grow ten-fold. In economic terms, this has already happened. Turkmen oil and gas flow in abundance to China, crossing through Kazakhstan and Uzbekistan in the process. With significant portions of its energy needs tied to Central Asia, Beijing dreads regional instability. Russia and China, evidently, have more skin in the game than Washington.

It would be sensible and prudent for China and Russia to use Karimov’s death as an opportunity to solidify ties. The two nations have gone to great lengths to showcase their friendship in recent years. Only two months ago, President Xi Jinping reiterated that the countries were “Friends Forever.” But the budding love affair is far from straightforward. After the sanctions over Crimea, Chinese investment in Russia fell short, disappointing Kremlin officials who expected Beijing to help defray its losses. Which brings us to a larger point: Russia and China have been in lockstep on every issue; often China pursues its own interests at the expense of Russia. The two nations, for instance, signed a cyber nonaggression deal last year, only to have Chinese cyber attacks on Russia increase nearly threefold in the last year. Regardless, the two are planning a show of solidarity in the South China Sea through joint naval exercises this year.

Despite an erratic ebb and flow in bilateral tensions, China and Russia will likely work together to ensure Uzbekistan’s stability. With the Islamic State still festering in Iraq, Syria and beyond, a new caliphate appearing in Central Asia would be to the disadvantage of all. The leaders of Central Asia are keen to use the threat of ISIS as a tool to strengthen their grip on power; Moscow and Beijing will likely use the same tactic to crush dissent and maintain order. Ensuring Central Asia remains stable may help create a common sense of purpose and align the national priorities of both China and Russia. The United States would be wise to closely monitor Uzbekistan.