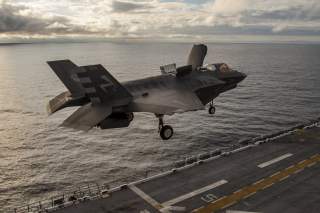 Remember when following the F-35 Joint Strike Fighter (JSF) program was like watching one of those dark dramatic series produced by HBO or FX? Problems with the aircraft, its engines and major systems seemed to pop up on a daily basis. The software was behind schedule, testing was not being performed at the proper pace and the program needed more time and money. There was even that awful period from 2011 to 2013 when the short take-off-and-landing variant built primarily for the Marine Corps, the F-35B, was placed on probation by then-Secretary of Defense Robert Gates.

Fast forward a few years and the Joint Strike Fighter program has become boringly successful. Both the U.S. Marine Corps and Air Force have declared initial operating capability. Equally important, both have a sufficient number of aircraft to do the development of operational concepts and tactics. Members of the International Consortium are receiving their first aircraft and several nations are actively investing in supporting infrastructure.

Even recent challenges now proceed in a predictable manner with no serious impact on the overall program. In 2014 there was a catastrophic engine fire caused by the failure of a seal due to excessive fan blade wear. The engine manufacturer, Pratt & Whitney, responded rapidly with a full investigation and root cause analysis.  An interim fix was identified for the existing F-35 fleet and a permanent solution designed and implemented first for new engines. Then there was substandard insulation in electric lines that grounded some 15 aircraft just this past September. It turned out to be a problem with one supplier and a particular batch of product that was quickly fixed.  Several of the affected JSF’s are already back flying. The biggest problem is getting the F-35’s gun to fire with sufficient accuracy.

The latest problem, stemming from the Imperial Office of Test and Evaluation (OT&E), is the announcement that the program will need an additional $550 million to complete development. Has there been a failure of a critical part? Does the software not work? Nothing of the kind. According to OT&E the additional funds are required to complete the full set of some 8,000 test points mandated by that organization. Think of it as a tax on the program to ensure the full employment of testers.

There are no show stoppers remaining in the F-35 program, merely known problems to be addressed and advanced software drops to be written and installed. As the Under Secretary for AT&L, Frank Kendall, observed in a recent interview, “I have for some time not considered the F-35 to be one of my problem programs.” Like I said, successful and boring.

In the meantime, aircraft are currently flying and the price for F-35s established for successive lots of new production aircraft continues to come down. The initial price for the F-35A, lots 1 and 2, was between $160 and $220 million per copy. The latest contract, for LRIP 9, has the price down to around $90 million a copy. The Air Force ended 18 months of negotiation with Lockheed Martin and imposed a total price of $6.1 billion for 57 aircraft in that lot.

One remaining serious issue for the JSF program is not technical at all. It is the ability of Lockheed Martin to achieve a predictable and economical production rate. At such a rate, the company can negotiate with subcontractors and suppliers for a break on the price of materials and components. The workforce and production line can function optimally.

Getting to the appropriate number of F-35s depends on Congress providing sufficient resources. Each time the Pentagon has been forced to reduce the number of JSFs it plans to buy in a given year from what had been planned the year before, it impacts the entire production process and the supply chain. The price for the next batch of aircraft cannot go down as much as expected. If Congress desires affordability it must fund an appropriate number of aircraft and do so not just for a single year but for five or even ten. Multi-year procurements for F/A-18 fighters, Black Hawk helicopters, the V-22 Osprey tiltrotor aircraft, Virginia-class submarines, DDG-51 destroyers and Chinook helicopters have all reduced unit prices significantly.