How A Looming Fiscal Crisis Could Doom America's Military Edge 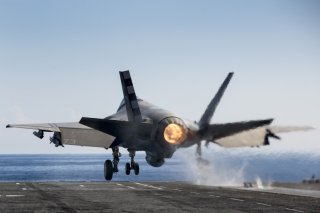 The problem with defense professionals is that defense is all they think about.  Other than spending time with the family and catching a football game on the weekend, they're all about war.  So things that impinge on their profession from outside the military realm often come as a colossal surprise.

The Budget Control Act is a case in point.  Anybody who follows U.S. politics realizes that defense is a sideshow in the struggle for power.  The big divide is between those who favor taxes and entitlements, and those who oppose them.  But if you aren't tuned into that debate, then you probably won't be prepared for what developments such as the Budget Control Act mean for your plans.

That one law has done more to erode U.S. military readiness and modernization than all of America's enemies combined in the current decade.  The reason why is that it capped military outlays (and other discretionary spending) for ten years at a time when rising funding was required to sustain training and technology investments.  The lesson is that if you are a military planner, you need to pay attention to politics here -- not just in Russia and China.

With that in mind, it would be worthwhile for Pentagon planners to take a close look at the ten-year projections of federal revenues and outlays that the non-partisan Congressional Budget Office released this month.  They present a bleak fiscal outlook for the next decade, with annual deficits returning to a trillion dollars or more annually.  Trillion-dollar deficits are what gave us the Budget Control Act in the first place, so planners should consider what their return might mean in terms of new spending constraints.

At the moment, there's little evidence military planners are giving long-term fiscal trends much thought.  The Air Force and Navy both have ambitious investment agendas in place that require peak funding in the same timeframe that federal finances are projected to go haywire.  The Army has said it is deferring major modernization initiatives until after 2020 -- when its planners assumed money would be more available due to expiration of the Budget Control Act.

Chances are, it won't be more available for three reasons.  First, the economy is projected to grow at the subpar pace of only 2% annually between 2017 and 2026, meaning tax receipts won't increase much.  Second, spending on entitlements for an aging population will balloon.  Third, the cost of financing the national debt will rise, partly because the debt grows from $20 trillion in 2017 to $28 trillion in 2026, and partly because interest rates increase.

End result: bigger and bigger annual deficits.  Specifically, the amount the government must borrow to close the gap between tax receipts and spending rises from $438 billion last year (2.5% of GDP) to $1,243 billion in 2026 (4.6% of GDP).  The upward trend in spending is driven almost entirely by rising outlays for Social Security, Medicare/Medicaid, and interest on the burgeoning debt.  Collectively, those three items account for 82% of the increase in outlays over the period 2017-2026 -- an increase that will raise government spending from $4 trillion in 2017 to over $6 trillion only ten years later.

This doesn't sound like the kind of fiscal setting in which pent-up demand for new military technology can finally be met.  Quite the opposite: recent experience suggests that when money is tight, entitlements trump defense, and within defense consumption trumps investment.  That's why the Obama Administration has generated two-thirds of the military savings mandated by the Budget Control Act by cutting modernization.  It has been more generous with readiness, and has barely touched military pay and benefits at all.

Not that Congress would have been receptive to cutting pay and benefits.  Like the decaying bridges and roads that never seem to get addressed by the domestic discretionary part of the federal budget, investment in military technology only gets funded after all the people costs have been covered.  Politicians understand that they're more likely to get re-elected by bolstering pay and benefits than by buying more warships.  So that's what they do, no matter how unbalanced the resulting defense posture looks.

This situation could be far worse midway through the next decade, when the military's current modernization plans are supposed to reach peak spending levels even though CBO says budgets will be way out of balance.  It is worth noting that the budget office compiles its projections on the assumption that current laws won't change. However, if some bright change agent like Donald Trump has his way, tax rates could be slashed in a fashion that greatly exacerbates revenue shortfalls.

Of course, it's always possible a big new threat will come along to rescue America's military from the budgetary consequences of current fiscal trends.  However, that isn't what you'd call a sound planning assumption.  A better approach would be to recognize the fiscal crisis looming in the next decade, and act now to bolster investment before the budget walls close in.

In the case of the Army, that means more generous funding of upgrades to existing combat systems so that they have greater survivability, lethality and connectivity if war with high-end adversaries like Russia occurs.  In the case of the Air Force, it means getting the ramp rate up on the F-35 fighter right away, rather than waiting for the mythical "out-years" to provide additional money.  In the case of the Navy, it means locking in a funding mechanism for the next generation of ballistic missile submarines so there are no delays in that crucial modernization effort.

More generally, military planners need to start paying attention to the warnings embedded in fiscal projections from places like the Congressional Budget Office.  If spending plans don't reflect forward fiscal realities, that is an invitation for lawmakers to take a hatchet to them -- with inevitable consequences for modernization accounts.  Also, it wouldn't hurt for the service chiefs to be a little more vocal about the human consequences of no longer having the best-trained, best-equipped military in the world.